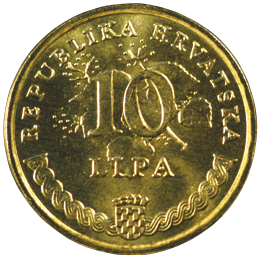 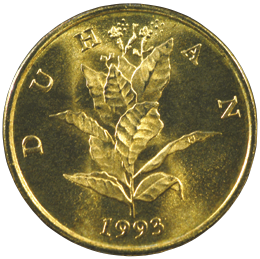 Motif on the obverse: the centre of the coin features the denomination numeral and currency name "10 LIPA" against the background showing a stylised blooming linden branch. The inscription "REPUBLIKA HRVATSKA" is displayed in the upper semi-circle along the edge of the coin. Positioned centrally along the lower edge is the coat of arms of the Republic of Croatia, bordered on its left and right sides by the Croatian wattle.

Motif on the reverse: the centre of the coin features a stylised flowering tobacco plant. The inscription "DUHAN" (Lat. NICOTIANA TABACUM) is displayed above the image, circularly along the edge of the coin. The minting year is positioned centrally along the lower edge.

TOBACCO
Tobacco has been traditionally cultivated by generations of peasants in Podravina, Slavonia and Dalmatia. The first record of tobacco planting comes from the Đurđevac area, dated as early as in 1571. Tobacco's primary economic value is that of an industrial culture.