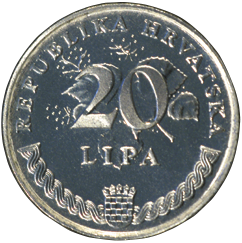 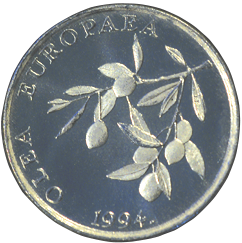 Motif on the obverse: the centre of the coin features the denomination numeral and currency name "20 LIPA" against the background showing a stylised blooming linden branch. The inscription "REPUBLIKA HRVATSKA" is displayed in the upper semi-circle along the edge of the coin. Positioned centrally along the lower edge is the coat of arms of the Republic of Croatia, bordered on its left and right sides by the Croatian wattle.

Motif on the reverse: the centre of the coin features a stylised olive branch with olives. The inscription "MASLINA" (Lat. OLEA EUROPAEA) is displayed semi-circularly along the left edge of the coin. The minting year is positioned centrally along the lower edge.

OLIVE
The olive, medicine and food, thrives exclusively in the Mediterranean. As one of the oldest and most important vegetable crops, it symbolizes peace, health and wisdom. Because of its longevity, an olive tree can live up to several thousand years. Because of its value olive oil was as precious as pure gold and was formerly stored in centuries-old stone urns. Archaeological discoveries from as early as the 8th and 9th centuries BC confirm the development of the olive growing in Dalmatia, a tradition which has continued for centuries and has grown into one of the most important economic branches in the Croatian Adriatic region.