Central bank digital currency - a new fashion or a need? 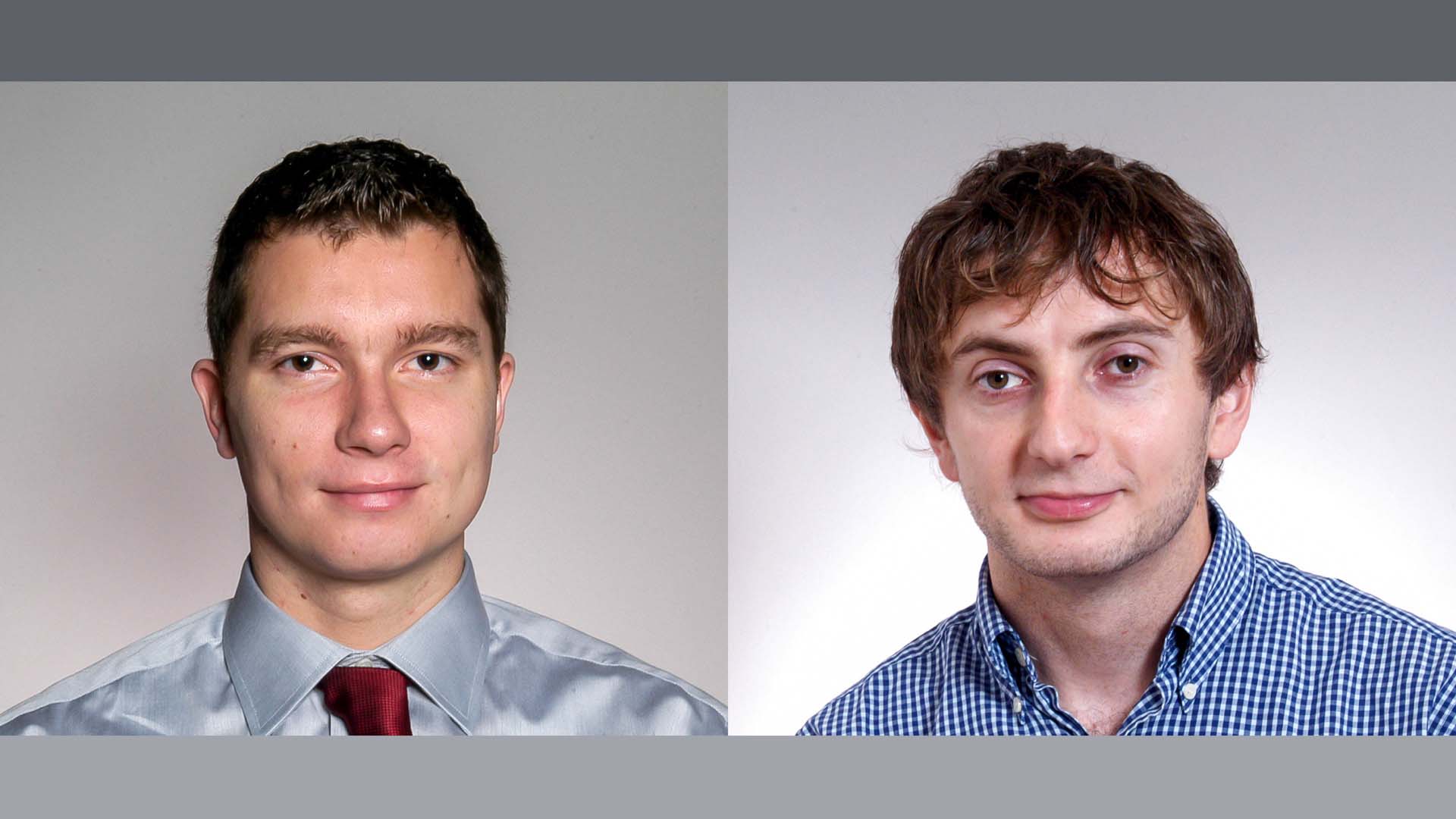 Central bank digital currency (hereinafter: CBDC) has become one of the most popular economic topics among central banks, international institutions, the academic community and market participants in recent years. However, though many central banks are exploring or testing the CBDC, there is still no CBDC in practice. [1]

The surge in interest in CBCD was strongly triggered by several factors – declining use of cash coupled by a fast development of new cashless means of payment, the emergence of various forms of cryptoassets, and the so-called stable coins (particularly Facebook-led project of digital currency Libra), the development of new technologies (smart phones, blockchain and DLT[2]), etc. However, although today's technological solutions can facilitate the issuance of the CBDC, they are not critical for its launching. The key issues are actually independent of and older than all the above-mentioned considerations, and are particularly related to the way in which the existing monetary systems operate.

Do we already have a CBDC?

First, it should be noted that one type of CBDC already exists, and it has been here for a long time. Namely, commercial banks keep digital "current" accounts (reserves) with the central bank. These accounts are used to execute two central bank tasks: implementing monetary policy and ensuring payment system efficiency and stability. This type of digital currency represents banks' claims on the central bank, i.e. central bank liability, so it can be labelled as "CBCD for banks" or a "wholesale" CBDC.

Unlike banks, individuals' access to central banks' money is limited to CBDC's physical counterpart – banknotes and coins we use in everyday life. This type of money is called cash in circulation and it represents central bank liability directly guaranteed by the central bank. So, for instance, a worn out banknote can always be exchanged for a new one at the Croatian National Bank.

Another type of digital money is held in accounts with the commercial banks by all sectors in the economy.[3] In contrast with the previously mentioned two types of money, this money is the liability of the commercial bank and not the central bank. Exchanging this type of money for physical money and vice versa (e.g. payment into/withdrawal from account at bank's cash desk or ATM) is possible only through banks as licensed financial intermediaries.

What would be the new CBDC?

The key and main distinctive feature of the "new" CBCD is that it would be central bank digital currency for all sectors in the economy, not only for commercial banks. This particularly refers to households. Such CBCD is labelled "general purpose" CBDC or "retail" CBDC. Just like cash, it would also be a central bank liability. Figure 1 gives an overview of a monetary system with the new CBCD included. 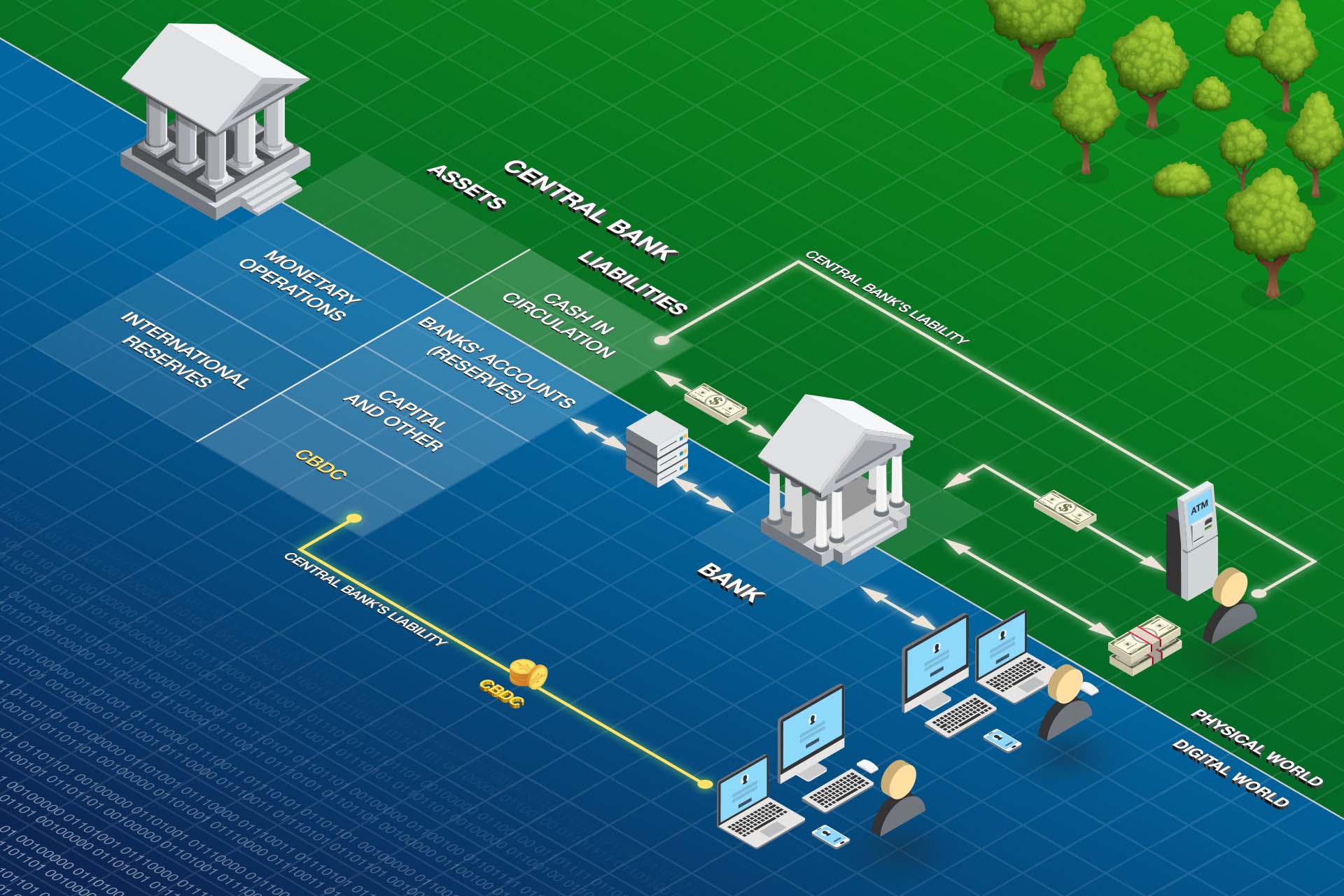 For end-users, the CBDC would be identical to the existing digital channels we already use to make payments or save – internet/mobile banking, payment cards, wearables etc. However, as regards the underlying digital infrastructure (back-end) and the possible implications for the financial system, the shift would be significant.

Possible types of the new CBDC

Unlike "anonymous" banknotes, where a presumption is that a bearer or a holder of the banknote is the legal owner, an owner of a digital unit of money in deposit account balances with the banks is the person whose name is registered as an account owner.

This is the difference between the two main concepts of the CBDC, one that would be token/value-based and the other that would be account based.[4] In other words, the account-based CBDC would be registered in the account held by an individual with the central bank, much in the same way as is the case of accounts with commercial banks. By contrast, the token/value-based CBDC would be more like cash, potentially anonymised and a device-linked (smart phone).

Open issues and challenges of the CBDC

One of the main reasons why the CBDC is not in use yet probably lies in the fact that the choice of its design could have an impact on the numerous central bank tasks and have broader social implications. Also, the CBDC has to cope with issues which need to be clearly recognized, defined and remedied. To meet that, the following aspects are of particular importance:

For a CBDC to be as successful as cash these questions need to be addressed. Additionally, features like safety, exchangeability, resilience, cost efficiency and adaptability, accessibility (how to ensure that the system works off-line) should be ensured simultaneously.

CBDC could emerge but not so soon

Regardless of its design, the launching of the CBDC will be based on the actual needs of the economy and possible enhancements in central bank tasks. This is primarily related to preserving the public role of the money amid digitalisation of payment services and a decline in cash usage. As recently underlined by Deputy Governor of the Swedish central bank, CBDC should be an evolution and not a revolution of currency issuance.[5]

A lot of open questions and challenges remain and it is still unknown whether the benefits of the new CBDC would exceed the costs and risks. The development of payment systems and increasing share of digital transactions certainly speak in favour of the introduction of the CBDC, however, being a complex concept, the implementation of CBDC takes time.

In case of Croatia, having in mind current characteristics of the country's monetary system and the important role that cash still plays (Figure 2), the launching of a CBDC - a digital kuna - is neither economically nor strategically justified yet.

Also, in view of the strategic commitment towards the introduction of the euro and the fact that the ECB recently launched a public discussion on the possible issuance of the so-called digital euro, Croatia is more likely to witness a digital euro than digital kuna.

FIGURE 2 Stock of cash is rising and it is a main mean of payment in Croatia, but its share in transactions is gradually declining 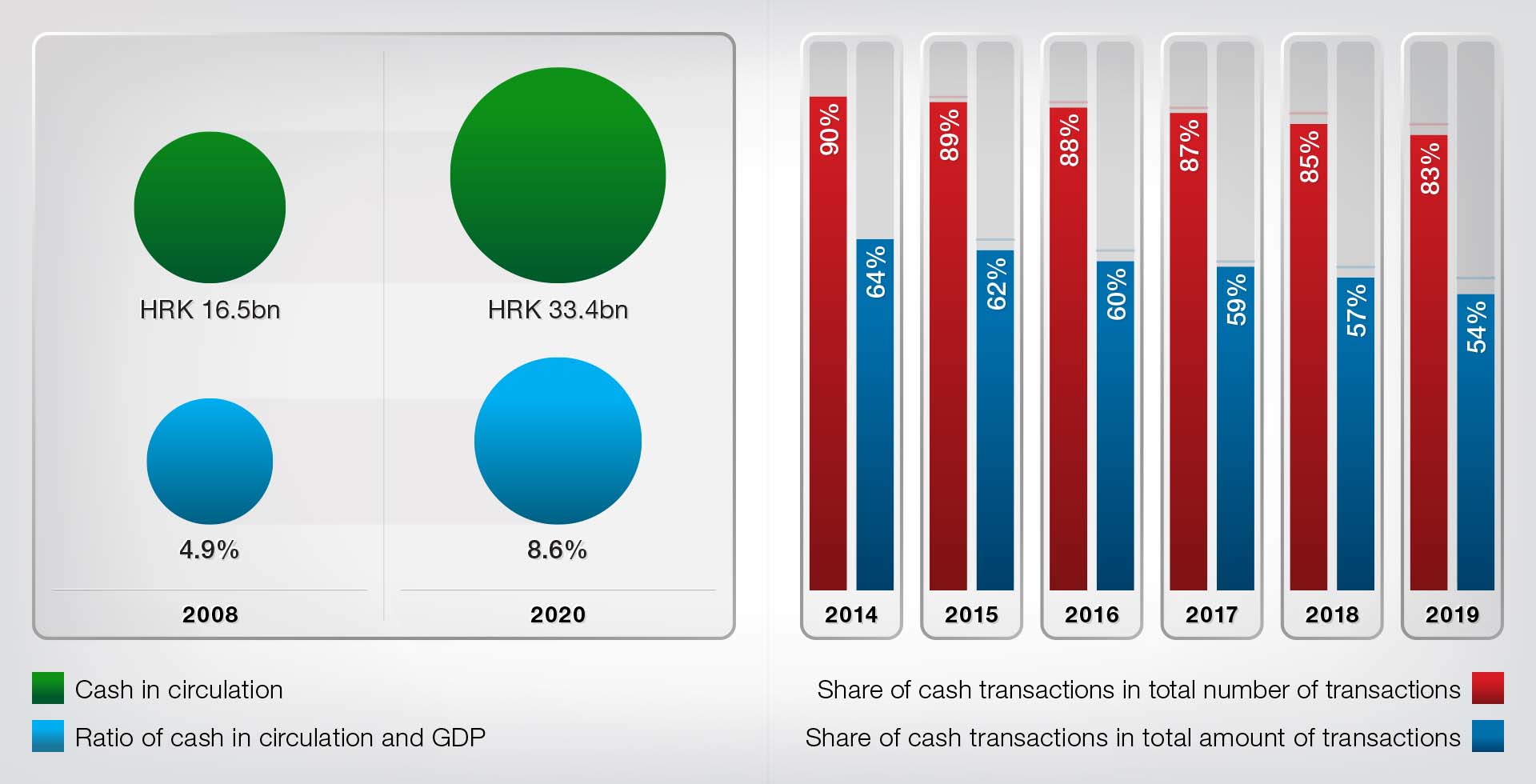