As a member of the European System of Central Banks (ESCB), the CNB develops, produces and publishes ESCB statistics for the RC in line with the basic principles of the Public Commitment on European Statistics by the ESCB. A brief summary of the role and importance of the ESCB statistics is presented in the video "Reliable source of European statistics".

The Croatian Bureau of Statistics, the Ministry of Finance and the Croatian National Bank are the signatories to the Cooperation Agreement in the Field of National Accounts of the General Government and Associated Statistics.

As a general rule, the data published on this page are grouped by institutional sectors and financial instruments.

The Croatian National Bank uses the ESA 2010 standard for all its official statistics and ESCB statistics, which implies sectoral classification of the reporting units and their counterparties in accordance with the Decision on the statistical classification of institutional sectors, published by the Central Bureau of Statistics (CBS). This classification by sectors is based on the European System of Accounts (ESA 2010), a mandatory statistical standard of the European Union, and is aligned with the basic international statistical standard – the System of National Accounts (SNA 2008). 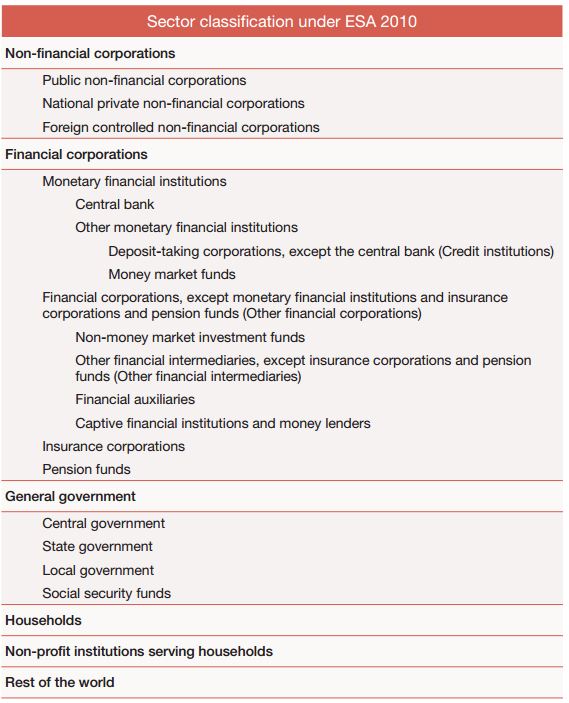 Non-money market investment funds consist of all forms of collective investment schemes, except those classified in the money market funds subsector, which are principally engaged in financial intermediation. Their business is to issue investment fund shares or units which are not close substitutes for deposits and, on their own account, to make investments primarily in long-term financial assets.

Other financial intermediaries are institutions which are principally engaged in financial intermediation by incurring liabilities in forms other than currency, deposits, and close substitutes for deposits. They include leasing companies, factoring corporations, banks undergoing liquidation or bankruptcy proceedings, credit unions, etc.

Pension funds consist of all financial corporations and quasi-corporations, which are principally engaged in financial intermediation as a consequence of the pooling of social risks and needs of the insured persons (social insurance). Pension funds as social insurance schemes provide income in retirement, and often benefits for death and disability.

The general government sector consists of institutional units which are non-market producers whose output is intended for individual and collective consumption, and are financed by compulsory payments made by units belonging to other sectors, and institutional units principally engaged in the redistribution of national income and wealth.

The rest of the world sector is a grouping of units without any characteristic functions and resources; it consists of non-resident units insofar as they are engaged in transactions with resident institutional units, or have other economic links with resident units. Its accounts provide an overall view of the economic relationships linking the national economy with the rest of the world. The institutions of the EU and international organisations are included. The rest of the world sector includes all foreign natural and legal persons.