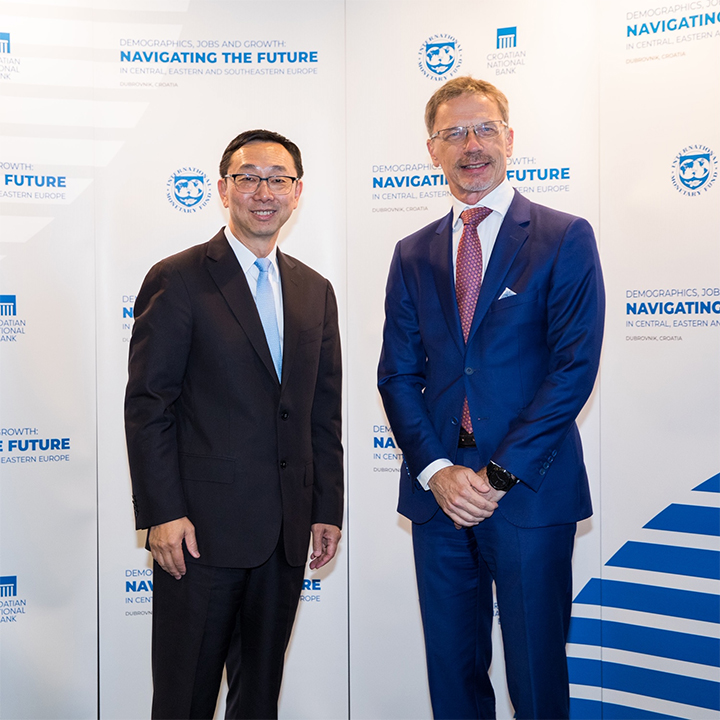 The second joint conference entitled “Demographics, Jobs and Growth: Navigating the Future in Central, Eastern and Southeastern Europe”, organised by the Croatian National Bank (CNB) and the International Monetary Fund (IMF), will begin today in Dubrovnik. This year’s conference focuses on labour market and demographic challenges, the future of labour, and policies needed to sustain growth and reach Western European levels of income. During the first part of the conference, panelists will discuss the economic developments and capacity constraints arising from labor market shortages and skill mismatches.

The issues of ageing population, emigration and the impact of these demographic shifts on income growth and convergence, will be addressed in the second part of the conference. Panelists will also discuss the potential role of technology, alongside other policies, in mitigating the adverse impact of demographic trends.

The third panel will explore the future of work in the countries of Central, Eastern and Southeastern Europe (CESEE) and the role of government policies and the private sector in addressing adverse demographic trends and increasing productivity. It will also examine the fiscal consequences of demographic headwinds and zoom in on lessons from countries that are making the greatest progress in tackling labour market bottlenecks and demographic challenges.

This conference, jointly organized by the IMF and CNB, deals with crucial economic issues such as the significant decline in the future labour force in CESEE countries - due to ageing and emigration - that require additional policies in order to support higher labor force participation and promote the development of human capital fit for the digital age, said the Governor of the Croatian National Bank Boris Vujčić. Thus, the conference is an excellent opportunity to highlight considerable challenges of properly defining, adequately selecting and fruitfully combining these policies, as well as to extensively explore country and region-specific issues pertaining to structural reforms in education system, pension system and labour market, said the Governor.

Mr. Tao Zhang, Deputy Managing Director of the IMF said: “The conference will address one of the most significant challenges for the region – a shrinking and aging population. A new IMF study to be released tomorrow highlights that Central, Eastern, and Southeastern Europe will face a sharp decline in the labor force, with adverse consequences for potential growth, living standards, and public finances. A comprehensive policy response will be needed, and I am confident that the region can rise to the challenge. I look forward to a constructive discussion about what can be done to boost the labor force, raise productivity and ensure new technologies play a positive role.”

In addition to the IMF and CNB representatives, the conference participants will include Andrej Plenković, Prime Minister of the Republic of Croatia, and about fifteen CESEE central bank governors and finance ministers, the representatives of the World Bank, the European Commission, the Bank for International Settlements and other institutions, as well as experts from the universities of Oxford, London and Tartu.