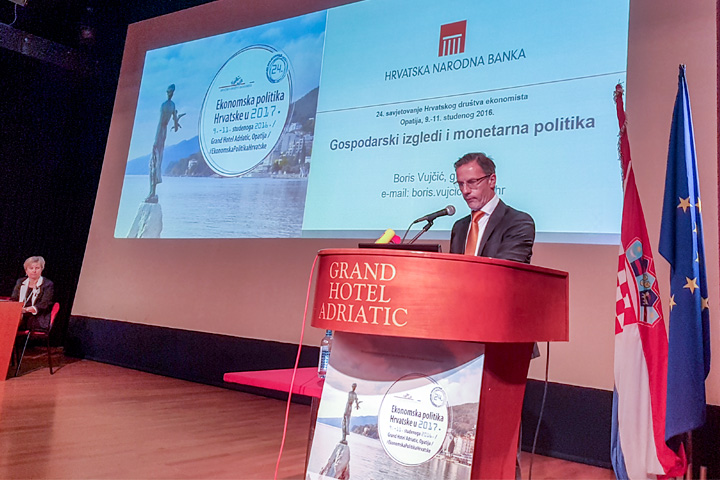 Croatia's economy is recovering, though at a slower pace than that of comparable Central and Eastern European countries, said Boris Vujčić, Croatian National Bank Governor, in the introductory part of the speech delivered on 9 November 2016 at the 24th Croatian Economic Association Conference in Opatija. Of these countries, only Croatia has not yet reached the pre-crisis GDP level. However, what is positive is that the recovery in economic activity in Croatia has been mostly driven by a considerable growth in goods and services exports, coupled with a visible recovery in personal consumption and investments associated with favourable developments in consumer and business optimism. Increased exports had a positive effect on the surplus in the current and capital account and, along with further deleveraging abroad, aided the stability of the exchange rate of the domestic currency.

The fall in the general level of prices witnessed in Croatia is mostly spurred by import prices, so it can be said that deflation risks are not present, noted the Governor. Thus the diffusion of a fall in prices is decreasing gradually, i.e. the share of products whose prices are rising is increasing, the burden of household debt repayment is decreasing and nominal wages are growing faster. Similarly, corporate profits are also recovering, having reached in 2015 almost their pre-crisis 2008 level.

In 2016, the expansionary monetary policy of the CNB was further boosted by structural repo operations, noted the Governor. So far three auctions were held at which a total of almost HRK 1bn were placed. The aim of these operations was to ensure to the banks longer term sources of kuna liquidity (operations maturing in four years) at a low interest rate. The interest rate at the first auction was 1.8% and was then cut to 1.4% (interest rates at regular repo operations were cut from 0.8% to 0.5% and then to 0.3%). Structural repo operations contribute to the lowering of the kuna yield curve on medium/longer maturities, the development of the domestic market for kuna government securities and encourage the banks to increase kuna lending. In addition to structural operations, the CNB helps support the system's kuna liquidity by regular weekly operations. It has been observed that mostly the small banks which took part in structural repo operations were able to halt the fall in lending and increase kuna loans, in contrast with the previous year.

The conditions of financing on the domestic market are steadily improving for all the sectors. Banks' interest rates for households and the corporate sector have been falling steadily and are now historically low. The yields on T-bills of the Ministry of Finance have also reached the lowest levels ever, and the yield curves on government bonds of all maturities have been falling. Favourable developments are also seen in the easing of lending standards and a visible jump in credit demand. In such conditions, placements to enterprises grew in 2016. A rising number of activities is witnessing placements growth, so activities such as agriculture, manufacturing, trade, the real estate sector and tourism are witnessing an increase in lending. A new development is also a considerable jump in kuna lending, particularly to households but also to the corporate sector. This helps in particular the recovery in the domestic credit activity and gradual deposit deeurisation.

In the past two years the banks have stepped up their efforts to clean up their balance sheets, writing off and selling placements, particularly corporate placements, a development in part driven by CNB's prudential measures increasing provisions for non-performing placements. More specifically, in 2013, the CNB tightened the standards for the coverage of non-performing placements by provisions. Banks failing to actively address the issue of NPLs are obligated to gradually increase provisions for such placements, irrespective of their coverage by collateral. The process of resolution and cleaning up of the backlogs of non-performing placements on banks' balance sheets is certainly a favourable trend which might help reduce the scope of the issue of over-indebtedness and lay sound foundations for a new credit cycle for all the domestic sectors.

The CNB will continue to pursue an expansionary monetary policy, reiterated the Governor in conclusion. Thus the CNB will continue to support high banking system liquidity by structural repo operations, regular repo operations and, if necessary, by foreign exchange transactions. Such a policy helps improve the domestic financing conditions and provides support to the recovery in the domestic credit activity. This is what the CNB can do and what it can influence under the circumstances, taking care at the same time that the stability of the exchange rate of the domestic currency and overall financial stability of the system are maintained.

In his closing remarks, Governor Vujčić said that we should bear in mind that the current situation posed some mid-term risks to financial stability, both in Europe and in the domestic market, and that it was uncertain how long the situation in the international market would continue to make such a degree of accommodation or such an expansionary character of the monetary policy possible. Therefore, it would be wrong to rely on such a degree of expansionary monetary policy as a basis for growth over a medium term. It is the improved competitiveness of the domestic economy, based on structural reforms and exports growth, concomitant with the containment of macroeconomic imbalances and further consolidation of public finances that must be the basis for a stronger economic recovery.