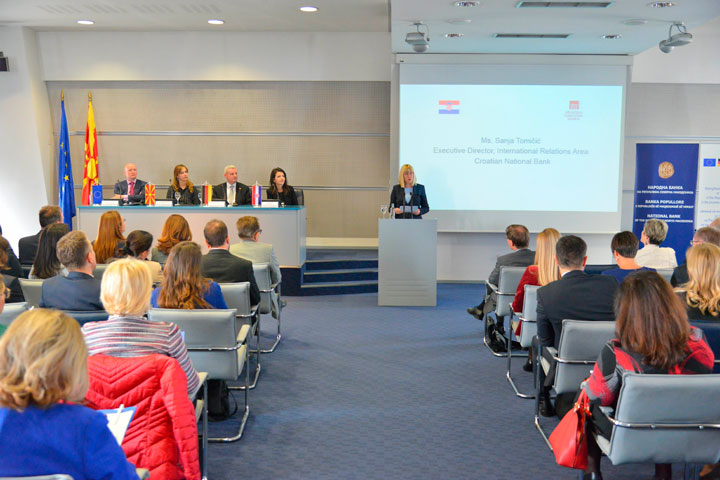 The Executive Director of the CNB’s International Relations Area, Sanja Tomičić, held a presentation on 30 October 2019 at the opening conference of the Twinning project entitled “Strengthening of the Institutional Capacity of the National Bank of the Republic of North Macedonia in the Process of its Accession to the European System of Central Banks”.

The main objective of the project is to support the central bank of the Republic of North Macedonia in maintaining macroeconomic and financial stability through a further harmonisation of rules, regulations, policies and the operation with the standards of the European System of Central Banks (ESCB) and the best international practices. This Twinning project, funded by the European Union with EUR 600,000, will be implemented from September 2019 until December 2020. A consortium of the central banks of the Federal Republic of Germany and the Republic of Croatia will participate in its implementation, with the involvement of experts from the central banks of other EU member states.

The planned activities to be implemented within the four project components: payment services and payment systems, banking regulations and supervision, financial accounts statistics and enhancement of know-how in policy analysis, were presented at the opening conference. CNB experts will be involved in the part of project activities that concern payment services, banking regulations and financial accounts statistics. A CNB representative, Gordana Miškić, also plays the role of the Resident Twinning Advisor and will stay in the beneficiary country during the whole duration of the project and coordinate relevant project activities. 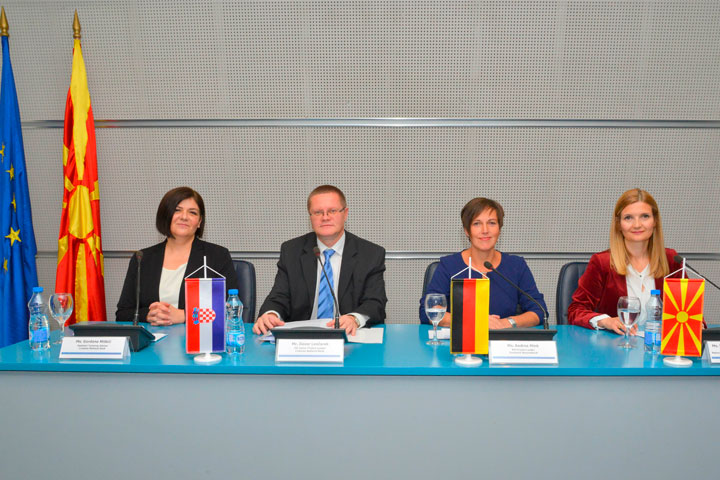 The consortium implementing a Twinning project for the financial sector in Montenegro “Support to Regulation of Financial Services” involves the central banks of Germany, Croatia and the Netherlands, and the German and Croatian financial supervisory agencies (BAFIN and HANFA). In this project, worth EUR 1,410,000, implemented from April 2018 until April 2020, beneficiary institutions include the Central Bank of Montenegro, the Insurance Supervision Agency and the Securities and Exchange Commission of Montenegro. For the most part, CNB experts are engaged in the area of regulations related to the operation of credit institutions, and to a lesser extent in the area of financial stability. A CNB representative, Davor Holjevac, is the Resident Twinning Advisor on this project. The Twinning project for the National Bank of Serbia “Strengthening of the Institutional Capacities of the National Bank of Serbia in the Process of EU Accession”, worth EUR 800,000, is implemented from September 2018 until March 2020. The consortium includes the central banks of Germany, Croatia and Romania, as well as the Croatian Financial Services Supervisory Agency, which is involved in the implementation of a part of the project. CNB experts are engaged in the establishment of the framework for monitoring the effects of liberalisation of capital movements, monetary and financial statistics and enhanced international relations function of the NBS, in particular with regard to EU institutions.

CNB experts, together with other 19 central banks of the ESCB and led by the Deutsche Bundesbank, participate in the regional “Programme for Strengthening the Central Bank Capacities in the Western Balkans with a View to the Integration to the European System of Central Banks”. This project, worth EUR 2 million, is implemented from March 2019 until March 2021. Component One of the Programme foresees the holding of 20 training events, each lasting three days, on the topics concerning central banking. The CNB hosts three seminars on the topics of monetary statistics, payment systems and financial stability. Component Two of the Programme foresees the implementation of two bilateral measures benefiting each of the beneficiary central banks. It is planned that the CNB experts would participate in two measures concerning financial accounts statistics and the strengthening of the central bank’s international and European relations function.