Comments on monetary developments for August 2021

Total liquid assets (M4) continued to increase in August, mostly due to a strong inflow of foreign currency from tourism during the peak tourist season.

Total placements of monetary institutions to domestic sectors (except the central government) decreased in August on the back of the drop in placements to corporates and other financial institutions, while placements to households continued to grow slowly.

Total liquid assets (M4[1]) grew by HRK 8.7bn (2.2%, based on transactions) in August from the month before, due to a strong rise in net foreign assets (NFA) of credit institutions driven by seasonal increase in the inflow of foreign currency from tourism, ending the month at HRK 398.3bn (Table 1). At the same time, net domestic assets (NDA) decreased, mostly as a result of a decline in net claims on central government (i.e. increase in foreign currency government deposits with the CNB). Money (M1[2]) went up by HRK 1.7bn (0.9%) in August from the previous month, primarily due to the increase in corporate demand deposits, whereas quasi-money rose by HRK 6.9bn (3.4%, based on transactions), reflecting the rise in corporate foreign currency deposits and foreign currency deposits of households (Table 3). On an annual level, the growth rate of M4 shows a stronger seasonal increase relative to the previous year, and thus accelerated to 11.1% in August from 9.7% in July, while M1 picked up from 19.6% to 19.8%, based on transactions (Figure 1).

Total placements of monetary institutions to domestic sectors (except the central government) decreased by HRK 0.5bn or 0.2% from July to August (based on transactions), ending the month at HRK 241.4bn. The annual growth rate of total placements remained at 4.1%, unchanged from the month before (Figure 2). Total loans, which account for the largest share of total placements, decreased by HRK 0.4bn (0.2%) on a monthly level, with a fall in loans to corporates (HRK 0.7bn or 0.8%) and to other financial institutions (HRK 0.1bn or 0.6%), and a growth in loans to households (HRK 0.3bn or 0.2%, Table 2). A slight increase in loans to households was driven by the growth in housing loans (HRK 0.4bn or 0.6%), while general-purpose cash loans remained almost unchanged. On an annual level, the growth of housing loans continued to accelerate (from 10.6% to 10.8%), as was the case with general-purpose cash loans (from 0.6% to 0.8%), resulting in an acceleration in the growth of total loans to households, from 4.3% to 4.6%. Such acceleration is slightly less pronounced than in the previous months, when lending to households was under the influence of the implementation of the government subsidy programme. On the other hand, the annual growth rate of corporate loans edged down from 1.6% to 1.3%, with a continued stagnation present since March this year. 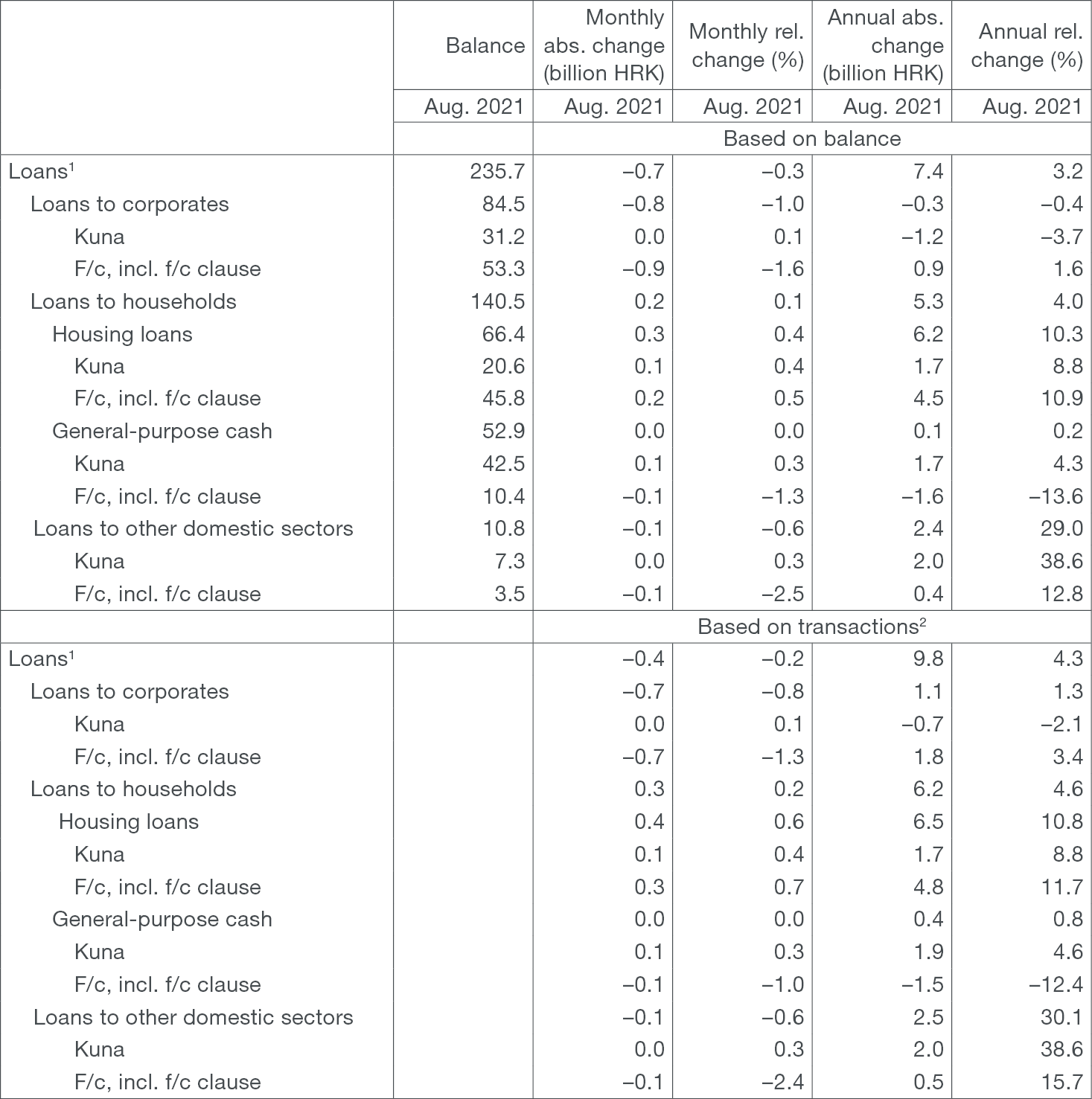 1 In addition to loans to households and corporates, they also include loans to the local government and other financial institutions.
2 The transactions show changes that exclude the effects of exchange rate changes, securities price adjustments, reclassification and write-off of loans, including the sale of loans in the amount of their value adjustment.
Source: CNB 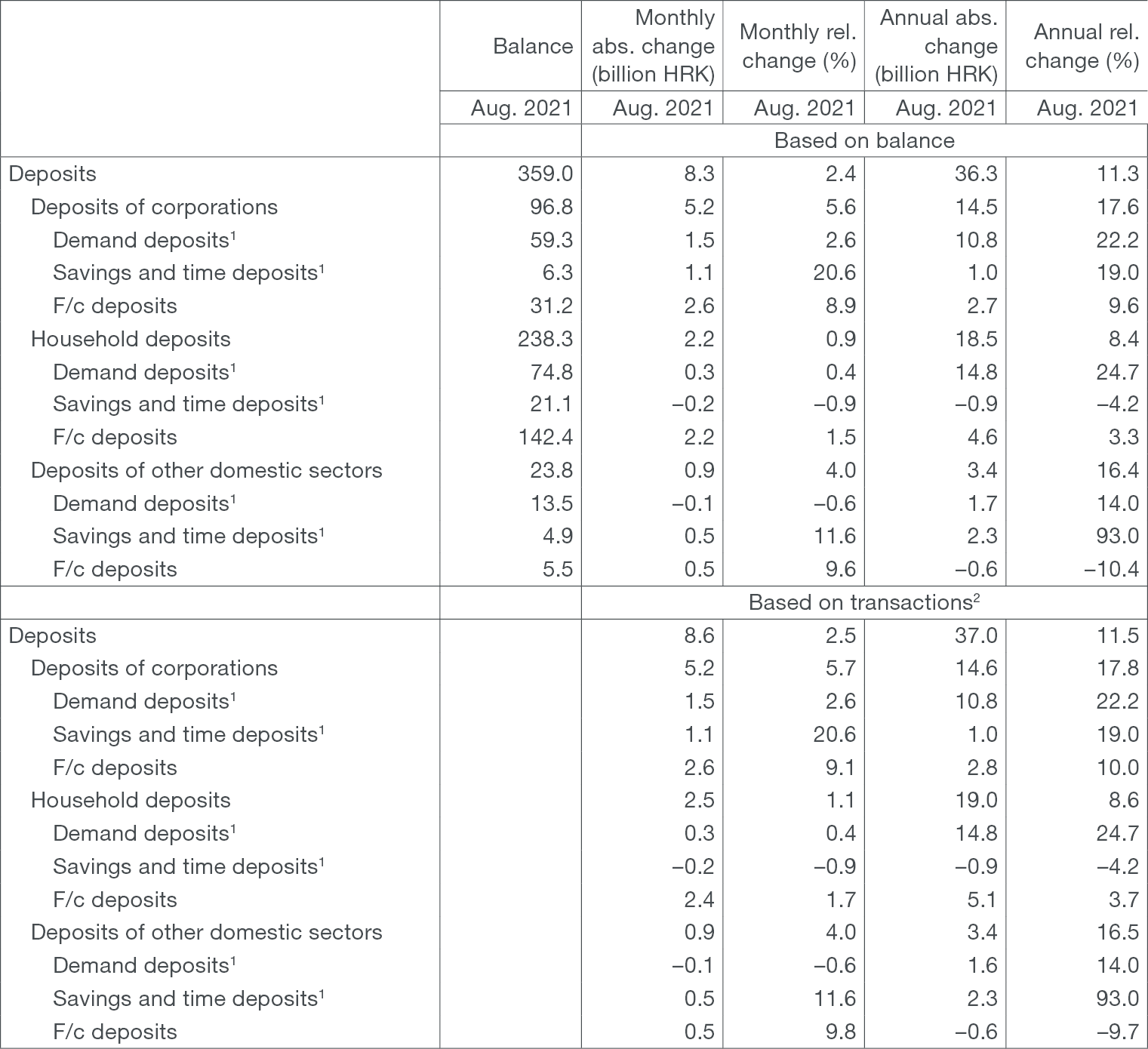 1 Includes only kuna sources of funds of credit institutions.
2 The transactions show changes that exclude the effects of exchange rate changes, securities price adjustments, reclassification and write-off of loans, including the sale of loans in the amount of their value adjustment.
Source: CNB

For detailed information on monetary statistics as at August 2021, see: