Comments on monetary developments for August 2022

Total liquid assets (M4) grew in August due to the rise in net foreign assets (NFA) of credit institutions driven by the seasonal inflow of foreign currency from tourism. This inflow also spurred the surge in total foreign currency deposits, that is, quasi-money, while money (M1) dropped, with currency outside credit institutions recording the sharpest monthly decrease since the introduction of the kuna.

Total placements of monetary institutions to domestic sectors (excluding the central government) edged up in August, equally due to the growth in household loans and corporate loans; the year-on-year increase in corporate loans continued to pick up sharply because of the slump in lending last August.

Total liquid assets (M4[1]) rose by HRK 6.5bn in August (or 1.5%, based on transactions), standing at HRK 440.7bn at the end of the month (Table 1). M4 growth reflected the increase in net foreign assets (NFA) of credit institutions (of HRK 10.6bn) driven by the seasonal increase in the inflow of foreign currency from tourism. Net domestic assets (NDA) dropped in the same period, largely reflecting the fall in net claims on the central government (due to the large growth in government deposits with the CNB). Money (M1[2]) shrank in August (by HRK 2.1bn or 1.0%), with currency outside credit institutions recording the sharpest monthly decrease since the introduction of the kuna. The gradual decline in currency over the recent months may be associated with the approaching introduction of the euro at the beginning of 2023. At the same time, driven by the largest-ever increase in total foreign currency deposits (of HRK 8.8bn or 4.4%), quasi-money recorded a surge of HRK 8.7bn or 3.8% (all based on transactions) (Table 3). As regards the structure of foreign currency deposits, particularly strong growth was seen in corporate deposits (of 10.8% vs 2.5% in household deposits), which may be attributed to the continued good performance of the peak tourist season and increased liquidity needs of energy sector corporations. On an annual basis, the growth of M4 and M1 slowed down to 9.7% and 9.5%, respectively (Figure 1), while the rise in quasi-money picked up to 10.1% on the back of the surge in foreign currency deposits of 14.6% (all based on transactions).

Total placements of monetary institutions to domestic sectors (except the central government) grew by HRK 0.7bn in August (or 0.3%, based on transactions) and their annual growth accelerated from 8.9% in July to 9.5% in August (Figure 2). The monthly increase in placements was completely accounted for by loans as the prevailing item of placements (Table 2), with loans to non-financial corporations and loans to households growing by almost the same amount (HRK 0.5bn). Notwithstanding the slower monthly growth in corporate loans, which was due to the base effect, that is, the drop in corporate loans in August 2021, their annual increase accelerated further (to 17.2% in August, up from 15.7% in July). Demand for loans remained fairly robust owing to the soaring prices of imported energy products and raw materials, which increased the cost of their procurement, as well as corporate attempts to borrow before the tightening of financing conditions. As regards household loans, after growing rapidly for three months, they rose only marginally in August, mostly on the back of housing loans (HRK 0.5bn). Such trends in household loans reflect the effect of the last round of the government housing loans subsidy programme. General-purpose cash loans also edged up (by HRK 0.1bn). The increase in housing and general-purpose cash loans accelerated slightly in annual terms (to 9.4% and 3.8%, respectively), so that the annual growth rate of total household loans grew only barely, from 5.5% to 5.6%. 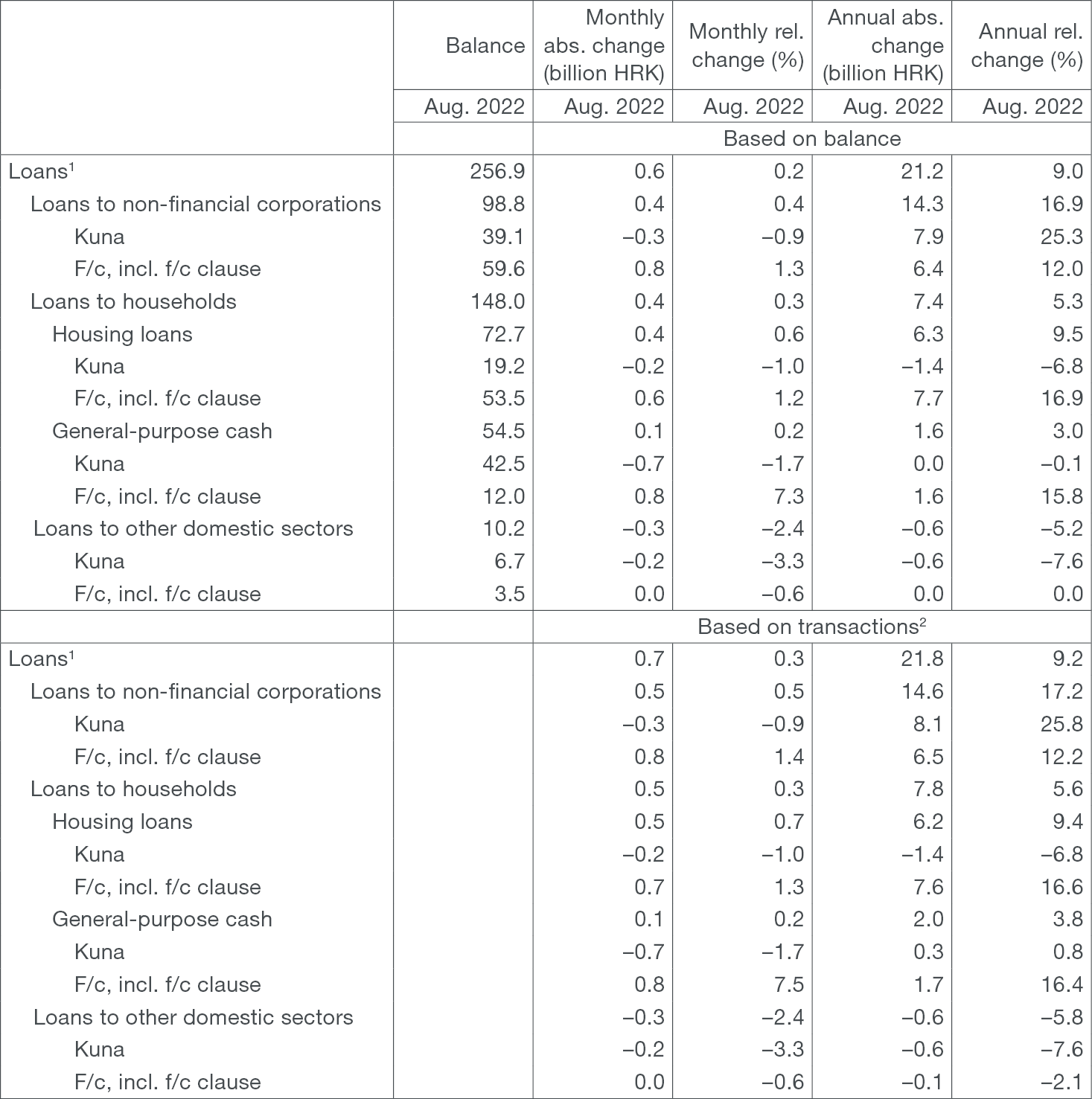 1 In addition to loans to non-financial corporations and households, they also include loans to the local government and other financial institutions.
2 The transactions show changes that exclude the effects of exchange rate changes, securities price adjustments, reclassification and write-off of loans, including the sale of loans in the amount of their value adjustment.
Source: CNB. 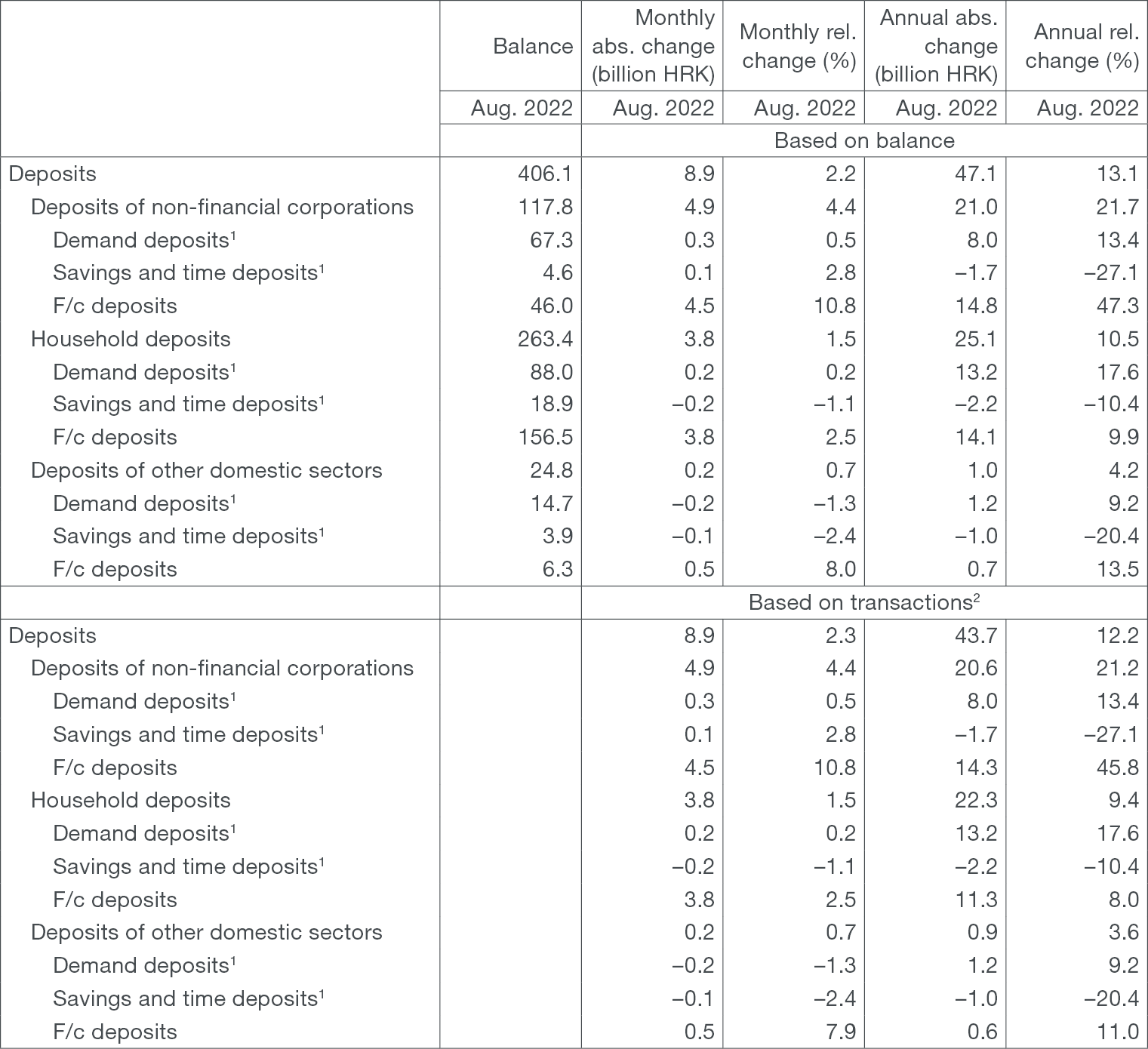 1 Includes only kuna sources of funds of credit institutions.
2 The transactions show changes that exclude the effects of exchange rate changes, securities price adjustments, reclassification and write-off of loans, including the sale of loans in the amount of their value adjustment.
Source: CNB.

For detailed information on monetary statistics as at August 2022, see: