Comments on monetary developments for February 2021

Total liquid assets (M4) and money (M1) increased in February 2021. The growth of both M4 and M1 slowed down slightly on an annual level, oscillating within their usual monthly bands. Monetary aggregates, nevertheless, continued their strong growth.

Total placements of monetary institutions to domestic sectors (except the central government) increased negligibly in February. Placements to households increased mildly, to the greatest extent due to subsidies to housing loans, while placements to corporates remained virtually unchanged. The growth of total placements on an annual level slowed down substantially due to the base period effect, i.e. intensive lending in February of last year.

Total liquid assets (M4[1]) increased in February 2021 by HRK 1.3bn (0.4%, based on transactions), reaching HRK 366.6bn at the end of the month (Table 1), as a reflection of the increase in net domestic assets (NDA) of the monetary system and the decrease in net foreign assets (NFA). The increase in NDA was largely accounted for by the noticeable increase in net claims from the central government and the fall in NFA by the decrease in assets abroad. As regards the components of total liquid assets, money (M1[2]) went up by HRK 2.4bn (1.5%) from the previous month, primarily due to the increase in demand deposits of households and a mild increase in money outside credit institutions in February. In the same period, quasi-money decreased by HRK 1.0bn (0.5%, based on transactions), to the greatest extent due to the contribution of the decrease in foreign currency deposits of non-financial corporations (Table 3). On the annual level, the growth of M4 slowed down slightly from 8.8% in January to 8.6% in February and the growth of M1 from 18.7% to 18,0%, based on transactions (Figure 1).

Total placements of monetary institutions to domestic sectors (excluding the central government) increased negligibly in February (by HRK 0.3bn or 0.1% from January, based on transactions), ending the month at HRK 240.0bn. Their annual growth slowed down from 3.9% to 3.0% (Figure 2). In the same period, total loans, accounting for 98% of total domestic placements (excluding the central government), increased by HRK 0.4 bn (0.2%). The loan structure reflects a growth in loans granted to households (HRK 0.3bn or 0.2%), while corporate loans and loans to other financial institutions remained virtually unchanged on a monthly level (Table 2). The lion's share of loans to households consisted of housing loans, which went up by HRK 0.5bn (0.7%) in February from the previous month, thus continuing to reflect the effects of the loan subsidy programme. Cash general-purpose loans registered a mild growth of HRK 0.1bn (0.1%) in February, following a monthly fall observed during the last quarter of the past year. On an annual level, the growth of housing loans accelerated from 8.2% to 8.7%, while cash general-purpose loans continued to increase their fall (from –2.3% to –3.0%), so the annual growth of loans to households slowed down from 1.8% to 1.6%. The growth of loans to corporates slowed down on an annual level from 6.2% to 4.4%, due to the effect of the base period, that is, due to substantially more prominent growth of lending to this sector in the same period last year. 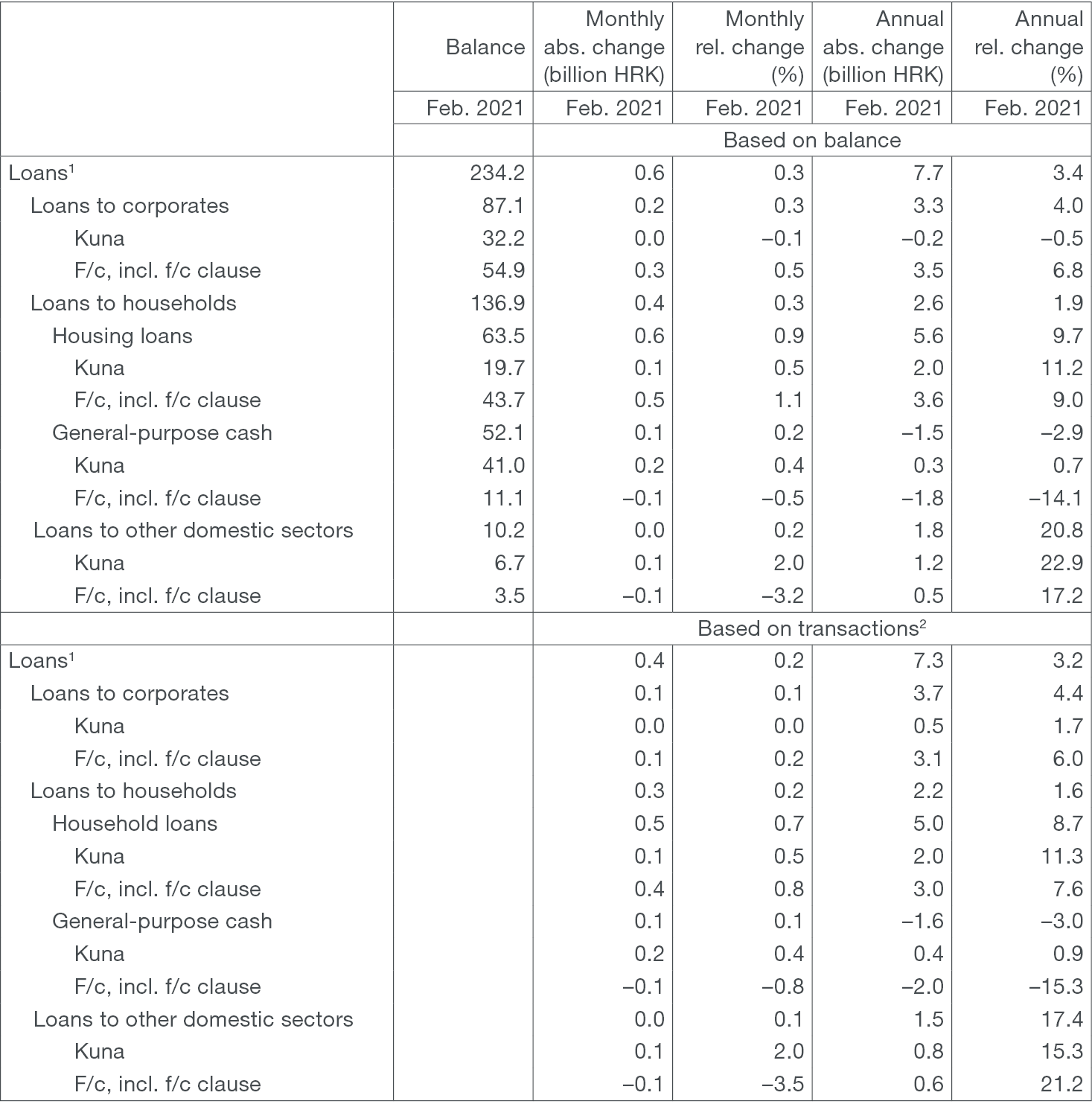 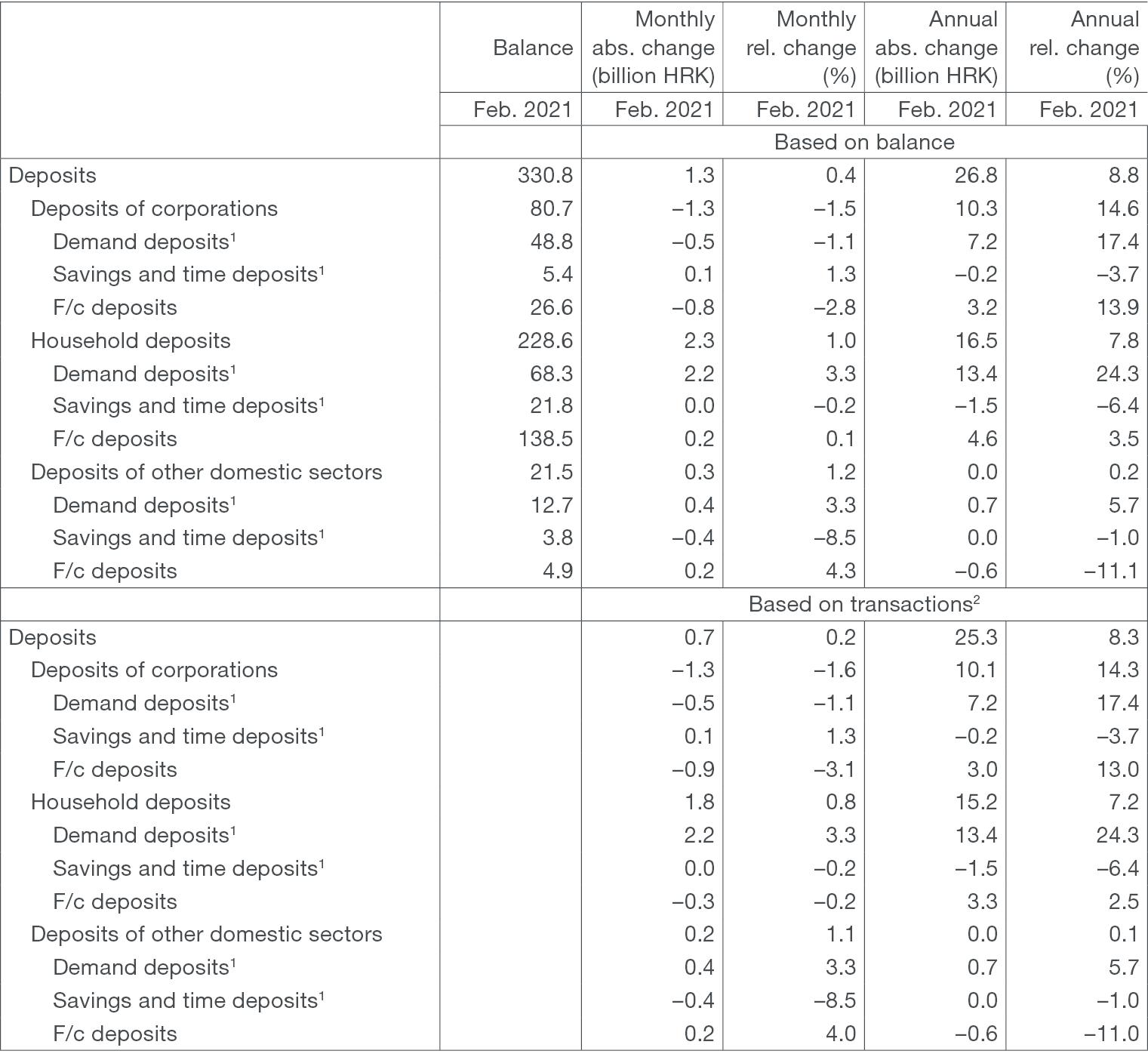 For detailed information on monetary statistics as at February 2021 see: