Comments on monetary developments for January 2021

Total placements of monetary institutions to domestic sectors (except the central government) continued to grow on a monthly level, primarily due to the growth of placements to non-financial corporations, but also to households. Loans to households increased to the largest extent due to the increase in housing loans under the impact of loan subsidies, while on the other side cash general-purpose loans continued on their months-long downward path.

Total liquid assets (M4 [1]) decreased slightly in January 2021 (by HRK 0.5bn or 0.1%, based on transactions) (Table 1), mirroring the slight decrease in both of its components, net domestic assets (NDA) and net foreign assets (NFA) of the monetary system. A breakdown of M4 components through monetary system's liabilities reflects a HRK 1.6bn (1.0%) increase in money (M1 [2]), while quasi-money decreased by HRK 2.1bn (1.0%). The growth in money was primarily aided by the growth in demand deposits of households, but also by a very mild growth in money outside credit institutions, which usually goes down in January under the influence of seasonal factors. On the other side, the decrease in foreign currency deposits of non-financial corporations was the main reason for the decrease in quasi-money (Table 3). On the annual level, the growth of M4 decreased from 9.1% in December 2020 to 8.8% in January 2021 because of the base period effect of an uncharacteristic increase in that monetary aggregate at the beginning of 2020 when it usually registers a decline. However, the annual growth in M4 remained strong. The growth of quasi-money growth slowed down from 3.6% in December 2020 to 2.1% in January 2021, while that of M1 accelerated from 17.0% to 18.7% (based on transactions) (Figure 1).

Total placements of monetary institutions to domestic sectors (excluding the central government) increased by HRK 0.7bn on a monthly level (0.3% based on transactions), ending January at HRK 239.4bn. Observed on an annual level, the growth in total placements held steady in January, at 3.9% (based on transactions) (Figure 2), the same level as in the previous month. In the total amount of placements, loans accounted for HRK 233.6bn. Loans granted to non-financial corporations went up by HRK 0.5bn in January (0.5%), their annual growth reaching 6.2% as compared to 6.0% registered in December of the previous year (based on transactions). Household loans continued to grow in January (HRK 0.2bn or 0.2% from the previous month, based on transactions), with housing loans going up by HRK 0.6bn (1.0%) and continuing to reflect the effect of government subsidies, while cash general-purpose loans continued to decline (HRK 0.2bn or 0.5%) (Table 2). Despite the acceleration in the growth of housing loans from 7.5% to 8.2% on an annual level, the growth of household loans slowed down from 2.1% to 1.8% as a result of the deterioration of the fall in cash general-purpose loans from –1.4% to –2.4% (based on transactions). 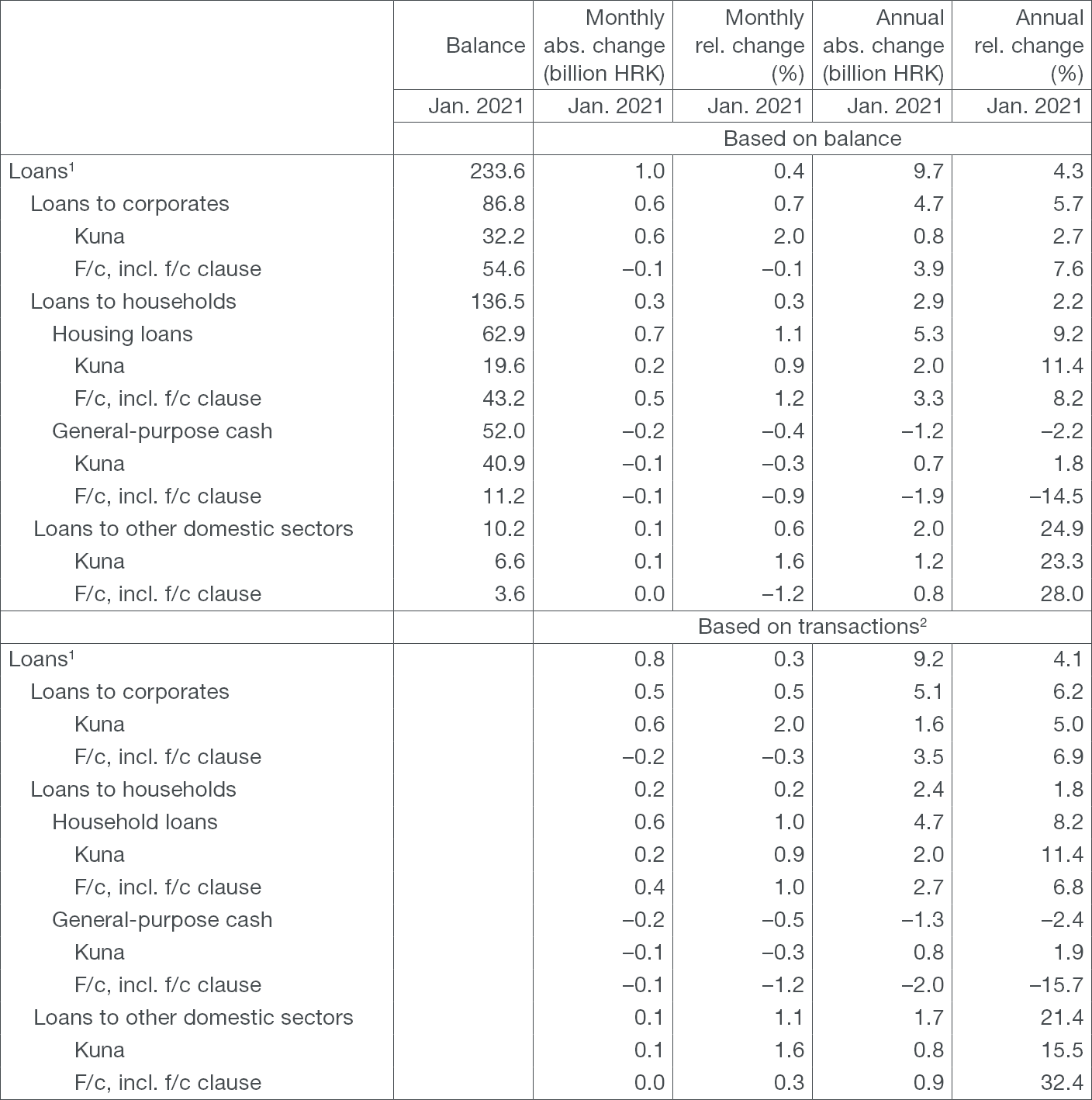 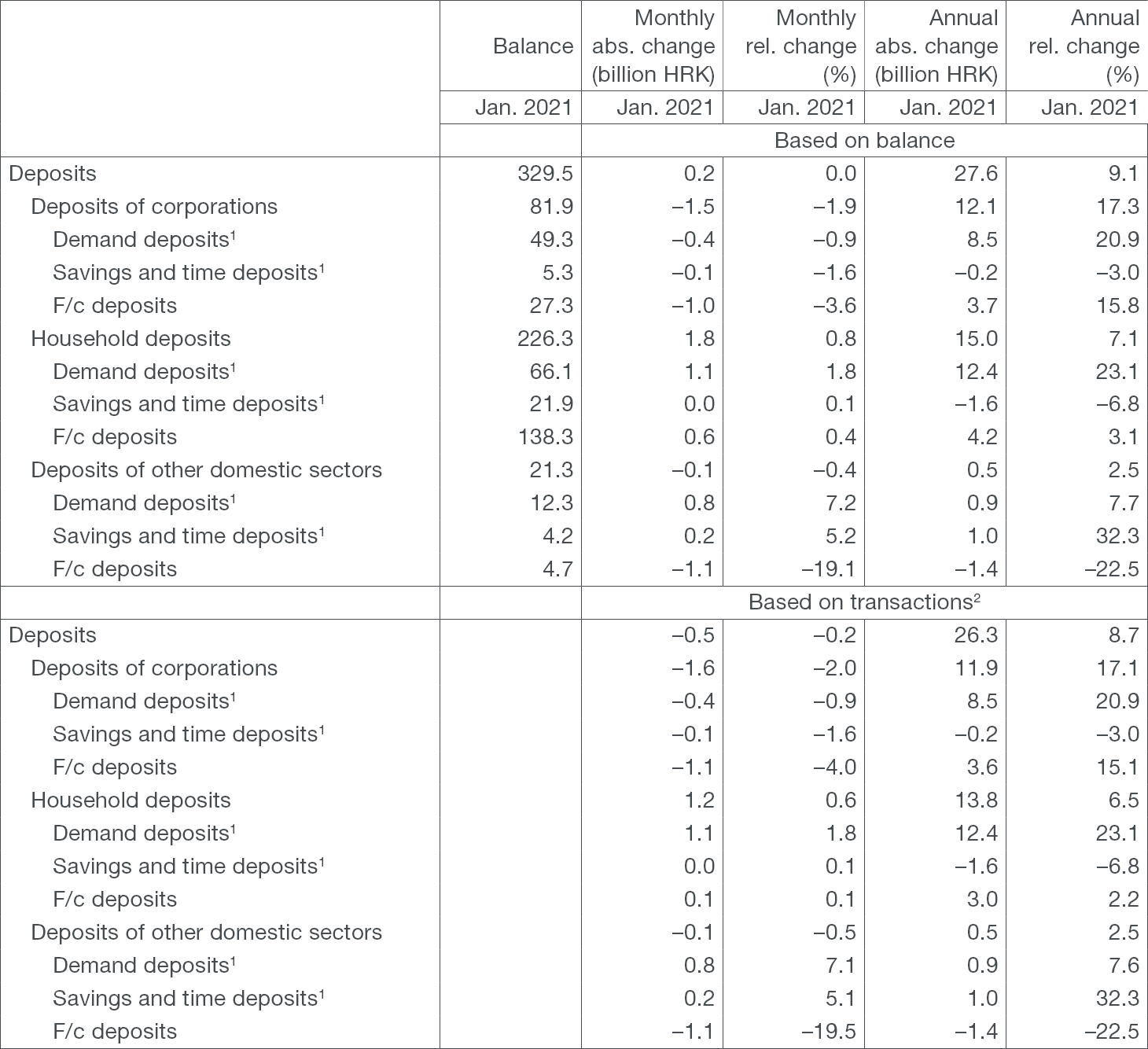 For detailed information on monetary statistics as at January 2021 see: