Comments on monetary developments for June 2022

Total liquid assets (M4) and money (M1) increased strongly in June. After an almost continuous slowdown from October last year, the annual rates of their growth began to accelerate.

Total liquid assets (M4[1]) increased particularly strongly in June (by HRK 12.6bn or 3.1%, based on transactions) (Table 1). Money (M1[2]) also increased significantly in June (by HRK 5.9bn or 3.1%). The most notable increase was recorded in demand deposits of households and non-financial corporations. Quasi-money went up too, by HRK 6.7bn (3.1% transaction-based), considering that in addition to kuna deposits in transaction accounts, the foreign currency deposits of corporations and, to a lesser extent, of households grew strongly (Table 3). The assets side of the balance sheet saw a relatively strong increase in the total placements of monetary institutions to domestic sectors (except the central government). However, the inflow of EU funds received under the Recovery and Resilience Facility to the government’s foreign exchange account with the CNB reduced the net claims of monetary institutions on the central government, thus reducing the total net domestic assets (NDA) of monetary institutions as well. Since the inflow in foreign exchange significantly increased the CNB’s net foreign assets (NFA) and the NFA of credit institutions also grew, in addition to the sharp increase in total liquid assets, their structure changed in favour of NFA. As regards monetary aggregates, their growth picked up in annual terms, following an almost continuous slowdown from October last year. The annual growth in M4 thus accelerated from 8.0% in May to 9.9% in June (based on transactions), the second consecutive month in which growth accelerated, although it was still significantly lower than in the preceding years. The increase in M1 picked up too, from 11.6% to 13.0%, remaining elevated (Figure 1).

Total placements of monetary institutions to domestic sectors (except the central government) grew by HRK 1.8bn, or 0.7% (transaction-based) in June and the annual rate of their growth continued to accelerate, having increased from 7.4% in May to 7.9% in June (Figure 2). The monthly increase in placements resulted entirely from the increase in loans as the dominant component of placements. Loans to households grew the most (HRK 1.5bn), but the annual growth in loans to that sector accelerated only slightly, from 5.5% in May to 5.6% in June, due to the base effect, i.e. the strong, although somewhat less pronounced increase in household loans in June last year. Broken down by instruments, housing loans increased by HRK 1.2bn in June (Table 2) as a result of new loans granted under the government subsidy programme, so that the annual rate of growth in housing loans picked up from 9.3% to 9.5%. General-purpose cash loans increased moderately (HRK 0.2bn) and their annual rate of growth remained at the level recorded in May (3.6%). Following a sharp increase in the period from February to May, loans to corporations increased only slightly in June (HRK 0.4bn) and picked up in annual terms from 11.6% to 12.3% due to the base effect, i.e. on account of the decrease recorded in June 2021. 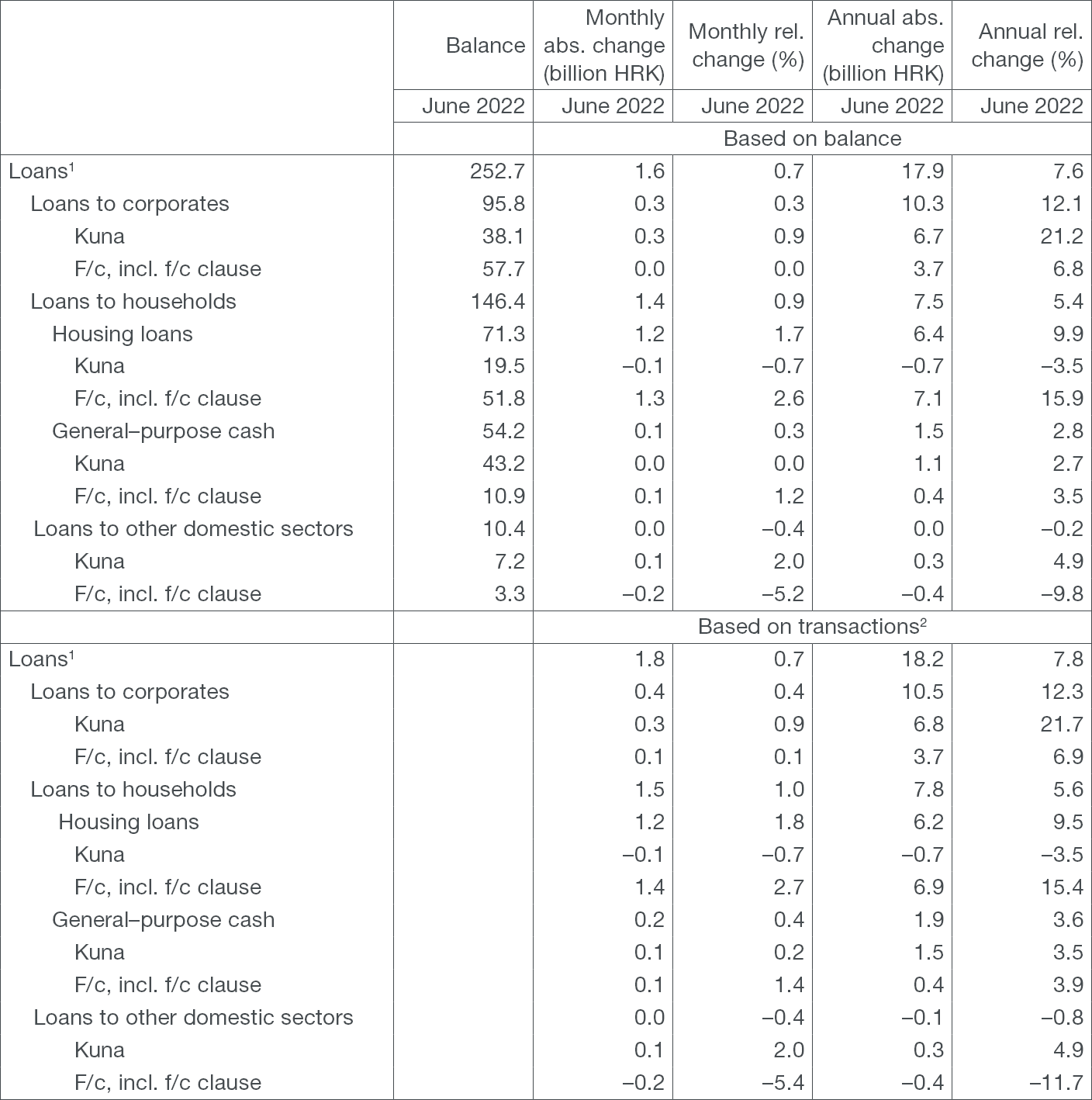 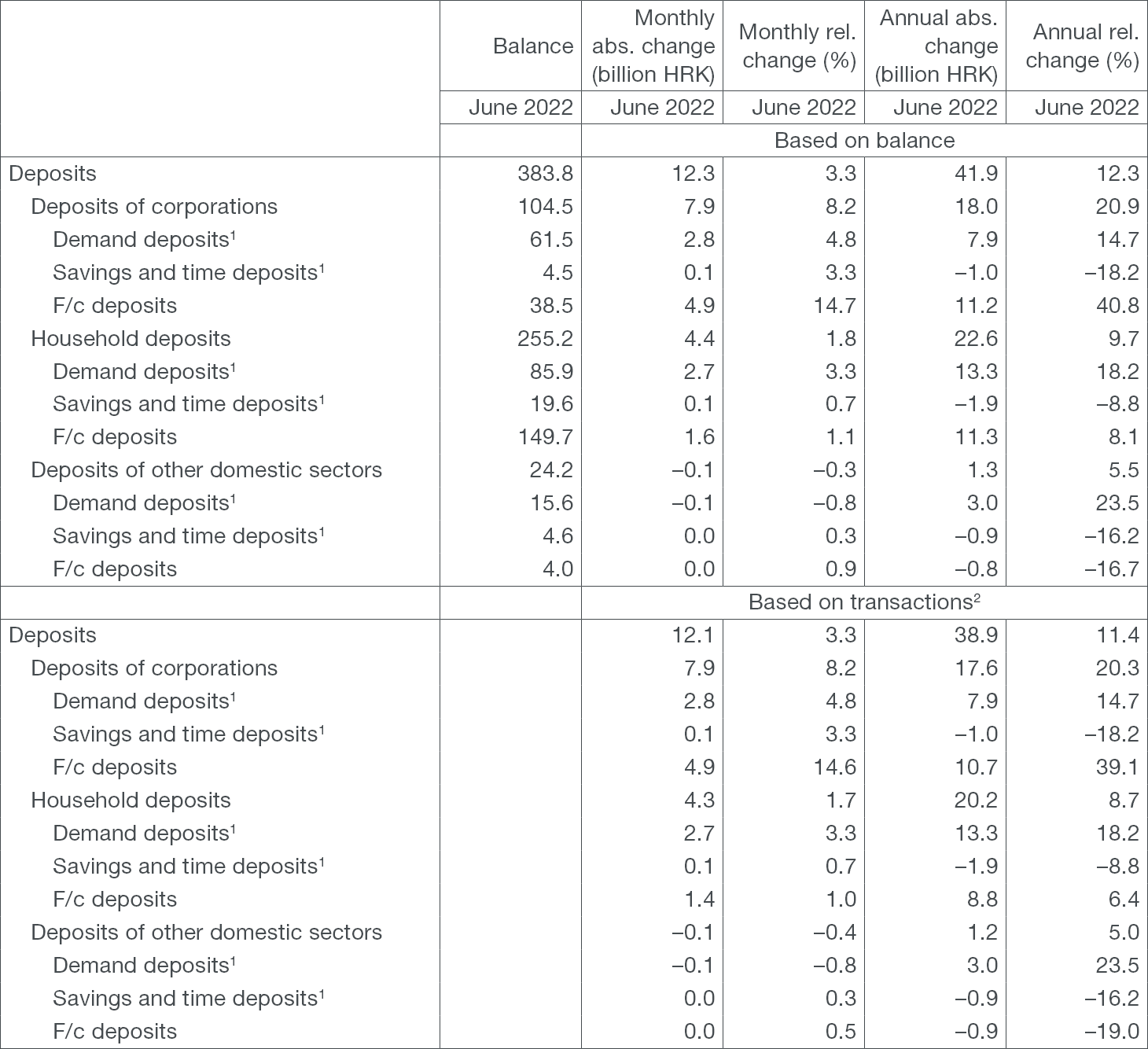 1Includes only kuna sources of funds of credit institutions.
2 The transactions show changes that exclude the effects of exchange rate changes, securities price adjustments, reclassification and write-off of placements, including the sale of placements in the amount of their value adjustment.
Source: CNB.

For detailed information on monetary statistics as at June 2022, see: