Comments on monetary developments for May 2022

Total liquid assets (M4) and money (M1) grew in May 2022. On an annual level, the growth in M4 accelerated slightly while the growth in M1 continued to decelerate.

Total placements of monetary institutions to non-financial corporations continued to grow sharply from the beginning of February, while the increase in the growth of placements to the household sector was mainly driven by a new round of government housing loan subsidies.

In May, total liquid assets (M4[1]) rose by HRK 5.9bn (1.5%, based on transactions) and stood at HRK 407.7bn at the end of the month (Table 1). The sharp growth of M4 in May took place amid a steep rise in net domestic assets of the monetary system (HRK 17.9bn), while net foreign assets shrank by a slightly smaller amount, both mainly as a result of outflows of government foreign currency deposits with the central bank due to the maturing of the eurobond. In addition to the mentioned fall in government deposits, the growth in net domestic assets also mirrored heavier lending to domestic sectors, particularly to corporates, driven by their increased demand for loans present for some time. Money (M1[2]) rose by HRK 3.0bn (1.6%) in May, mainly as a result of an increase in demand deposits. Quasi-money also rose (HRK 2.9bn or 1.4%), mostly reflecting the increase in corporate foreign currency deposits (Table 3). On an annual level, the growth in M4 accelerated to 8.0% in May, after slowing down steadily since October last year, while the growth in M1 continued to decelerate, reaching 11.6%, based on transactions, in May (Figure 1).

Total placements of monetary institutions to domestic sectors (except the central government) rose by HRK 3.7bn (1.4%, transaction-based) in May, with their annual growth rate accelerating from 6.5% in April to 7.4% in May (Figure 2). The monthly growth of placements is entirely related to loans as the predominating item in placements, with loans to non-financial corporations rising sharply for the fourth consecutive month (HRK 2.1bn) (Table 2). The annual growth in loans to that sector accelerated from 9.4% in April to 11.6% in May (transaction-based). Electricity and gaseous fuel distribution companies accounted for over one half of monthly transactions of loans to corporates in May, the remainder being accounted for by a diverse range of other corporates, mostly for investment and working capital financing. Household lending also strengthened, with housing loans accounting for the bulk of household loans, having risen by HRK 1.3bn (1.9%) in May. This is the biggest ever monthly increase in housing loans since December 2011 when data on housing loans transactions became available, and it mirrors the effect of new loans granted in the framework of this year’s round of the government subsidy programme. General-purpose cash loans also recorded an increase, having risen by HRK 0.2bn or 0.4%, similarly as in the previous several months. On an annual level, the growth in housing and general-purpose cash loans accelerated from 8.1% to 9.3% and from 3.4% to 3.6%, respectively. 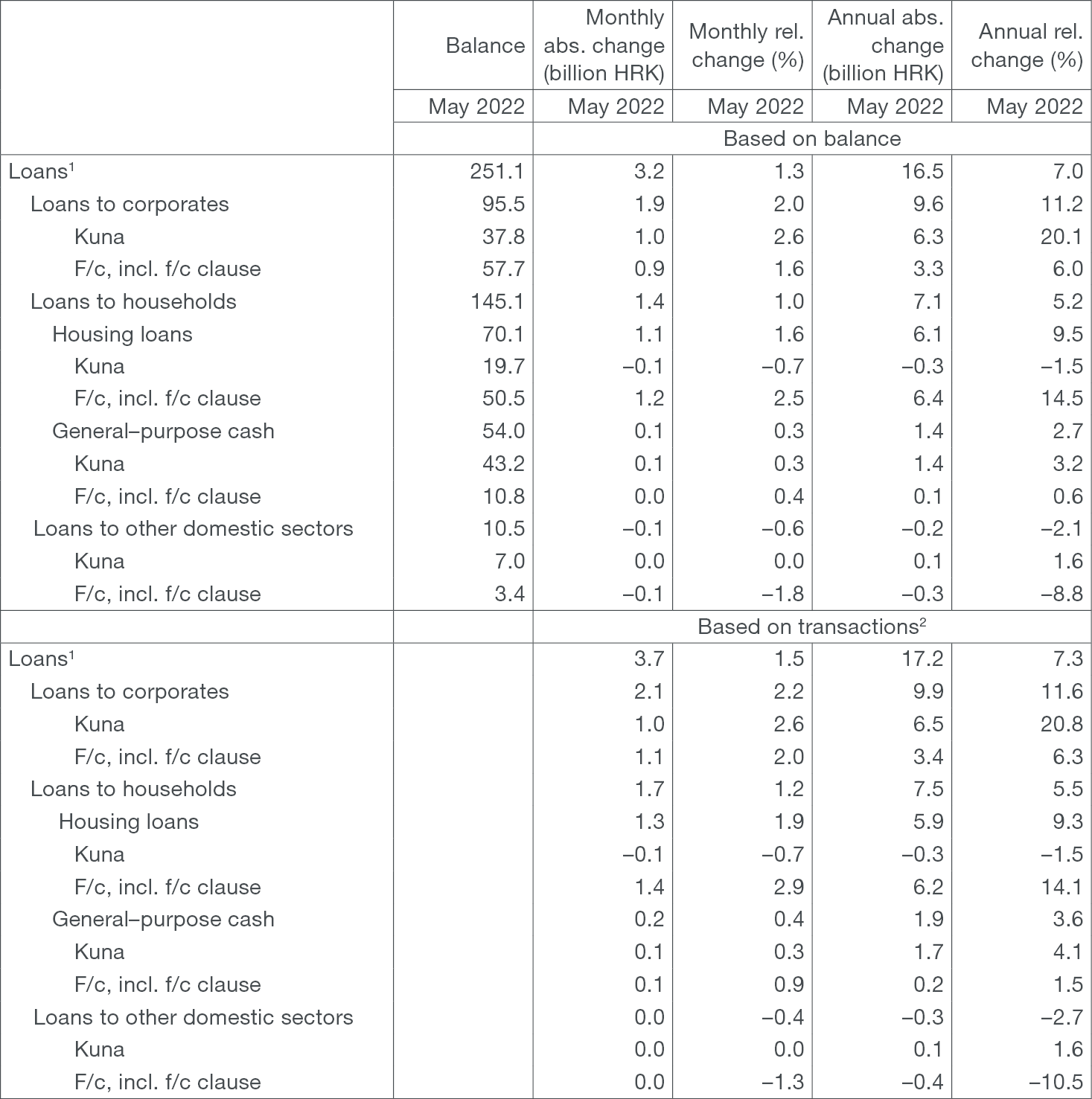 1 In addition to loans to households and non-financial corporations, they also include loans to the local government and other financial institutions.
2 The transactions show changes that exclude the effects of exchange rate changes, securities price adjustments, reclassification and write-off of placements, including the sale of loans in the amount of their value adjustment.
Source: CNB. 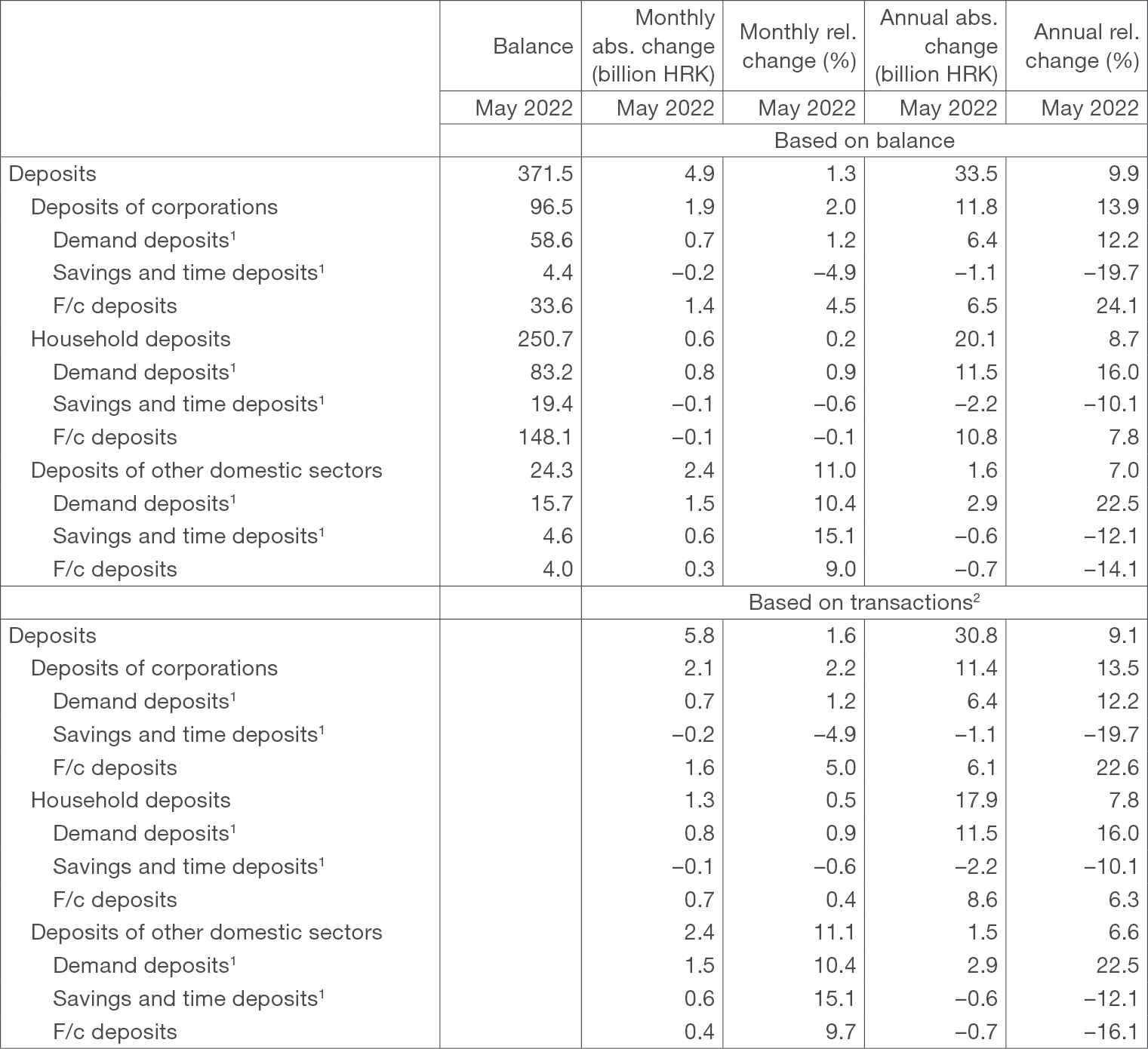 1 Includes only kuna sources of funds of credit institutions.
The transactions show changes that exclude the effects of exchange rate changes, securities price adjustments, reclassification and write-off of placements, including the sale of loans in the amount of their value adjustment.
Source: CNB.

For detailed information on monetary statistics as at May 2022, see: