Comments on monetary developments for November 2021

Total liquid assets (M4) increased in November mostly due to a decrease in central government deposits with the CNB. On an annual level, the growth of monetary aggregates M4 and M1 slowed down, owing to the effect of the base period, that is, their stronger growth in November of last year. Total placements of monetary institutions to domestic sectors (except the central government) also grew in November, reflecting the growth in both corporate and household lending.

Total liquid assets (M4[1]) rose by HRK 1.2bn or 0.3% in November (based on transactions) and stood at HRK 401.5bn at the end of the month (Table 1). The monthly increase in M4 was driven by the rise of net domestic assets (NDA), while net foreign assets (NFA) of the monetary system decreased at a slightly milder intensity. Despite this, the annual NDA growth continues to be subdued at the rate of 2.5%, after totalling 11.5% at the end of the previous year (based on stocks). The slowdown in NDA growth may predominantly be associated with weaker growth of net claims on the central government, with regular maturities even slightly reducing the balance of government securities repurchased last year. On the other side, NFA growth strongly accelerated this year, as a consequence of greater surplus in the balance of payments current and capital accounts, which resulted in higher M4 annual growth rates. Money (M1) increased by HRK 0.8bn or 0.4% in November. On an annual level, the annual growth rate of M4 decelerated slightly from 11.2% in October to 10.7% in November, and M1 decelerated from 20.6% to 18.8% due to the base effect, i.e. stronger growth in M4 and M1 in November of the previous year (based on transactions) (Figure 1).

Total placements of monetary institutions to domestic sectors (except the central government) grew by HRK 0.7bn or 0.3% (based on transactions) in November, with their annual growth rate holding steady at 4.5%, the rate attained in the previous month (Figure 2). In total placements, which stood at HRK 243.4bn in November, loans accounted for the greatest share (HRK 237.6bn). Broken down by sectors, corporate loans (HRK 0.4bn or 0.5%), as well as household loans (HRK 0.2bn or 0.2%) increased, with a mild rise being also recorded at other financial institutions (HRK 0.1bn or 0.5%). The majority of the monthly growth in loans granted to households was related to housing loans (HRK 0.3bn or 0.4%), while non-purpose cash loans remained almost unchanged (Table 2). On an annual level, total loans to households slowed down from 4.9% in October to 4.8% in November, reflecting the slowdown in the growth of housing loans, from 11.3% to 10.5%, due to the prominent growth of subsidised loans realised in the same period of last year. The slowdown in lending to households on an annual level was partially mitigated by the stagnation of general-purpose cash loans that went down in the same month of the last year, which increased their annual growth rate, from 1.6% to 2.0%. On the other side, the growth of loans to corporates continued to accelerate on an annual level (from 1.8% to 2.2%), after having stagnated earlier in the year. 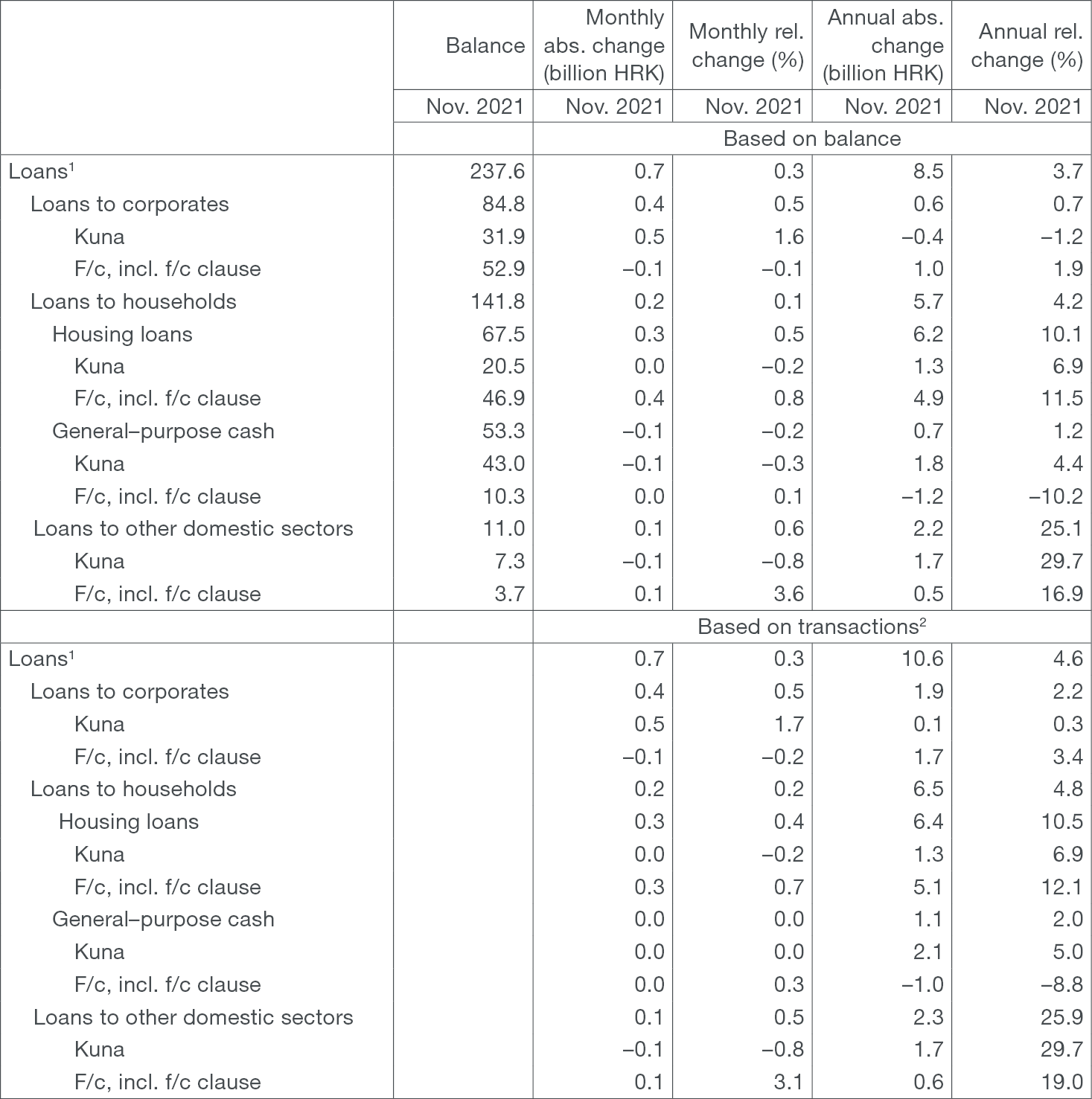 1In addition to loans to households and corporates, they also include loans to the local government and other financial institutions.
2The transactions show changes that exclude the effects of exchange rate changes, securities price adjustments, reclassification and write-off of placements, including the sale of loans in the amount of their value adjustment.
Source: CNB. 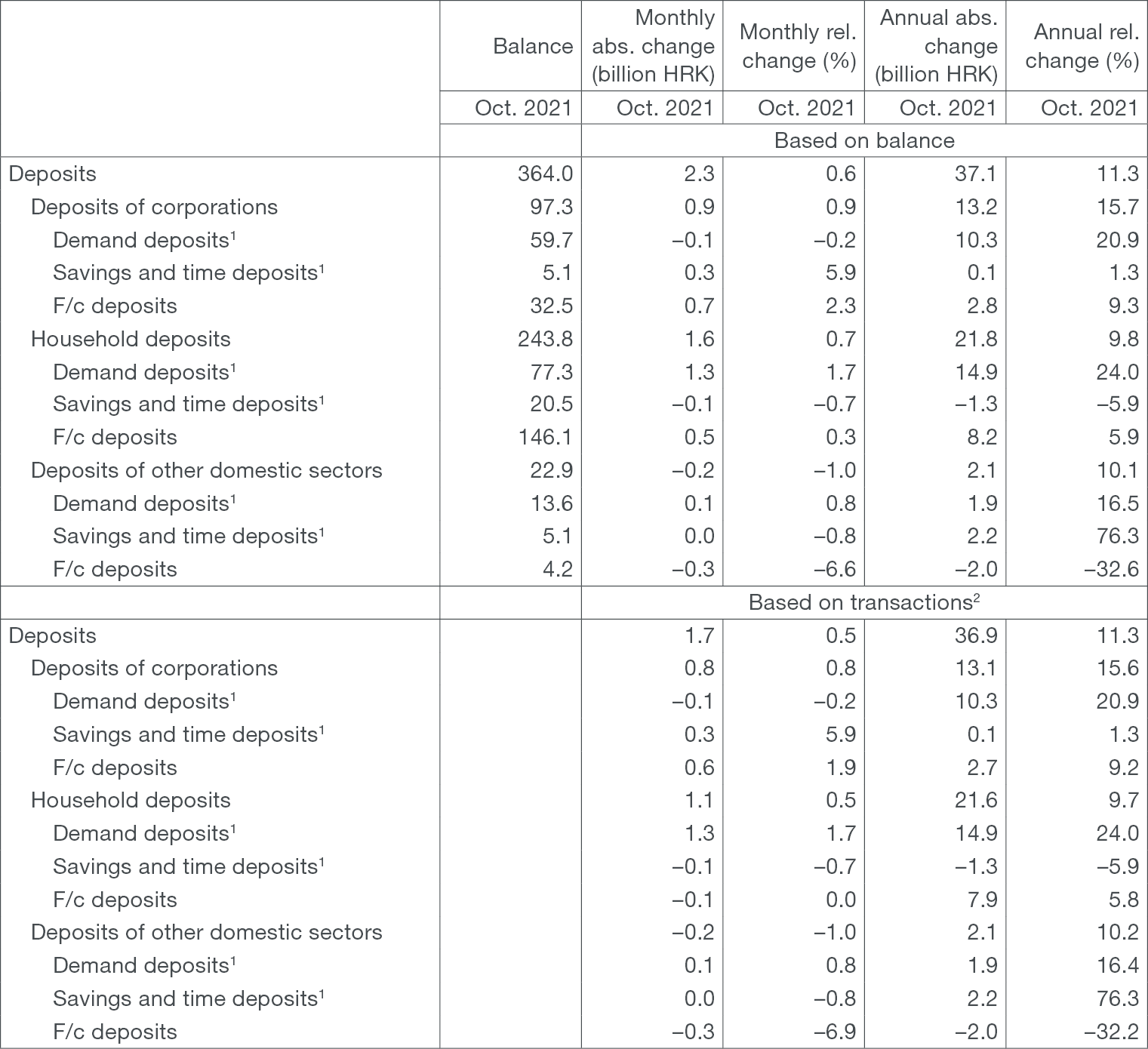 1Includes only kuna sources of funds of credit institutions.
2The transactions show changes that exclude the effects of exchange rate changes, securities price adjustments, reclassification and write-off of placements, including the sale of loans in the amount of their value adjustment.
Source: CNB.

For detailed information on monetary statistics as at November 2021, see: