Foreign trade in goods recorded a drop in exports in the first quarter of 2018 (2.0% on an annual basis), while imports continued to grow (6%), although at a slower pace than in the previous year. The unfavourable export performance can partly be attributed to the base effect related to the very strong export growth (19.9%) in the first three months of the previous year. Due to these trends, the goods account deficit widened by a significant EUR 0.3bn from the same period in the previous year. The balance of foreign trade in services also deteriorated (by EUR 0.1bn) as a result of a drop in net revenues from travel services and other services. The negative contribution of travel services was due to a sharp increase in residents' tourist spending abroad (40.9%), while tourism revenues grew 13.7% annually. As regards other services, trade balances deteriorated in personal services, cultural and recreational services, repair services and research and development services.

The negative balance in the primary income account remained almost unchanged from the first quarter of 2017. Net expenditures on direct equity investment grew, primarily due to an increase in banks' retained earnings and somewhat weaker business results of resident-owned foreign enterprises. In contrast, the primary income account balance was positively influenced by lower interest expenses on the external debt of domestic sectors and an increase in revenues from the compensation of residents temporarily employed abroad.

The overall secondary income and capital account balance held steady in the first three months of 2018. Total revenues from transactions with the EU budget increased mildly due to an increase in funds allocated for current expenditures, while the amount of capital funds distributed to end users remained almost unchanged from the same period in the previous year.

1The sum of the last four quarters.

The financial account recorded a net capital inflow of EUR 1.2bn in the first quarter of 2018, an increase of EUR 0.2bn from the same period in the previous year. Broken down by account, the bulk of the net inflow came from other investment as well as, to a considerably lower degree, from foreign direct investment. The portfolio investment balance did not change significantly. In contrast, the strong net capital inflow was offset by an increase in international reserves brought about by central bank's foreign exchange interventions.

The strong net capital inflow in the other investment account (EUR 1.6bn) in the first quarter of 2018 was primarily due to a decline in banks' foreign assets within TARGET2 (EUR 0.8bn) and a rise in central bank's liabilities caused by an investment of reserve assets in repo agreements (EUR 0.3bn).[1]

Net inflow from foreign direct investment stood at EUR 0.3bn, up by EUR 0.1bn from the same period in the previous year. The increase primarily resulted from a growth in the retained earnings of foreign-owned domestic enterprises, especially banks. Equity investments in the Republic of Croatia had a negative value due to a decrease in the share capital of a manufacturing enterprise, financed by borrowing from an affiliated enterprise. 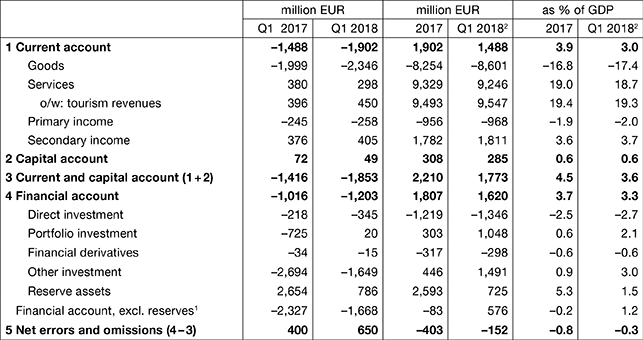 The described increase in net liabilities in the financial account resulted in a deterioration of the relative indicator of the international investment position, which was to some extent alleviated by favourable cross-currency changes and other adjustments. The net international investment position of the Republic of Croatia thus deteriorated by EUR 0.8bn, standing at EUR –31.2bn (–63.0% of GDP) at the end of March 2018 (Figure 2). 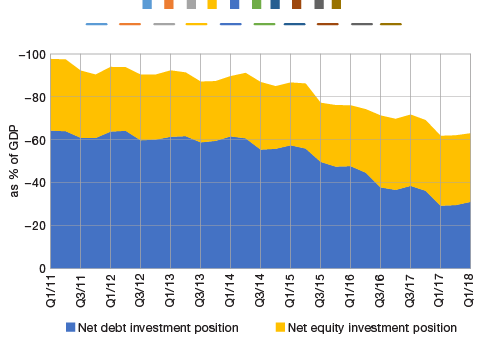 Data on the balance of payments and the international investment position are revised in accordance with the commonly used practice based on subsequently available data.