The current and capital account showed a surplus of EUR 0.2bn in the second quarter of 2017, which was slightly less than in the same period of the previous year. The deficit on the goods account widened by EUR 0.2bn, net exports of services grew by almost the same amount, while the primary income balance and the overall secondary income and capital account balance deteriorated slightly. The four-quarter cumulative current and capital account surplus stood at 3.6% of GDP at the end of the second quarter of 2017, remaining on a slight downward trend, particularly owing to the wider deficit on the goods account.

The widening of the goods trade deficit in the second quarter was due to faster growth in goods imports than exports (8.6% vs 7.3% on an annual basis), while the higher surplus in the trade of services was the result of the exports growth exceeding imports growth (8.2% vs 1.6% on an annual basis). The improvement in the tourism balance was recorded together with very high growth rates of both revenues and expenditures (13.4% and 25.1%, respectively, on an annual basis), and was boosted also by the later Easter holidays, while the net income from other services remained almost the same.

The primary income balance deteriorated slightly from the second quarter of 2016 under the influence of larger non-residents' income from direct investment in Croatia. Profit of domestic business entities owned by non-residents grew in most activities, with the exception of banking, where it dropped due to bank provisions for loans related to the Agrokor group. As a sizeable share of previous year's profit was paid out in dividends, which is usual in the second quarter, retained earnings were very modest, and even significantly negative in the banking sector. The negative balance of income from portfolio and other investments continued to decline as a result of lower interest expenditures on external debt. The overall secondary income and capital account balance deteriorated slightly due to larger payments to the EU budgets as well as weaker absorption of EU funds. More precisely, although the amount received from EU funds was larger than in the second quarter of 2016, slightly less funds were distributed to end users[1].

The financial account of the balance of payments saw a net outflow of capital (decrease in net foreign liabilities) of EUR 0.4bn in the second quarter of 2017, largely owing to the net deleveraging of domestic sectors abroad. Broken down by account, the strong decrease in net liabilities was recorded in the accounts of other and portfolio investments, which was financed by a reduction in international reserves.

A decrease in net liabilities in the other investment account[2] (EUR 1.4bn) was mostly associated with a reduction in CNB foreign liabilities based on reverse repo transactions with foreign banks. The remaining part of capital outflows from the other investment account was related to the decrease in net liabilities of credit institutions (EUR 0.4bn EUR), accompanied by the ongoing mild corporate deleveraging.

The portfolio investment account also saw sizeable capital outflows (EUR 1.3bn) as the central government repaid USD 1.5bn worth of five-year dollar bonds in April[3]. As the bonds were hedged against the exchange-rate risk, the actual repayment value was lower than that shown in the portfolio investment account (where transactions are valued at the current exchange rate) by the amount registered in the financial derivatives account (EUR 0.3bn). The government repaid the bonds by using the funds deposited with the central bank, which led to a reduction in international reserves. The strong fall in international reserves in the second quarter (EUR 1.9bn) was entirely due to the reduction in government deposits with the CNB and the mentioned repo transactions[4]. At the same time, the foreign currency purchased from credit institutions in the course of central bank interventions alleviated the drop in reserves.

Net capital inflows of EUR 0.1bn generated from foreign direct investment in the second quarter of 2017 mostly related to borrowings of domestic enterprises from affiliated enterprises abroad. There were almost no retained earnings and direct equity investments. As regards retained earnings, their reduction was largely the outcome of lower profit in the banking sector, accompanied by a parallel increase in dividend payments. Direct equity investments were even negative due to the takeover of a formerly foreign-owned enterprise by a resident. Nevertheless, new investments were seen, though modest, mostly in the real estate and trade sectors. 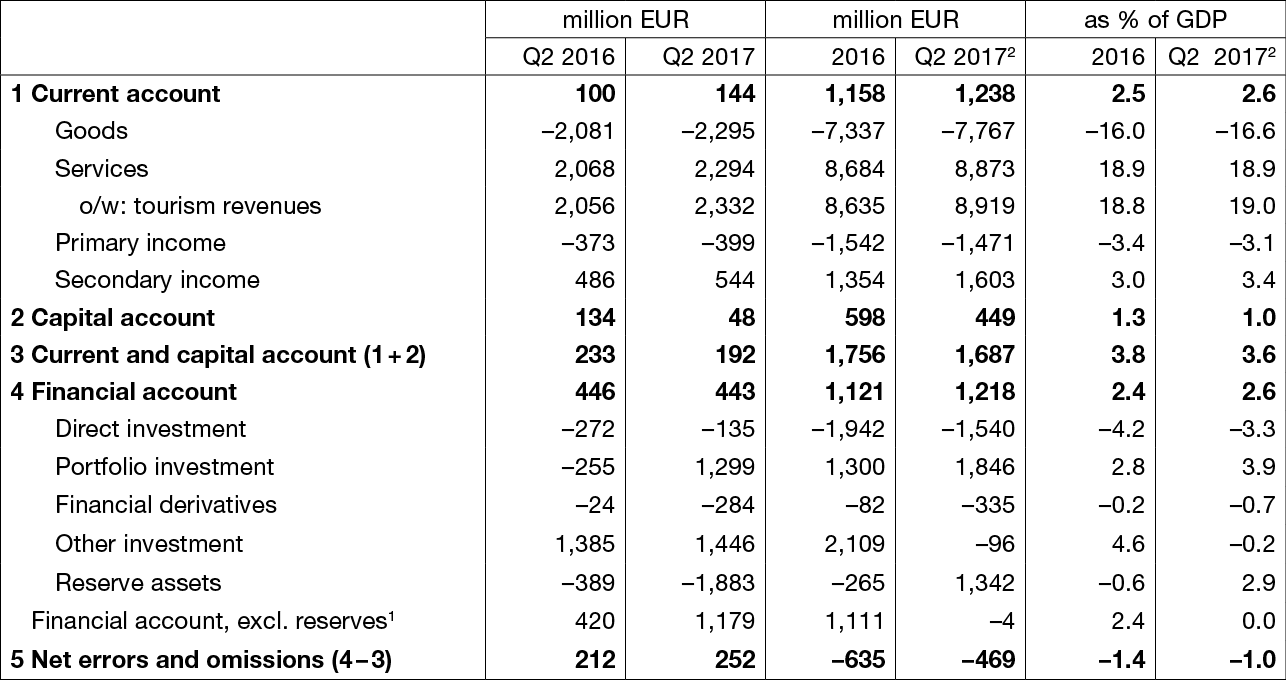 As a result of the developments in the financial account, the net international investment positon of the Republic of Croatia improved mildly in the second quarter of 2017 thanks to improvements seen in the net debt positon of domestic sectors, while based on equity investments, a mild upward trend in net foreign liabilities continued. The net international investment positon stood at EUR –33.3bn, while the relative indicator improved to –71.0% of GDP (Figure 2) at the end of the second quarter of 2017. 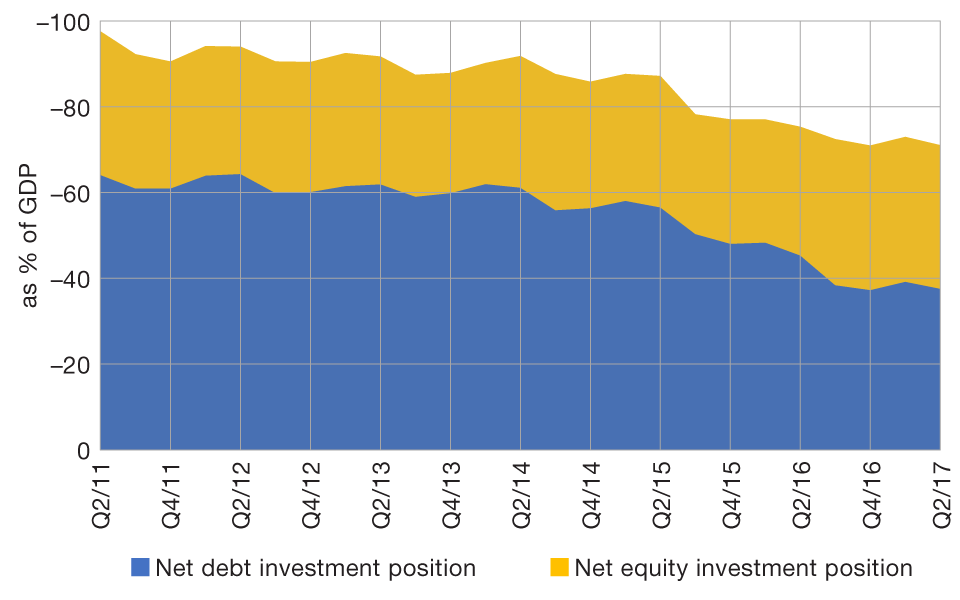 Data on the balance of payments and the international investment position are revised in accordance with the commonly used practice, based on data obtained after the last quarterly dissemination.