Comments on the balance of payments, gross external debt and the international investment position in 4Q 2021

The current and capital account of the balance of payments ran a deficit of EUR 31m in 4Q 2021, with the result that the balance deteriorated by EUR 144m from the same period in the previous year. However, the current and capital account recorded a surplus of 5.8% of GDP on the 2021 level, increasing by 3.7 percentage points from 2020, primarily due to a strong recovery of income from tourist spending of foreign guests.

Gross external debt stood at 77.8% of GDP at end-2021, down by 2.0 percentage points from end-September, the decrease being entirely due to nominal GDP growth. The relative indicator of the net international investment position also improved, rising from –36.3% of GDP at end-3Q to –33.9% of GDP at end-4Q 2021.

The current and capital account of the balance of payments ran a deficit of EUR 31m in 4Q 2021 so that the balance deteriorated by EUR 144m from the same period in the previous year (Figure 1a). This primarily resulted from a drop of EUR 0.5bn in the primary income account surplus, caused by the growing profits of banks and enterprises owned by non-residents (primarily in real estate activities). The foreign trade deficit also widened, while the surplus in the secondary income and capital transaction account edged down slightly. However, such developments were mitigated by a steep rise in net exports of services, in particular travel services (Table 1).

Foreign trade picked up sharply in 4Q 2021, with faster annual growth in exports than in imports (42.3% and 31.1%, respectively). Nevertheless, due to a markedly higher imports base, the foreign trade deficit widened by EUR 0.3bn from the same period in the previous year. Goods exports and imports grew at very high rates, reflecting the growth of both foreign and domestic demand as well as an increase in the prices of goods, especially energy products and other raw materials, in the global market. Net exports of services increased sharply by EUR 0.6bn, mainly due to tourist spending of foreign guests. Net exports of other services, especially construction services, increased much less.

The financial account of the balance of payments recorded a net capital inflow of EUR 0.3bn in 4Q 2021, in contrast with the same period in the previous year, when net financial liabilities stagnated (Figure 1b). Broken down by individual accounts, this year’s largest net capital inflow was the outcome of foreign direct investments, and, to a much lesser extent, of other investments. The increase in foreign assets in the portfolio investment account was coupled with an equal increase in foreign liabilities. Gross international reserves grew strongly.

The net inflow of foreign direct investments amounted to a substantial EUR 0.8bn in 4Q 2021, in contrast with a slight outflow in the previous year. The growth of net foreign direct investments was primarily due to retained earnings on the liabilities side, resulting from improved business results of banks and enterprises in foreign ownership. In addition, debt liabilities of domestic non-financial corporations to affiliated foreign creditors increased, while debt claims of domestic sectors decreased. New direct equity investments remained at almost the same level as in the last quarter of the previous year and were mainly realised in the real estate sector.

The other investment account recorded a slight capital inflow (EUR 0.1bn) in 4Q 2021, because the sharp fall in net foreign assets of banks, following their strong growth in the main tourist season, was to a large extent offset by the improvement of other sectors’ net positions. Government debt claims increased markedly as the amount of funds distributed to end-users exceeded the amount received from the EU budget. The increase was also accounted for by the advance payment for the purchase of fighter planes. An increase was also recorded in banks’ assets within the TARGET2 system[1] operated by the central bank. In addition, other domestic sectors’ foreign assets increased and their foreign liabilities decreased. However, central bank liabilities stemming from the growth in the volume of repo transactions grew[2].

Due to the growth in the volume of repo transactions, gross international reserves increased by the same amount, with their increase additionally spurred by transactions between the CNB and the government. As a result, gross international reserves went up significantly in 4Q 2021 (by EUR 0.6bn), standing at EUR 25.0bn at end-2021, which is 2.7% more than at end-September and even 32.1% more than at the end of the previous year. 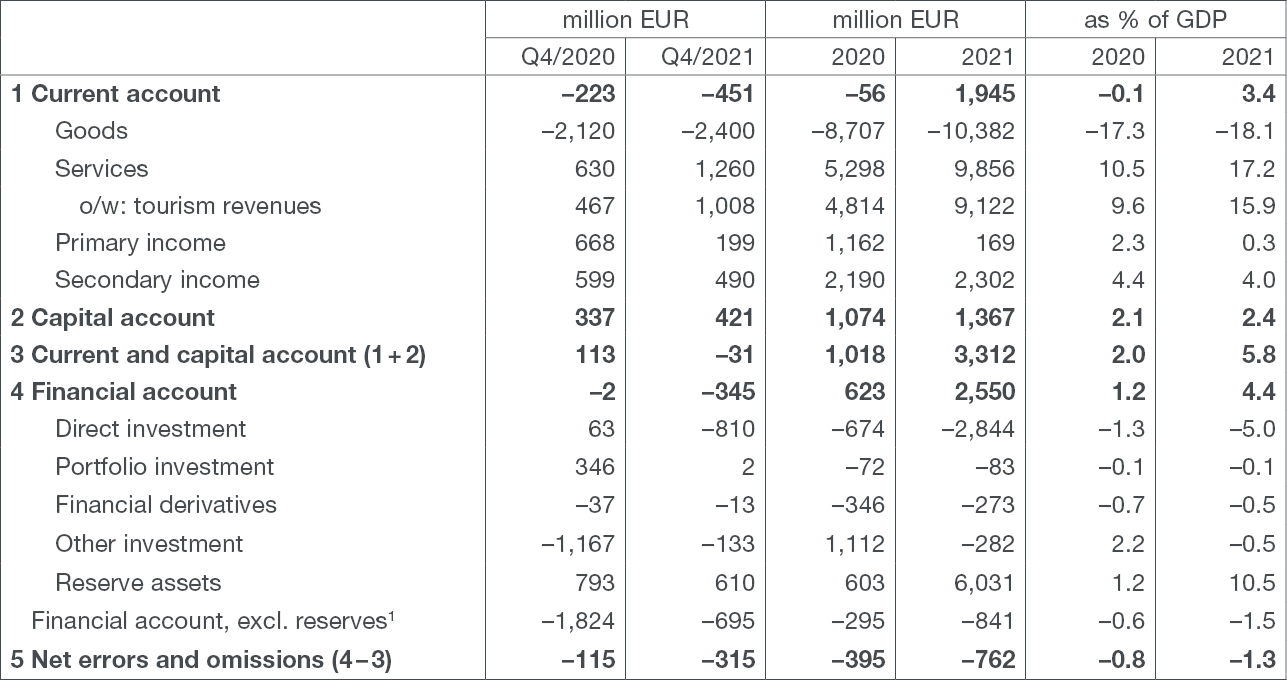 1 Excluding the change in the gross international reserves and foreign liabilities of the CNB. The investment of a portion of international reserves in reverse repo agreements results in a simultaneous change in CNB assets (recorded in the reserve assets account) and liabilities (recorded in the other investment account) and thus has a neutral impact both on changes in the central bank’s net foreign position and the overall financial account balance.
Note: The positive value of financial transactions denotes net capital outflow abroad and the negative value denotes net capital inflow.
Source: CNB.

On the 2021 level, the current and capital account surplus was 5.8% of GDP, as against 2.0% of GDP in 2020. The sharp increase in the surplus was driven by the strong growth of net exports of services, especially of revenues from tourism, which reached 87% of the 2019 level. The surplus in the secondary income and capital transaction accounts also rose, albeit to a much lesser extent, as a result of the growth of net revenues from transactions with the EU budget and personal transfers. The deepening of the foreign trade deficit had an opposite effect, while the increase in the profits of foreign-owned banks and enterprises led to a deterioration in the primary income account balance. As a result, the financial account of the balance of payments saw a considerably higher net capital outflow than in the previous year, which reflects a sharp increase in international reserves.

The gross external debt stock stood at EUR 44.6bn at end-2021, which is an increase of EUR 0.3bn from end-September (Figure 2a). This resulted from the central bank’s debt rising by EUR 0.3bn due to the increased volume of repo transactions and the growth of bank debt (EUR 0.2bn). In contrast, the external debt of other domestic sectors declined, including liabilities to affiliated creditors, down by EUR 0.2bn. Although debt grew in absolute terms, a sharp increase in GDP in 4Q led to the improvement of the relative indicator of gross external debt, which stood at 77.8% of GDP at end-2021 and was 2.0 percentage points lower than at end-September and end-2020 (Figure 2b).

Note: Changes in gross external debt are a result of net transactions of domestic sectors and exchange rate and other adjustments.
Source: CNB.

Net external debt declined slightly by EUR 0.1bn in 4Q 2021 because the growth of bank debt was more than offset by a decrease in the debt of other sectors (primarily that of the central bank, followed by those of the government and other domestic sectors). Net external debt thus stood at EUR 2.3bn at end-December (4.0% of GDP), which is a decrease of 0.3 percentage points from end-September 2021 and of 10.8 percentage points from end-2020.

The net international investment position improved from EUR –20.2bn at end-September to EUR –19.4bn at end-December 2021. In addition to a slight drop in net debt, the improvement was even more due to a decrease in net equity liabilities resulting from favourable price adjustments and other adjustments. Broken down by individual sectors (Figure 3a), the net foreign position of the central bank improved the most, while those of other domestic sectors and the government also improved, but to a lesser degree. The net foreign position of credit institutions deteriorated. The relative indicator of the net international investment position improved to –33.9% of GDP at end-December 2021, from –36.3% of GDP at end-September, and –47.7% of GDP at end-2020 (Figure 3b).

Data on the balance of payments, gross external debt and the international investment position are revised in accordance with the commonly used practice, based on subsequently available data.