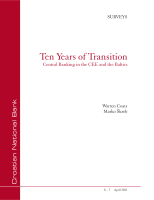 The aim of the paper is to analyze the significant changes Central and Eastern European central banks have undergone in the first decade of transition. In only a couple of years, they have been completely transformed from a socialist monobanking system to modern, independent central banks with the same functions as any central bank in a developed economy. Today, on average, de iure independence is very high and probably higher than the de facto one. Almost all central banks have price stability as their main mandate. Inflation was reduced significantly in the first couple of years. Monetary policy underwent crucial changes as countries switched from direct to indirect instruments of monetary policy (some with fixed exchange rate regimes e.g., currency boards, and some with flexible). The environment for monetary policy (banking, money market, payment system) has changed as well, but in some countries much remains to be done in these areas. The future of central banks in transition depends very much on the relations of countries with the European Union. But, even when (and, for some, if) transition central banks cede their monetary functions to the European Central Bank, they will have a very important role to play, such as research and information dissemination, education on sound economic policy, systemic financial stability and, for most of them, supervision of the banking system.