Does Croatia have sufficient international reserves? 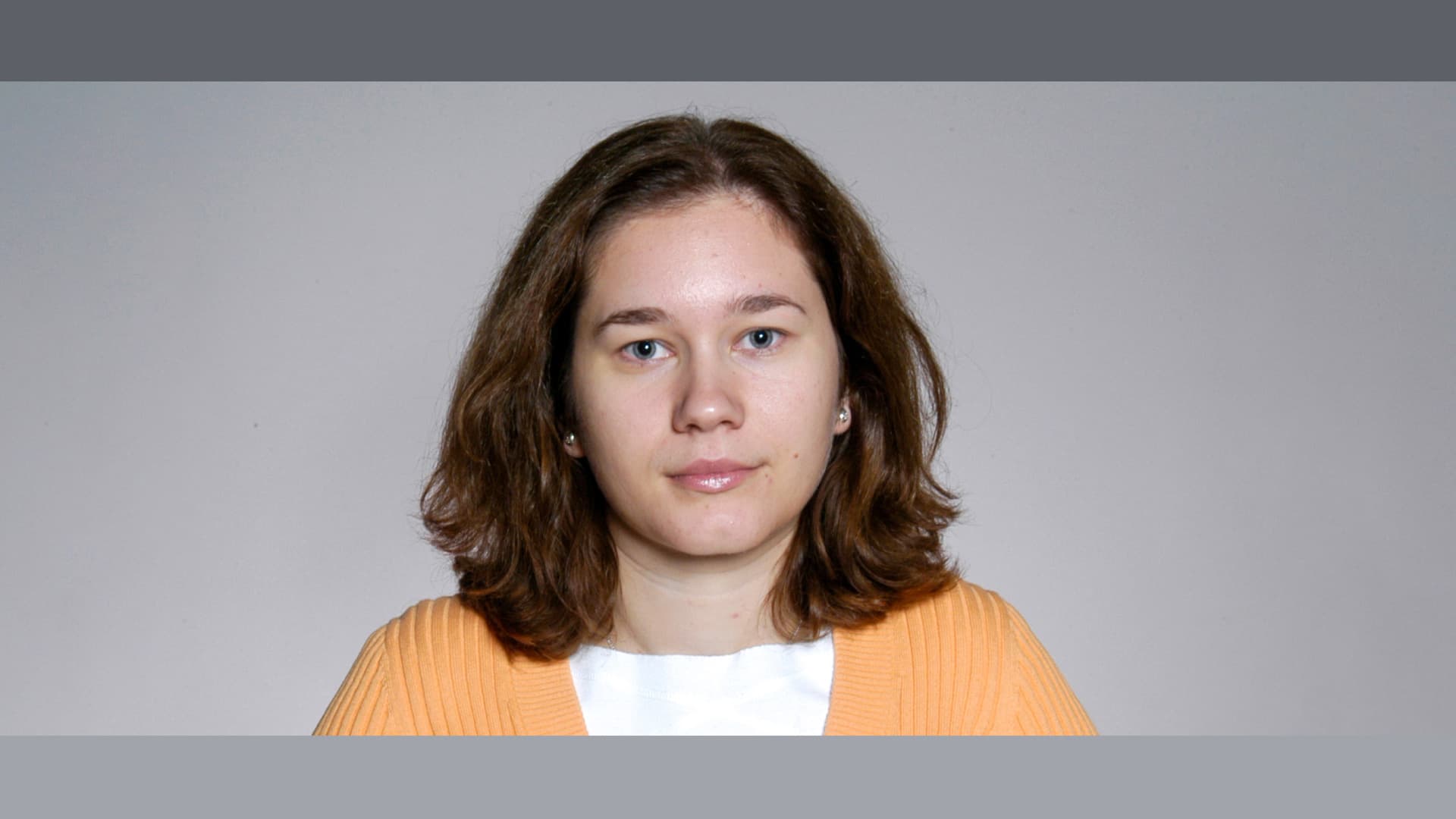 Gorana Lukinić Čardić
Head of the External Sector Analysis Division, Economic Analysis Department, Research Area, CNB
The coronavirus pandemic has put strong depreciation pressures on the kuna, which prompted the Croatian National Bank to intervene in the foreign exchange market. Because of the foreign exchange sale, international reserves decreased noticeably within just a month and a half, which gave rise to concerns regarding their sufficiency. Notwithstanding the intensity of the decrease, all indicators of their adequacy show that Croatia has accumulated sufficient reserves for the continued maintenance of a stable exchange rate of the domestic currency.

The Croatian National Bank (CNB) accumulated abundant international reserves in the period preceding the coronavirus pandemic[1]. At end-2019, gross international reserves of the Republic of Croatia stood at EUR 18.6bn, while net reserves[2] – which do not include foreign currency funds received by the CNB based on the obligations assumed, and which are therefore a better indicator of the reserves at free disposal of the central bank – were EUR 17.4bn, up by 6.4% and 9.8% respectively from the end of the previous year. This continued the years-long upward trend in reserves (Figure 1). However, as the coronavirus pandemic and increased uncertainty regarding its economic impact created intense depreciation pressures on the kuna, the CNB intervened by selling foreign exchange in the market after almost four and a half years. In the five interventions conducted from 9 to 31 March, the CNB sold to banks EUR 2.2bn, while additional EUR 0.3bn was sold outside auctions from mid-March to mid-April, reducing international reserves by a total of EUR 2.5bn. Gross international reserves stood at EUR 15.7bn in mid-April 2020, down by EUR 2.9bn or 15.5% from the end of 2019. A somewhat larger decrease in gross reserves than the mentioned sale of foreign exchange was mostly a result of a lower level of agreed repo transactions.[3] Net reserves stood at EUR 15.1bn in mid-April, falling by EUR 2.2bn or 12.8% from the end of 2019. Net reserves were thus at almost the same level in mid-April 2020 as in the second half of 2018. 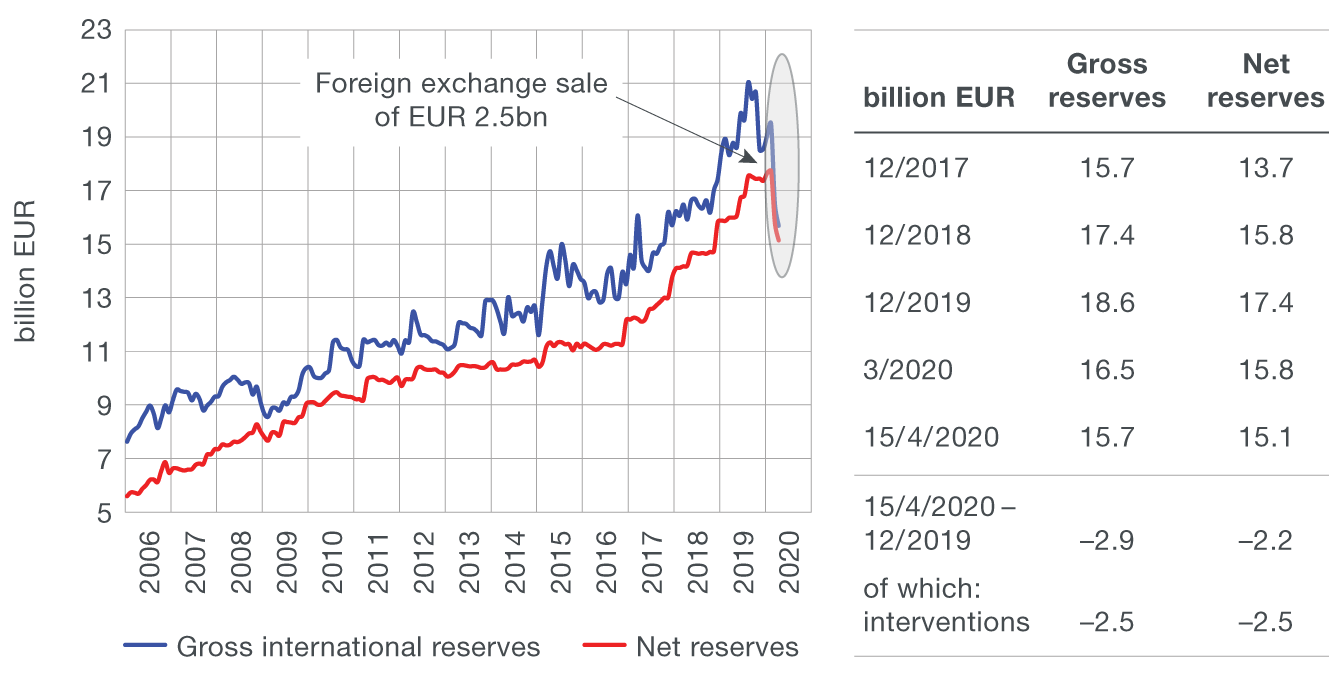 In view of the noticeable decrease, it should be considered whether the current level of international reserves is adequate. To begin with, let us remember the purpose of reserves. Central banks accumulate international reserves to ensure foreign currency liquidity and mitigate the negative consequences of BOP shocks triggered by sudden stops in foreign capital inflows or turbulence in export markets. International reserves may also be used to ensure foreign currency liquidity in conditions of substantial withdrawals of foreign currency deposits from the banking system, for example, during a banking crisis. Furthermore, an adequate level of international reserves indicates that a country is less vulnerable to external shocks, so it facilitates access to foreign capital markets and reduces foreign borrowing costs. From the perspective of Croatia, particular account should be taken of the fact that the CNB’s monetary policy is focused on the maintenance of stability of the exchange rate of the kuna against the euro, which also helps in maintaining the stability of prices and the financial system. Therefore, in conditions of excessive exchange rate fluctuations, the central bank intervenes in the foreign exchange market, as was the case this March and April. On the other hand, the maintenance and accumulation of international reserves are associated with certain costs and risks, among others, the opportunity cost arising from holding foreign assets that produce lower yields than domestic assets, sterilisation costs, and a risk of mounting inflationary pressures in the absence of sterilisation.

Various indicators are used to assess the sufficiency of a country’s international reserves, for example, reserves are put into ratio with imports (of goods and services), short-term debt (at remaining maturity) and monetary aggregates. In addition, there is the IMF’s Reserves Adequacy Metric (RAM), which combines several factors (exports of goods and services, short-term debt, medium- and long-term liabilities under portfolio and other investments and liquid domestic assets measured by a broad monetary aggregate).[4] It should be noted that, while there is no consensus on the sufficient level of reserves, the common opinion is that reserves should cover at least three months of imports, 100% of short-term debt and 20% of broad money, and be in the 100-150% range of the IMF’s metric.

All adequacy indicators of Croatia’s gross international reserves suggest that they are sufficient. At the end of 2019, reserves were sufficient to cover 7.9 months of goods and services imports in the preceding year and more than 40% of total liquid assets (M4). Also, reserves covered more than 100% of debt falling due within one year and were within the recommended range of the IMF’s metric (Figure 2). Two other factors should also be taken into account when assessing reserve adequacy. In addition to official international reserve of the CNB, there is also a portion of the foreign currency assets that banks are required to maintain in liquid forms in accordance with the central bank regulations on the minimum required amount of foreign currency claims (MRFCC). As the central bank may release that part of banks’ foreign currency assets when it deems it necessary, it may be seen as additional foreign currency liquidity buffer for the whole monetary system. Furthermore, total short-term debt includes debt of enterprises to affiliated creditors. As such debt relations are characterised by a permanent ownership interest, related capital flows are usually more stable and less sensitive to changes in market sentiment. Indicators of reserve adequacy are even more favourable when these additional factors are taken into account (including the portion of banks’ foreign currency assets controlled by the CNB into total reserves and excluding short-term liabilities to affiliated creditors). Finally, it should be noted that, in terms of foreign currency liquidity provision, the CNB has at disposal EUR 2bn from a swap line agreed with the European Central Bank.

​​​​​Note: GIR stands for gross international reserves, MRFCC for a part of banks’ foreign currency assets stipulated by the regulations on the minimum required amount of foreign currency claims, FDI is debt to affiliated creditors, and RAM is the IMF’s metric of reserve adequacy assessed based on the weights for fixed exchange rate systems.
Source: CNB.

The sufficiency of reserves is also confirmed by an international comparison of gross international reserves in Croatia and other Central and Eastern European Countries that have not yet adopted the euro, showing that Croatia does not lag behind its peers in terms of relative reserve levels, but is among the countries with relatively high reserve levels (Figure 3). The Czech Republic and Bulgaria have larger reserves than Croatia (as % of GDP), while Poland, Hungary and Romania have lower reserves. This holds even after accounting for the reduction in Croatia’s reserves in the first three months of 2020. In line with this, the standard reserve adequacy indicators measured on the basis of the coverage of imports and the broadest monetary aggregate show that Croatia’s reserves are slightly larger than the average for the other countries under review. All this suggests that, despite the recent reduction, the sufficiency of Croatia’s reserves for the continued maintenance of a stable exchange rate of the domestic currency is not questionable thanks to ample accumulation in the period preceding the outbreak of the coronavirus pandemic.

Notes: BG stands for Bulgaria, HR for Croatia, CZ for the Czech Republic, HU for Hungary, PL for Poland and RO for Romania. The relative ratios of reserves to GDP and exports in March 2020 were calculated as the ratio of gross international reserves at end-March 2020 to nominal GDP and exports in 2019.
Sources: CNB, Eurostat, ECB and national central banks.