Financial literacy, a tool for survival in modern society 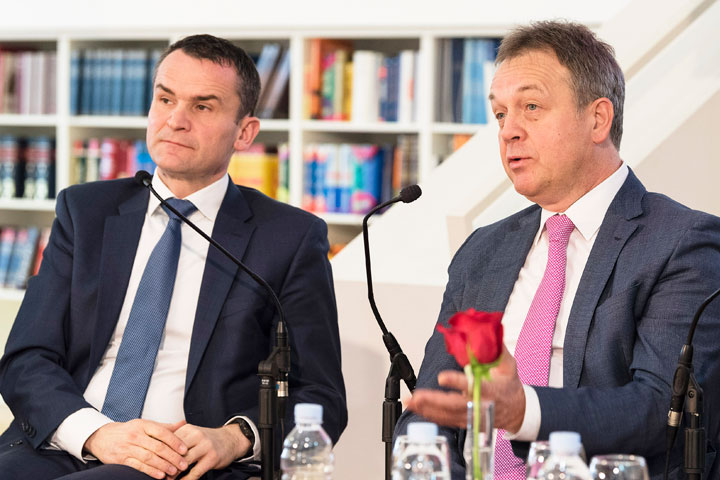 A growing interest for financial education provided by the central bank witnessed each year can be seen in an increasing number of secondary school pupils and university students who attend this type of education organised by the CNB. In comparison with 2679 pupils and students who attended CNB education in 2017, in 2016 the number of attendees stood at close to 2000 and in 2015 at 1200, said Vicegovernor Bojan Fras at the forum "Finance for Everyone" held on 14 February and organised by the Association of Croatian Pension Funds Management Companies and Pension Insurance Companies, the Faculty of Economics and Business Zagreb and Hanza Media. As Vicegovernor noted, the Croatian National Bank has a long history of financial education. For many years now, higher grade primary school pupils, secondary school pupils and university students have been attending CNB workshops and lectures on how to manage their personal finances, the role of the central bank and key notions of public finance. The central bank has stepped up its efforts to improve financial education of the youth after a financial literacy survey conducted in 2015 by Hanfa and the CNB on a national sample, has revealed that young persons up to the age of 19 and those aged 20 to 29 have a low level of financial knowledge of the institutions and processes present in the financial life of a country and its citizens and that their financial behaviour is inadequate.

As Vicegovernor Fras noted, educational programmes for secondary school pupils and university students will continue this year, and he announced the expansion of educational activities to areas outside Zagreb and visits of CNB experts to schools and universities throughout the country. In addition, the closing events planned for the Global Money Week to be held at the CNB in March will include a student debate on the topic FOR or AGAINST the introduction of the euro in Croatia. In the past two years we have had great success with such debates. While pupils and students engage in a debate, we sit by and listen to them. So far they have covered a range of topics; from student loans to cash vs. cashless transactions, engaging wholeheartedly in the debates and exchange of their informed opinions. It is nice to see some two hundred young people in a discussion in the CNB's Round Hall and I am confident that they will show great interest for the topic of the euro. This year's debate will gather students from all over Croatia and will be streamed live on CNB Facebook.

It is important to inform the public about financial literacy as a tool for survival in a modern society and to affirm the culture of personal responsibility in financial affairs. No statistics on the efforts put into financial education can replace conscientious and responsible behaviour on the part of individuals in financial transactions they enter into, Vicegovernor Fras concluded.

In his opening remark, the Finance Minister Zdravko Marić pointed to the results of a joint CNB and Hanfa survey which showed that in terms of financial literacy of its citizens, Croatia ranked 29th out of 31 European countries. He added that such results sent out an alarm signal to all institutions in Croatia and showed the importance of an on-going education of citizens in the area of financial literacy in ensuring better management of their personal finances.

Assistant professors Andrea Lučić and Dajana Barbić of the Faculty of Economics and Business Zagreb presented at the forum the results of the survey "Financial Education, a Means to a Better Life in Retirement", conducted on a sample of 128 respondents in seven cities across Croatia, participants in workshops "Finance for Everyone". Although over one half of respondents described their financial literacy as average, most of them (64%) showed great interest for topics related to personal finance. As regards pension planning, survey results showed that almost one half of respondents did not even have an approximate plan for pension financing and many found that the government should provide for both the first and second pillar pensions. Many respondents (58%) found that their financial situation was in their own hands and that they had the financial resources for financial success. However, only 44% thought themselves qualified to make financial decisions although they found it vital to make financial plans and budgets. The results of the survey also showed that that respondents' knowledge about personal finances and pension planning had increased after workshop participation.