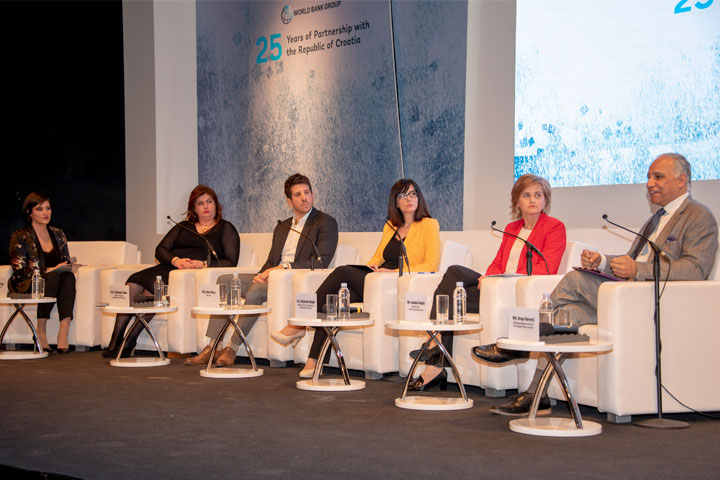 "Croatia has its advantages as an investing destination, the most significant ones being the relatively favourable operating expenses, good business infrastructure, multilingual skills of Croatian workers, excellent education of mechanical and electrical engineers, a growing start-up scene, openness to foreigners and a good quality of life. The latter is particularly important in this day and age when locations are competing for talents and when good living conditions at the place of work are one of the criteria according to which top talents choose the location of their employment. There are, however, many disadvantages, such as the high tax and administrative burden, the strong influence of the government and the power of political elites at all levels – local, regional and national, and the lack of labour force, caused by both population ageing and migration to other countries", Deputy Governor of the Croatian National Bank Sandra Švaljek said at the panel discussion "The Effect of Fast Technological Change on Education, Skills, Business Environment and the Labour Market" held on 13 March at the Small Hall of the Vatroslav Lisinski Concert Hall as a part of the 25th anniversary of partnership of the Republic of Croatia and the World Bank Group. Policies aimed at removing these disadvantages should focus on three areas: the implementation of structural reforms in all government levels, strengthening entrepreneurs by supporting digital entrepreneurship and strengthening employees by developing their competences to meet the needs of the digital age. Measures directed at entrepreneurs should, among other things, include the support of mentorship and peer-to-peer learning and the infrastructure supply for digital entrepreneurs. As regards measures aimed at employees, Švaljek stressed the need to promote adult learning, as it is necessary, in times of technological change and prolonged life expectancy, to enable employees to acquire new skills and knowledge during their working life as previously acquired knowledge becomes obsolete and unnecessary. Deputy Governor mentioned that only 3% of labour force is included in learning programmes in Croatia. She particularly stressed that the labour market and the educational system in Croatia are poorly connected, as confirmed by the fact that every third student earns a degree in economics or law, while the economy lacks experts with STEM knowledge and skills.

The conclusion of the panel discussion, which gathered Luka Abrus, CEO and co-owner of the company Five (Pet minuta), Blaženka Divjak, Minister of Science and Education, Gabrijela Žalac, Minister of Regional Development and EU Funds and Arup Banerji, regional director of World Bank for EU countries, was that human capital is of the utmost importance for Croatia's further development.