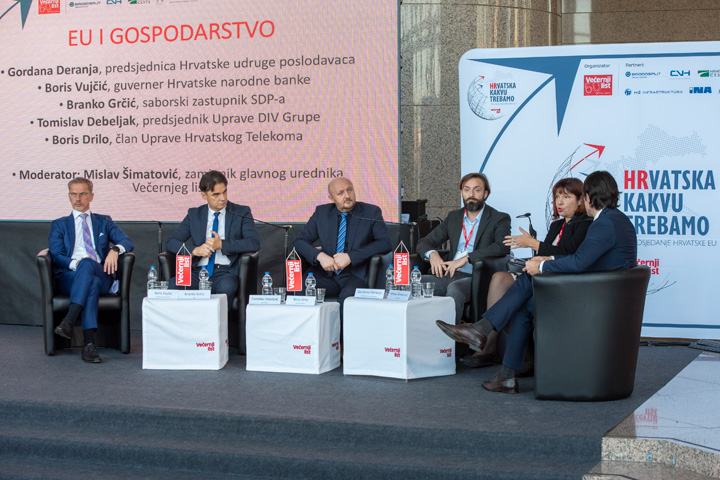 In July 2019, Croatia submitted a letter of intent for entry in the European Exchange Rate Mechanism (ERM II), undertaking to implement 19 measures in six areas within 12 months, in preparation for entry in the Banking Union and ERM II, said Governor Vujčić on 29 November at the conference “The Croatia We Need: Croatian Presidency of the EU” organised by Večernji list.

Special attention will be paid to the prevention of money laundering, and we will continue to work on a strong Croatian anti-money laundering framework in cooperation with the European Central Bank, the Governor said. Another area which we have undertaken to improve is statistical data collection and processing; our capacity strengthening in the area of statistics production has been rather overlooked in the past decades, and this can have negative consequences. Without good statistics, no sound decisions can be made, the Governor added.

At this point, the projections of the CNB, the Government of the Republic of Croatia, the European Commission and the IMF are consistent in pointing out that in the next two to three years Croatia might fulfil all the Maastricht criteria for entry in the euro area. After spending at a minimum two years in the ERM II, the European Commission will determine in the Convergence Report whether we meet the nominal convergence criteria and if so, the so- called conversion exchange rate to be applied upon the country’s entry in the euro area will be determined. The best indication of the conversion exchange rate will in fact be the exchange rate that we will determine in a few months and that will be used upon entry in the ERM II. The conversion exchange rate will be defined by law and all kuna assets and liabilities will be converted into euro at that exchange rate exclusively, the Governor stressed.

As regards Croatia’s sovereignty after the entry in the euro area, nothing will change much – Croatia will remain responsible for some 80% of economic policies, and it is entirely up to us what we will do with them. This is good because it will shift the focus from what monetary policy can do to issues of much higher importance for Croatia, such as structural policies in high-level problem areas, the Governor said. The Croatian National Bank will continue to pursue macroprudential policy; we will have even more freedom in the management of international reserves of the Republic of Croatia and thus potentially generate higher yields; the payment system remains in our hands and so does monetary policy implementation and statistics and research. We will continue to issue currency, while supervision of systemically important banks will be carried out in cooperation with the European Central Bank and supervision of other banks will be carried out by the CNB. What scares the public the most in regard to entry in the euro area is a sharp rise in prices, but this is a myth; there is no statistics in support of such claims in the countries that have introduced the euro. The statistics shows that in the year of entry in the euro area, the rate of inflation in these countries rose by 0.2 percentage points as a result of the introduction of the euro, the Governor added.

The process of the introduction of the euro and entry in the euro area provides additional boost to macroeconomic policy discipline. This is because, on the one hand, account must be taken of the Maastricht objectives during this process and on the other, because we will be subject to closer scrutiny within the European Semester following entry in the euro area. This is particularly good for fiscal policy which may be at risk of indiscipline due to changes in political cycles, and it is important to make room for the pursuit of a countercyclical fiscal policy, the Governor pointed out.

Turning to the question of low productivity and low level of private investments in Croatia, Governor Vujčić said during the panel discussion “EU and the Economy” that the private sector would invest as soon as it recognised market potential and demand, adding that business climate in Croatia had not been stimulating for investments for years. We have not been able to attract sufficient foreign investment in the export sector, and therein lies one of the reasons for low productivity. Croatia has to formulate incentive structural policies and investment frameworks, both as regards regulation and system of taxation, the Governor added. Many things in Croatia are done improptu, without any well-devised government strategies, which confirms the bad state of our investment climate. The entry in the euro area will make us more interesting for investments, but that alone isn’t enough, said the Governor in conclusion.