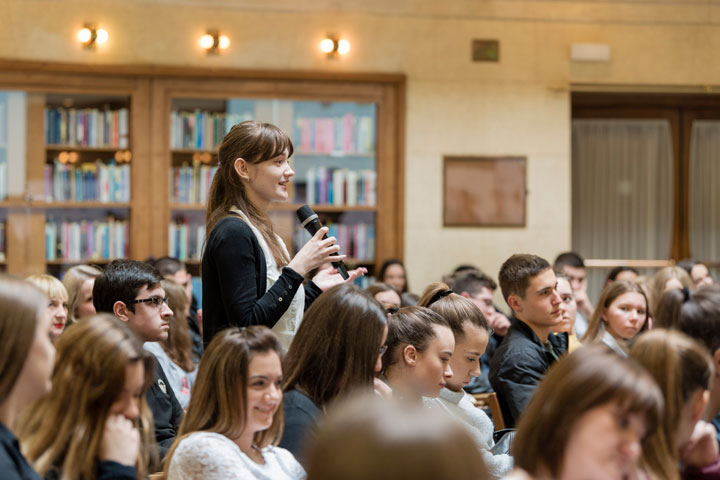 "Financial services are complex and carry a lot of risks, therefore, consumer information and education is crucial," said the Croatian National Bank Governor, Boris Vujčić, at the main event marking the World Consumer Rights Day that took place at the Mimara Museum in Zagreb on 15 March, organised by the Ministry of Economy, Entrepreneurship and Crafts. At the round table on the topic of "How to raise awareness of consumers in the Republic of Croatia?", the Governor noted that the CNB does not address individual consumer complaints, but supervises and determines whether institutions that fall within its competence comply with applicable legislative and other provisions on consumer protection and ensures that consumers are transparently provided with accurate and up-to-date information. The CNB also issues recommendations and publishes a set of information, alerts and explanations for consumers on its website and Facebook profile. The CNB places special emphasis on the education of young people, primary school pupils and secondary school students who are yet to be faced with making financial decisions, the Governor said and announced CNB's additional educational activities.

During the whole day, consumers had the opportunity to learn more about their rights or topics of their interest or concern at info points (among which the CNB's) at the Mimara Museum Atrium. Visitors could browse through three new CNB's brochures on the topics of savings, loans and payment accounts. The "Handbook for Consumers" was published to mark the occasion, prepared in cooperation with other institutions – stakeholders of the consumer rights protection policy – with the participation of the CNB. The handbook contains the answers to the most frequent and most important questions raised by the users of financial services. The answers will soon be presented on the Croatian National Bank's website and Facebook profile.

The CNB organises financial literacy workshops for pupils and students who visit the CNB. On the occasion of marking the Global and European Money Week, i.e. the Consumer Rights Week, this activity was particularly intensified. In the weeks from 5 to 16 March 2018, 649 secondary school students from all parts of Croatia attended lectures at the CNB on key terms in the area of finance and CNB's activity. The participants received information necessary for a good quality and independent personal finance management. In 2017, 2679 pupils and students participated in some form of financial education at the CNB.

The big student debate, co-organised together with the Croatian Debate Society, was held on 16 March 2018 in the Round Hall at the CNB's main building. The debate was the main event of the weeks dedicated to finance and consumers. This year, more than 200 secondary school students debated the topic of the Euro in Croatia – PROS and CONS. A very lively and interesting debate was preceded by the keynote speeches of CNB's Governor Boris Vujčić and CNB's Vicegovernor Bojan Fras who informed the students about the CNB's activities in the field of economic and financial education, with the participation of around 5,800 students in the past three years.

The audience, consisting of secondary school students from Zagreb and other Croatian towns as well as students – debaters from Zagreb schools, was more in favour of the arguments of the negative team. Students' comments and questions have shown that their prevailing concern is the possible increase in prices following the adoption of the euro and the loss of an independent monetary policy. However, students also emphasised the concern about their lack of knowledge about the topic of the debate, insufficient knowledge of finance in general, and a certain lack of interest among young people and other Croatian citizens in the topics of general social importance. Despite their support for the negative team, students expressed their wish and need for a broader and better financial literacy as an integral part of the secondary school curriculum, for better information about the topic of the adoption of the euro, in particular with the contribution of the media and independent institutions, such as the Croatian National Bank.

The debate was live streamed via the CNB's Facebook profile and the CNB's website and the video was viewed by over 4 thousand viewers.

Counterfeits in the Republic of Croatia

On 12 March 2018, on the occasion of marking the European Money Week, Petra Poldrugač, Senior Adviser at the CNB's Currency Department, gave a lecture at the Faculty of Economics in Osijek on the prevention of counterfeiting currency in the Republic of Croatia. The lecture was dedicated to the topics of the security features of banknotes of kuna and foreign currencies, CNB's cooperation with institutions in the country and abroad and methods for the prevention of counterfeiting.  Ms Poldrugač presented the statistical data on registered counterfeits withdrawn in the territory of the Republic of Croatia and elaborated on the trends in counterfeiting that had been observed in the past years. The actual cases registered in the territory of the Osječko-baranjska County Police Administration and covered by the media raised particular interest among the audience. The lecture was closed by a brief presentation of counterfeit banknotes received at the CNB and their comparison with the original banknotes of the same denomination in which students took part in identifying counterfeits and in a discussion about the manner of their authentication.

At a meeting dedicated to the financial education of young people held at the Ministry of Science and Education of the Republic of Croatia on 5 March 2018, on the occasion of marking the European Money Week, the CNB introduced its activities aimed at increasing economic and financial literacy among pupils, students and teachers, and opportunities for cooperation between educational establishments and the central bank in this area.

Pupils, students and teachers have shown great interest in presentations on the activities of the Croatian central bank that have been organised at the CNB for over 20 years. It is also evident from the fact that many teachers attend them every year accompanied by the new generations of young people. The teachers were very interested in the possibility of CNB's holding seminars on all aspects of its activities designed for teaching staff. The first in a series of such lectures will be held in April 2018.