Comments on monetary developments for October 2021

Total liquid assets (M4) and money (M1) increased slightly in October and their growth rates remained at a very high level on an annual basis. The largest continuous contribution to the increase in monetary aggregates was made by foreign exchange transactions (i.e. a rise in NFA) so that monetary aggregates grew faster than domestic placements.

The total placements of monetary institutions to domestic sectors (except the central government) rose in October after falling in the previous two months.

Total liquid assets (M4[1]) increased moderately in October (by HRK 0.7bn or 0.2%, based on transactions) from September, due to the rise in net domestic assets (NDA) of the monetary system and the unchanged level of net foreign assets (NFA), ending the month at HRK 399.5bn (Table 1). The monthly increase in NDA was mostly driven by the rise in net claims on the central government (claims held steady and the government kuna deposits with the CNB decreased) and the increase in placements to domestic sectors. In October, money (M1[2]) also increased by HRK 0.7bn (0.4%) thanks to a growth in demand deposits of all domestic sectors (Table 3), while quasi-money remained almost at the same level as in the previous month. On an annual level, the annual growth rate of M4 decelerated slightly from 11.4% in September to 11.2% in October, and M1 decelerated from 20.7% to 20.6%, due to the base effect, i.e. a stronger growth in M4 and M1 in October of the previous year (Figure 1). The strong annual rise in M4 and M1 was largely driven by money creation by means of foreign exchange transactions (i.e. a rise in NFA) and depositors’ constantly strong propensity to increase deposit amounts in transaction accounts in a low interest rates environment.

Total placements of monetary institutions to domestic sectors (except the central government) increased by HRK 1.2bn or 0.5% (based on transactions) in October from the month before, ending the month at HRK 242.7bn. The annual growth rate of total placements accelerated from 4.1% in September to 4.5% in October (Figure 2). The monthly increase in placements was almost entirely due to the growth in loans, which stood at HRK 236.9bn in October (Table 2). Broken down by sectors, household loans (HRK 0.5bn or 0.3%) as well as corporate loans (HRK 0.5bn or 0.6%) increased, and the rise in loans to other financial institutions was also recorded (HRK 0.2bn or 1.7%). The growth of loans to households was mostly fuelled by housing loans (HRK 0.2bn or 0.3%), although their growth was perceptibly smaller than that during the implementation of the new round of the government housing loans subsidy programme, so that their growth accelerated only slightly on an annual level (from 11.2% in September to 11.3% in October). General-purpose cash loans also grew by HRK 0.2bn or 0.3% on a monthly basis, with their annual growth rate accelerating from 1.3% to 1.6%. Consequently, the annual growth rate of household loans accelerated moderately from 4.8% to 4.9%. The growth of corporate loans accelerated significantly on an annual level (from 1.0% to 1.8%) compared with their decrease in the same period of the previous year. 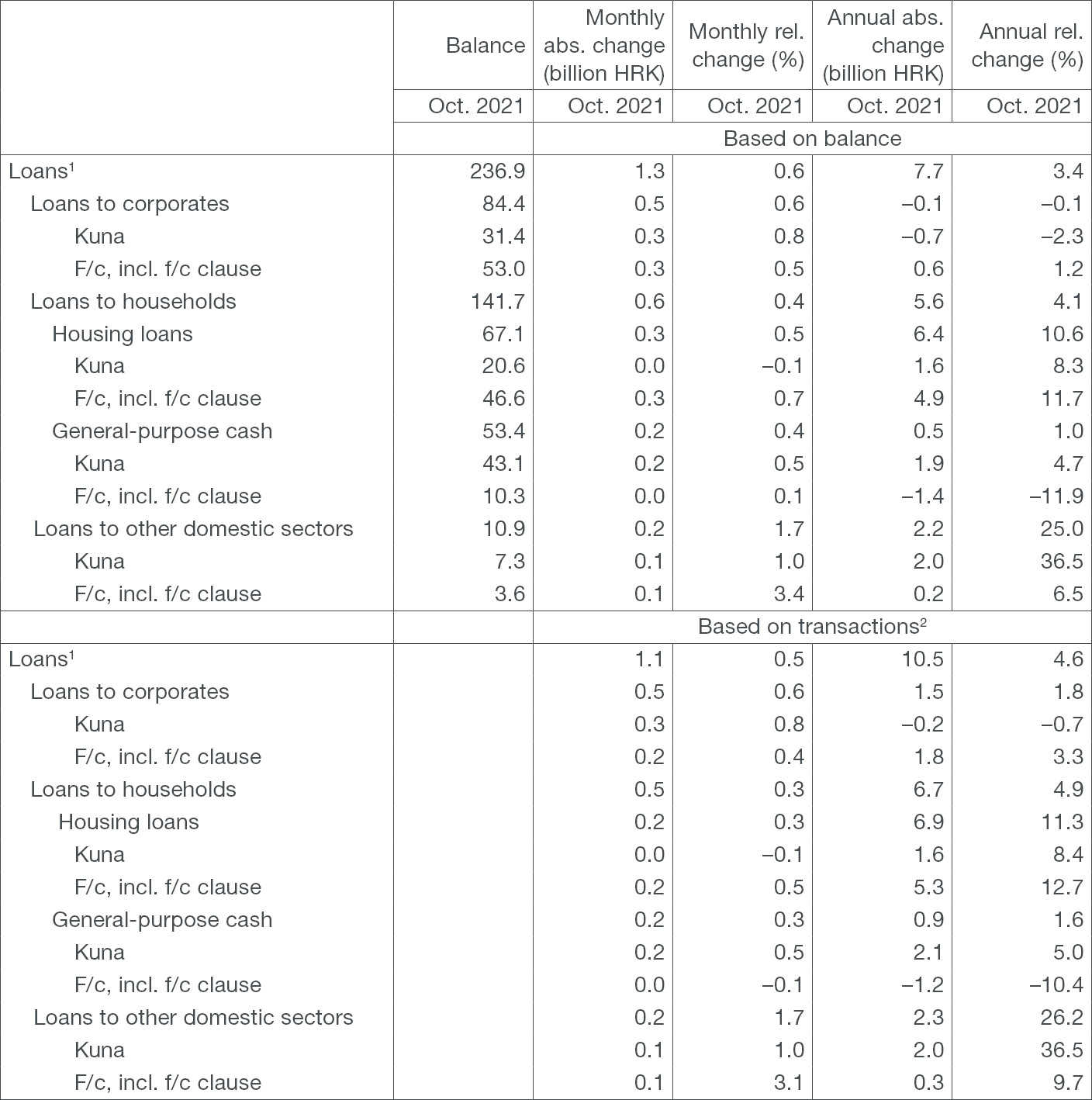 1 In addition to loans to corporates and households, they also include loans to the local government and other financial institutions.
2 The transactions show changes that exclude the effects of exchange rate changes, securities price adjustments, reclassification and write-off of placements, including the sale of placements in the amount of their value adjustment.
Source: CNB. 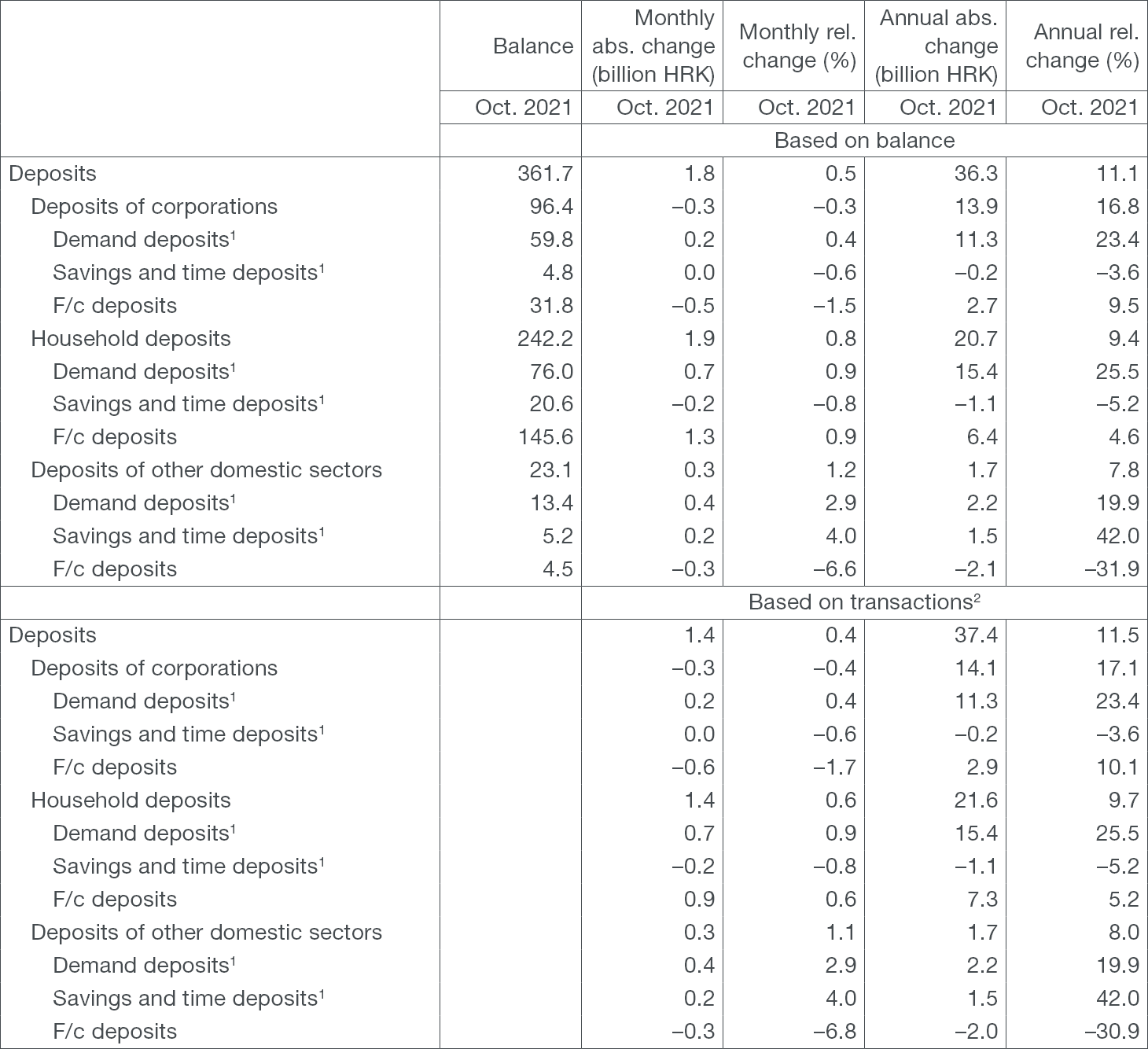 For detailed information on monetary statistics as at October 2021, see: