The current and capital account of the balance of payments ran a surplus of EUR 4.8bn in the third quarter of 2019, which is an increase of EUR 0.8bn from the same period in the previous year. The significant improvement of the balance was due to positive trends recorded in all sub-accounts, and especially in foreign trade in services. Observing the last four quarters of the year, the current and capital account surplus stood at 4.3% of GDP at the end of the third quarter, exceeding the 2018 surplus by 1.0 percentage point.

The primary income account deficit decreased by EUR 0.1bn from the same period in the previous year, primarily due to a strong growth in revenues from the compensation of residents temporarily employed abroad. The negative portfolio investment income balance also decreased, although to a lesser extent, due to an increase in revenues from resident investments in foreign securities.

The sum of the secondary income account balance and the capital transaction account balance rose noticeably in the third quarter of 2019 from the same period in 2018 (by EUR 0.2bn), with the rise primarily due to a strong growth in net revenues from transactions with the EU budget. As regards the purpose of funds disbursed to end users, approximately three fifths of the total amount were accounted for by capital revenues. Regarding the end user sector, slightly over a half of EU disbursed funds was related to the government. In addition to transactions with the EU budget, also fuelling the increase in the secondary income account was a further growth in revenues from personal transfers.

1The sum of the last four quarters

The financial account of the balance of payments recorded a net capital outflow of EUR 3.4bn in the third quarter of 2019, an increase of EUR 0.7bn from the same period in the previous year. Broken down by individual accounts, the largest net capital outflow was recorded in the other investment account, while the direct and portfolio investment accounts had net capital inflows. International reserves grew, primarily due to foreign exchange purchases through foreign exchange interventions and, to a smaller degree, to an increase in government deposits.

The net capital inflow in the foreign direct investment account (EUR 0.3bn) in the third quarter of 2019 was predominantly due to the retained earnings of foreign-owned domestic enterprises, particularly those engaged in financial intermediation, accommodation and trade. In addition, the inflow of equity investment in Croatia was considerably higher than in the same period in the previous year. The new investment, other than that made in the real estate sector, was also made in manufacturing, primarily in the manufacture of motor vehicles and food products. Domestic enterprises continued to deleverage against affiliated creditors abroad, although at a slower pace than in the same period in the previous year. 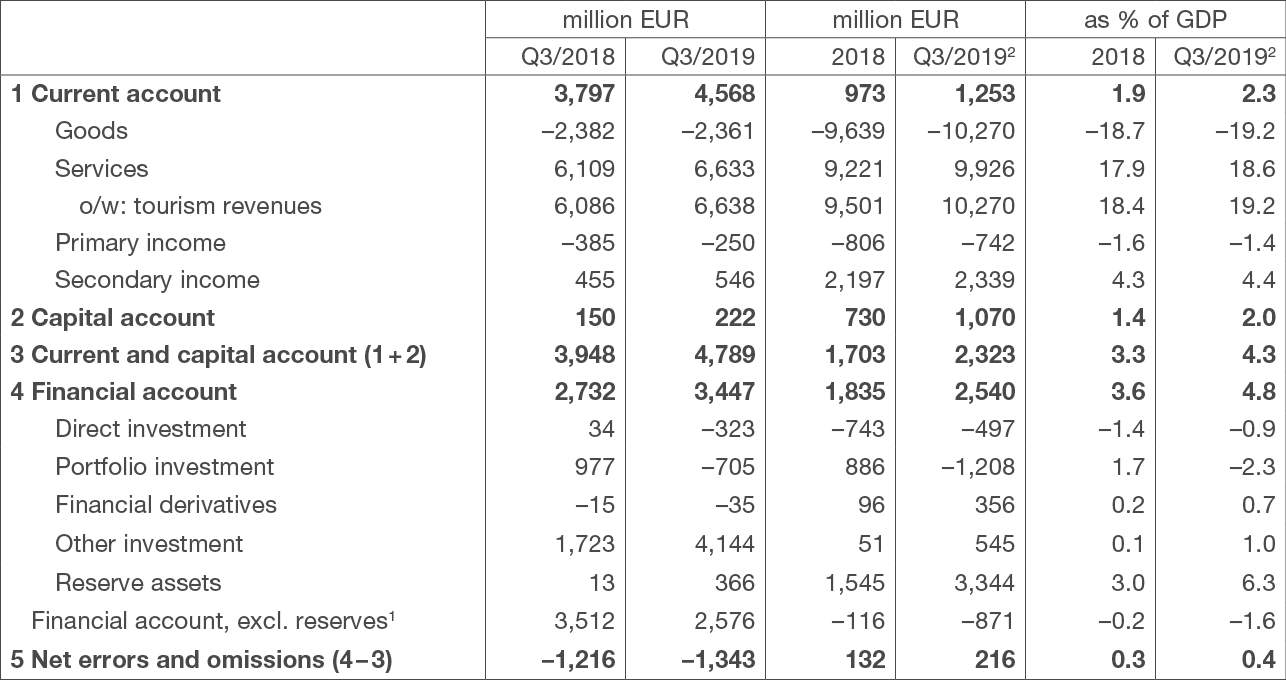 1 Excluding the change in the gross international reserves and foreign liabilities of the CNB; the investment of a portion of international reserves in reverse repo agreements results in a simultaneous change in CNB assets (recorded in the reserve assets account) and liabilities (recorded in the other investments account) and thus has a neutral impact both on changes in the central bank's net foreign position and the overall financial account balance.

The sum of the last four quarters. 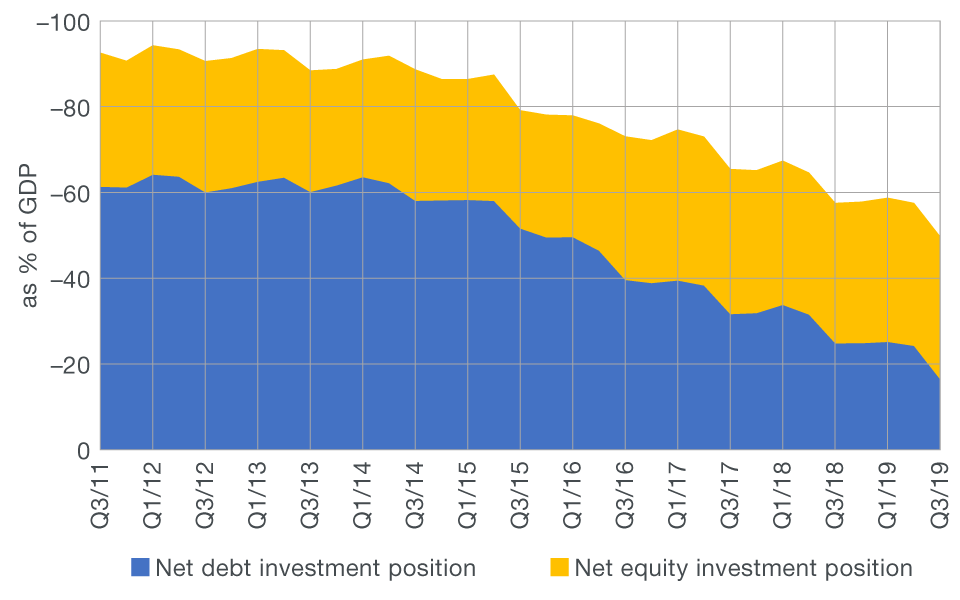 Data on the balance of payments and the international investment position are revised in accordance with the commonly used practice, based on subsequently available data.