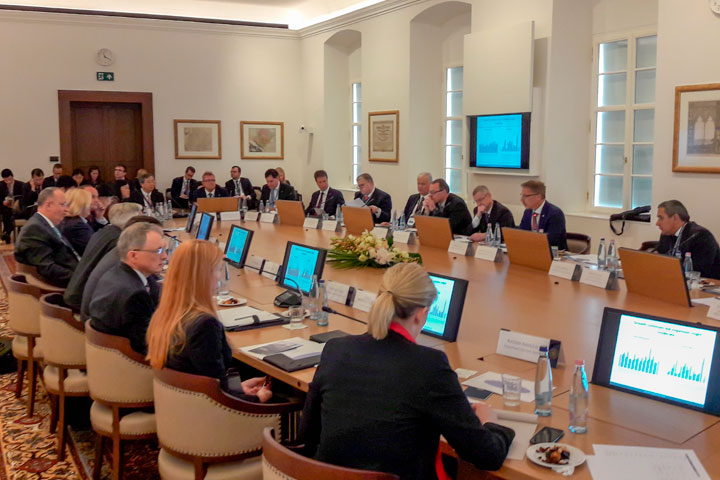 Economic expansion in the CEE region can be expected to continue in the near term supported by still favourable cyclical conditions. However, in many countries pace of growth might moderate, partly due to supply side constraints and maturing business cycles. Potential growth estimates indicate that in all countries output gaps are positive or have been closed, and unemployment rates are close or below pre-crisis levels, pushing-up the wage growth.

While such a positive outlook for future growth is somewhat disturbed by rising risks to the global economy, such as escalation of trade tensions or tightening of financial conditions, CEE countries seem to be in a generally good shape to withstand the impact of negative shocks. Current account positions have improved and in many countries turned into surplus, while international liquidity positions are ample. Also, economic recovery coupled with efforts to push through fiscal adjustment programs led to improvement of general government balance and public debt was put on a declining path. Furthermore, financial systems in most countries remain robust and resilient, as attested by withstanding the shocks emanating from the global financial crisis and the European sovereign debt crisis.

Despite fair growth prospects and subdued vulnerabilities, medium-term growth potential in the region seems insufficient to ensure pre-crisis pace of real convergence. The most recent data shows that the convergence is still there, but it has markedly slowed down. At the current pace, many countries in the region would need decades to reach German, Austrian or Swedish levels of income, countries that we like to use as benchmarks. The last crisis also showed that there can be events that will hold back growth and convergence for a protracted period of time and even work in an opposite direction, leading to divergence. We know that when it comes to living standards, in the long-run it is all about labour productivity, which can be decomposed into growth of capital per worker and growth of total factor productivity (TFP). While we can expect an investments to continue growing, it is not likely that the rates that we have witnessed in 2000s, with strong inflow of FDIs and related transfers of technology and know-how, will be seen again in the near future. That is why the TFP will ultimately prove to be the major determinant of long-term convergence.

For us as policy makers, understanding the determinants of technology adoption, the TFP growth, is the key, as this gives us the channel to act through. There is an increasing number of theories and empirical papers linking development and the adoption of technologies to the role of institutions defined in a very broad way. And data support such outcome, here on a sample of emerging market countries. There is a strong positive relationship between quality of institutions and human capital on one side and growth on the other. Furthermore, in the context of new EU member states, countries with better institutions tend to withdraw more EU funds, which is another channel through which the government can help to increase the growth potential of a country.

When it comes to quality of institutions, developments are not encouraging. If quality is proxied by World Bank's Worldwide Governance Indicator, there has hardly been any convergence towards Germany, which can arguably be used as a benchmark. Notable exceptions are the Baltic countries where we have seen positive developments also in the aftermath of global financial crisis. CEE countries also lag behind when it comes to the quality of human capital compared to those EU countries that achieve the best results in PISA test in Math and Science (Finland, Sweden, Austria, and Germany). Developments over time are also not encouraging as in many countries the PISA results have actually worsened during the last decade, which is a phenomena not confined only to the CEE region, but to the wider Europe.

Such developments are on the one side worrisome, but on the other give us the opportunity to streamline and speed up reforms because potential gains can be substantial. European Commission has estimated that structural reforms that close only half the gap with best performers in different areas (market competition and regulation, R&D expenditure, skill structure, tax structure, labour market participation, unemployment benefit ‘generosity’ and active labour market policies), which does not appear to be overambitious, could have significant macroeconomic effects. The level of GDP in 10 years after the reform would be around 7% higher in the CEE countries and around 12% after 20 years compared to the "no reform" scenario with effects on employment reaching a similar magnitude. The IMF also points to significant benefits of structural reforms in terms of TFP improvements. Even if we consider these estimates as somewhat optimistic, welfare advances would be substantial.

But how to get structural reforms right? There are in general two dimensions of structural reforms. First, and in principle the easier one, are the reforms that bring us closer to the efficiency frontier. That said, it is quite likely that most of the low hanging fruits of productivity gains from sectoral reallocation and imports of foreign technology have been collected and further improvements may require a new generation of reforms. This second generation are the reforms that expand the frontier. They encompass, among others, product market reforms, competition policy, labour market reforms, public finance and taxation (including social security system), human capital development, innovation policy, etc. Can we and should we act on all or most of these different fronts simultaneously? Probably. Do we as economists and policymakers truly understand all the synergies, complementarities and marginal effects of different reforms? Probably not to the extent that we would like. Are we on the same boat when it comes to their positive gains and externalities? I would dare say yes.

We also have to keep in mind the political economy dimension of the process. We need to ensure broad support for the reform agenda especially since there might be some short-term costs of certain reforms. In that sense, lacklustre support for market economy and democracy as well as low faith in justice systems in CEE countries compared to long establishes democracies might complicate matters further. This is where policy transparency and communication plays an important role. Clearly, not everything we do will always get full support from the broad public, particularly in the case of structural reforms with long-term gains and short-term costs, but sometimes boldness is rewarded beyond our expectations.