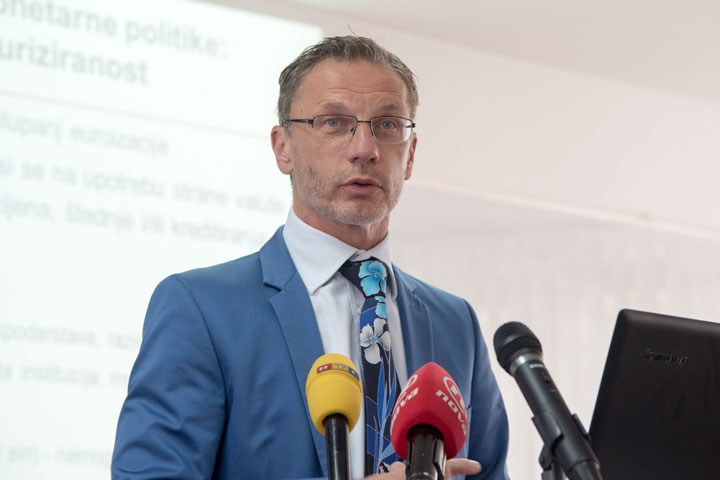 He also addressed restrictions to monetary policy in Croatia, in particular the high euroisation of deposits and placements and the high external debt of all the sectors which pose a risk to financial stability. There is also the issue of high import dependence of the Croatian economy, which is a small and open economy with a high share of exports and imports in GDP (around 50%).  In such conditions, the CNB achieves price stability, its main objective, and the objective of maintaining financial stability, by maintaining the stability of the nominal exchange rate of the kuna against the euro. Explaining the main reasons behind euroisation, the Governor underlined the history of high inflation, the proximity of large economies, the level of openness of the domestic economy, transfers, the quality of institutions, network externalities, that what is called the original sin - inability to borrow abroad in the domestic currency, as well as long-term proponents of kuna devaluation receiving substantial media coverage who have also contributed to maintaining euroisation on a high level. The CNB continuously pursues the policy of discouraging euroisation by imposing higher relative regulatory cost and encouraging kuna lending, maintaining at the same time the stability of the exchange rate.  The CNB benefits from lower euroisation the most, as it provides it with the space to act freely, noted the Governor.

The CNB will continue to pursue an expansionary policy, supporting high monetary system liquidity by means of structural and regular repo operations and, if necessary, foreign exchange interventions. In doing so, the CNB contributes to the improvement in the domestic financing conditions and recovery in the domestic credit activity. The CNB's expansionary monetary policy has contributed to the reduction in the kuna yield curve, particularly on medium/longer maturities, the development of the domestic market for kuna government securities and has encouraged the banks to increase kuna lending. The banks that participated in structural repo operations were able to halt the fall in lending. In addition to favourable developments in credit supply and demand, the results of the expansionary monetary policy are visible in a continuous improvement in financing terms and lower interest rates for all the sectors. A growing number of economic activities report credit growth, with the exception of the construction sector which does not follow suit, having been the hardest hit sector during the crisis and one with the largest amount of non-performing loans.  In addition to pursuing an expansionary monetary policy, the CNB will continue to work hard on preserving financial stability, particularly on better banks' provisioning policies which have also encouraged banks to step up their activities towards elimination of non-performing placements.

In conclusion, the Governor stressed once again that increased competitiveness of the domestic economy, based on structural reforms and exports growth, concomitant with the containment of macroeconomic imbalances and further consolidation of public finances is the key to a stronger economic recovery.

The presentation by the CNB Governor may be found here.