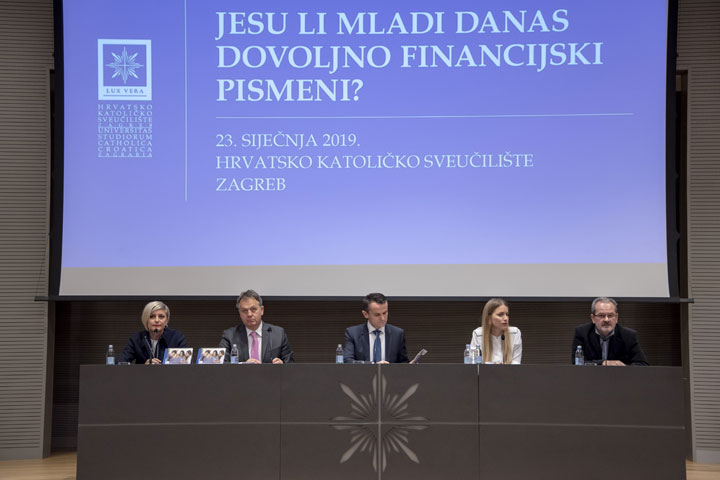 Young people should be taught about personal finances at an early age, during their primary and secondary education and this type of education could be made a part of the basic curriculum, said Boris Vujčić, the Governor of the Croatian National Bank on the occasion of presentation of the results of the project “How financially literate are young people today?” held on 23 January 2019 in Zagreb and organised by the Catholic University of Croatia.

He underlined that global research and research into the level of financial literacy under the OECD survey model carried out jointly by the CNB, Hanfa and the Ministry of Finance in 2015, showed that financial literacy of the young gave cause for concern. The consumers should be provided with education that would enable them to understand a financial product or service they are interested in and to understand the risks they are assuming, particularly in the light of growing availability of the products and services and their rising complexity. The Croatian National Bank provides ongoing educational activities. In 2018, 3 369 pupils, students, teachers and other interested parties from 29 towns in Croatia paid a visit to the central bank and a pupil debate was also held which gathered over 200 pupils and was viewed on web stream by over 4 000 persons across the country, said the Governor.

After event opening by Željko Tanjić, the Rector of the Catholic University of Croatia, Roman Šubić, Vicegovernor of the Croatian National Bank, Assistant Professor in the Department of Sociology of the Catholic University of Croatia and one of the authors of this project spoke about the results of the survey of financial literacy of the young. The results of the survey provide a comprehensive insight into the general level of financial literacy of Croatian students and clearly show substantial room for improvement and an increase in the level of financial literacy of the young as well as other citizens in Croatia, Vicegovernor Šubić noted. The conclusions of the survey could serve as a basis for some future activities; the academic community and relevant ministries could work towards introducing financial literacy in educational programmes and primary and secondary schools, respectively. The financial market regulators, the banks, the capital market and other participants in the Croatian financial market should also lend support to these programmes, Vicegovernor Šubić added.

As shown by surveys, 44% of Croatian adults are financially literate, compared with the European average of 52% and the global average of 33%.

Financial literacy may have costlier effects than basic literacy skills of reading and writing since personal financial decisions made in this area are unavoidable and the young are the most vulnerable group, noted Vicegovernor Šubić.

Of Croatian students, 72% rarely or never ask for finance-related information.

The results of the survey conducted by a team of scientists from the Department of Sociology of the Catholic University of Croatia, led by Vicegovernor Šubić, which comprised 35 study groups at seven Croatian universities, showed that as many as 72% of students in Croatia rarely or never asked for information on finance-related topics. That the value of money received at this moment would lose its value in three years was found to be true by 44% of respondents while 38% of them was not sure about this statement. As regards their familiarity with the concept of interest earned on term deposits, one fifth of respondents did not know what would happen to the amount deposited under a term deposit scheme. Were the respondents to choose between a selection of loans, 32% of them would not know which loan would be the least favourable in terms of interest rate, and only 38% of respondents knew that a loan in the form of a current account overdraft was the least favourable.

During the panel discussion, CNB Vicegovernor Bojan Fras stressed the importance of affirmation of the principle of personal responsibility in financial affairs and the importance of teaching consumers financially responsible behaviour so that they can make informed decisions about their personal finances. The CNB, in addition to educational activities which it provides on an ongoing basis, has provided consumers with an additional tool which will help them reach better financial decisions: a mobile application mHNB which gives a comparative overview of all lending terms and fees for key payment services in Croatian banks, Vicegovernor Fras added.

The participants in the panel discussion included also Ante Žigman, President of the Board of Hanfa, Dajana Barbić of the Faculty of Economics and Business in Zagreb, Drago Čengić of the Institute of Social Sciences Ivo Pilar and Tatjana Rajković, MBA, market research and analysis expert.