Features of the Labour Market and Wage Setting in Croatia: Firms Survey Results 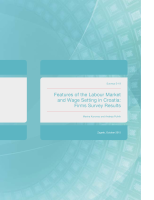 Data collected during the conduct of the survey on the labour market and wage setting in Croatia, which was conducted during the second half of 2014, within the European Central Bank’s Wage Dynamics Network (WDN) project, show that the illiquidity shock, the demand shock and unfavourable financing conditions were the most widespread economic shocks to which firms were exposed from 2010 to 2013. Firms adjusted to unfavourable economic conditions by reducing total costs, primarily labour costs. The dominant cost-cutting strategy was to reduce the number of employed persons, i.e., through individual layoffs, but also through the non-renewal of fixed-term contracts at expiration and a freeze on and reduction of new hires. In the first years of the crisis relatively few firms in Croatia resorted to nominal wage cuts in their efforts to adjust to the adverse economic shock. However, this share grew year-on-year, as did the percentage of workers affected by wage cuts. Although this information would tend to indicate a reduction of wage rigidity in Croatia, other indicators suggest that, despite this, wage setting in Croatia cannot be considered flexible. Thus a significant number of firms change wages less frequently than once a year, one third of firms index wages in relation to inflation, and collective pay agreements regulate wages for about a half of the employees in the private sector.