Preparations for a crisis should be made during the growth period 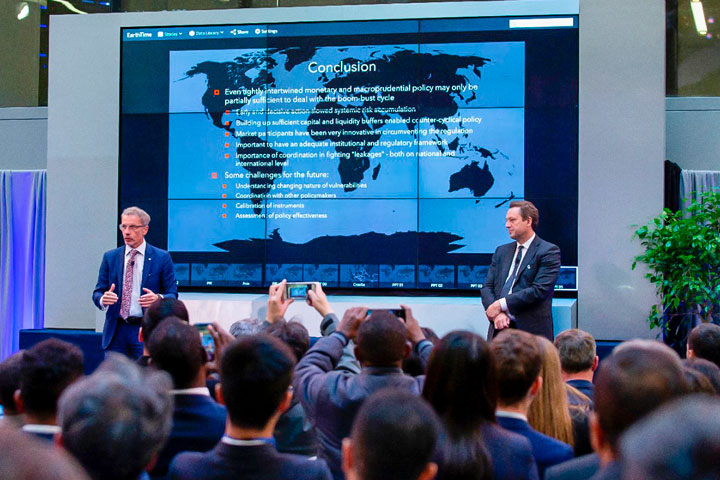 The CNB Governor Boris Vujčić participated as a speaker in the World Bank and IMF Annual Meetings in Washington with the presentation CNB's Macroprudential Policy – Leaning Against the Wind. which focused on the macroprudential policy of the Croatian central bank while also providing a broader outline of financial stability in Central and Eastern Europe – both in the pre-crisis and crisis periods – and the effects of macroprudential measures then taken on current financial stability.

The most important among a large number of macroprudential measures applied by counter-cyclical macroprudential policy in the pre-crisis period include the high levels of general reserve requirements, foreign exchange interventions aimed at alleviating appreciation pressures, administrative restriction of loan growth (16% in 2003, 12% from 2007 to 2009), minimum required foreign currency claims, marginal reserve requirement, special reserve requirements and increased capital requirements for currency induced credit risk imposed to banks. After the onset of the crisis, the system reserves accumulated in the previous period began to be gradually released. The marginal reserve requirement was abolished, the rates of general reserve requirements and minimum required foreign currency claims were reduced and credit growth restrictions were removed. These measures significantly improved system liquidity and ensured a smooth servicing of the Croatian government's liabilities to foreign creditors, with such a macroprudential policy also preserving the kuna to euro exchange rate stability and overall financial stability. By the end of 2012, the CNB released EUR 6.1bn, which is more than 14% of the total GDP. Governor Vujčić commented on the state of the Croatian banking system saying that that banks had remained stable and well capitalised during the crisis.

The Governor went on to say that even when tightly intertwined, monetary and macroprudential policies may only partially be sufficient to deal with the boom and bust cycle along the convergence path. It is therefore crucial to take timely, early action to slow down systemic risk accumulation and build up sufficient capital and liquidity buffers facilitating counter-cyclical macroprudential policy. If in a wrong place in one sequence of the cycle, macroprudential policy, as well as fiscal policy, will probably end up in a wrong place in a following one. Market participants have proven to be very resourceful in circumventing macroprudential measures, which is why the regulatory authority has to be committed to taking clear and decisive action, setting up an adequate institutional and regulatory framework as a necessary precondition for efficient macroprudential policy. The Governor concluded by saying that the challenges for the future lied in coordination with national and international policymakers in order to understand at all times the changing nature of financial vulnerabilities and to develop and apply efficient macroprudential instruments aimed at the preservation of financial stability.

The introductory address to the CNB Governor's presentation at the IMF headquarters in Washington was given by Tobias Adrian, Director of the Monetary and Capital Markets Department and financial counsellor, who also moderated the follow-up discussion. Governor Vujčić gave his presentation within the thematic section Big Data, Big Stories. The Annual Meetings of the World Bank Group and the IMF were held in Washington, from 14 to 20 October 2019.