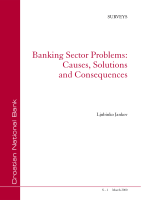 Until the mid 1980s, commercial banking was the main lever of soft budgetary constraint. Commercial banks were under the control of their founding enterprises and their basic function was to approve the cheapest possible credit to their founders. The process of reforming commercial banking began during the last ten to twelve years. Since then, new laws and other regulations have been passed that are suitable for a market economy. In late 1991, a so-called linear rehabilitation of the banks began in which the majority of bad credits by banks were written off. The linear rehabilitation of the banks did not contain measures that would lead to changes in bank operations. Banks continued to approve credit to "their" enterprises. Therefore, in 1996 the government was forced to rehabilitate three large banks. These rehabilitations were conducted in a serious manner and were based on the transfer of bad bank credits to a special agency, recapitalization, replacing shareholders and replacing bank management. After these rehabilitations, there was a large drop in the interest rate. In 1998, there was a new bank crisis that chiefly affected new banks, which had highly aggressive interest rate policies. The fundamental cause of the new bank crisis was the inappropriate credit policies of these banks, exacerbated by various external shocks. The central bank began to intervene very quickly but only after the bank crisis occurred. Although many banks failed, it is not possible to speak about the end of the banking crisis. There are still many internal weaknesses in bank operations entwined with currency and credit risks,bank investment in enterprise shares, the maturity-gapping of assets and liabilities and the discrepancy between the information about banks and the possibilities for complying with regulations. These internal bank weaknesses open the possibility for similar banking problems in the future, which should be eliminated on time. The fiscal expenditures incurred to date for the rehabilitation of banks can be estimated in the amount of 31 percent of GDP, placing Croatia among the countries with the highest expenditures for bank rehabilitation.