Results of the Third CNB Bank Survey: Croatian Banking in the Consolidation and Market Positioning Stage, 2000 - 2002 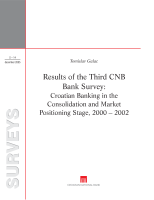 In April 2002, the Croatian National Bank conducted the third survey of banks operating in Croatia. Assessed was the quality of projections given in the second survey (conducted two years ago) that referred to banking system consolidation, the continuance of bank competition and stronger impact of foreign capital entry in the Croatian banking system. This paper compares the bankers' estimates and views on the situation and trends in Croatian banking and its environment in early 2002 with estimates derived from CNB statistics. The main conclusion of the analysis is that a short but turbulent stage of consolidation and market positioning of banks has almost ended. Its positive effects have been reflected in a strong decline in interest rates, increased household lending and more favourable long-term corporate lending. On the other hand, numerous challenges are still waiting on the development path of the Croatian banking system, among which are better and faster legal protection of creditors, more sincere relationship between banks and the central bank, and harmonisation of banks' risk management systems and processes with new international standards.