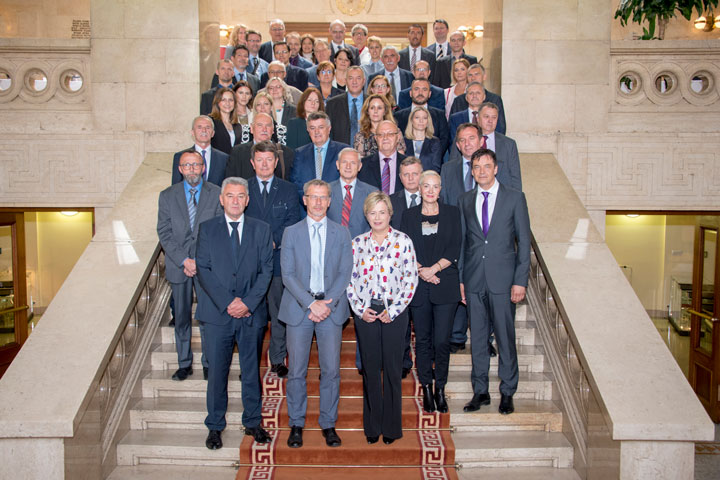 Croatian goods exports have risen 40% over the past five years and that period has also seen a considerable increase in the number of exporting companies, all attesting to the positive effects of Croatia's accession to the EU, noted CNB Governor Boris Vujčić at the roundtable discussion with the representatives of HGK Headquarter in Zagreb and HGK County Chambers, held on 23 May 2018, an event jointly organised by the Croatian National Bank and the Croatian Chamber of Economy.

Gordi Sušić, Director of the Economic Analysis Department of the Croatian National Bank noted that high surplus liquidity, spurred by expansionary monetary policy led to a fall in bank interest rates over the years which, coupled with growing demand and more favourable lending terms resulted in a recovery in corporate and household lending.  Household demand for kuna loans, mostly cash and general-purpose loans has been growing in the past several years and since 2017, the demand for home loans has grown too.  A faster sale of non-performing placements also contributed to an improvement in the banks' credit portfolio quality. A total of HRK 8.1bn (2.2% of GDP) of non-performing placements were sold in 2017.

The indicators of price competitiveness, in the calculation of which the euro area accounts for its the greatest part, started improving in the wake of the outburst of the crisis, however, the share of Croatian exports only began recovering following accession to the European Union, suggesting that real exchange rates do not determine the dynamics of Croatian goods exports.  Also noted was the fact that Croatia needed to improve its non-price competitiveness (product quality and level of technological intensity). The recent growth in goods trade is widely distributed, and the share of major exporters in the manufacturing sector has been falling, while the share of medium-sized and small companies has been growing. However, despite their growth and wide distribution, the Croatian goods exports are still poorer than in peer countries, in contrast with services exports. Despite improvements in exports since accession to the EU, their structural weaknesses are still there, noted Sušić.

The participants in the roundtable discussion, in addition to Governor Vujčić and Director Sušić of the CNB, were Mirjana Čagalj, Vice-President for Construction, Transport and Connections of HGK and the representatives of the Croatian Chamber of Economy, the Croatian National Bank and HGK Headquarter in Zagreb and County Chambers. They discussed the importance of the need for structural reforms, attracting foreign investments in Croatia, better absorption of EU funds and a large number of administrative obstacles standing in the way of doing business in Croatia.

Also highlighted as one of the problems was labour shortfall in some sectors.  Mirjana Čagalj noted that the Croatian Chamber of Economy had initiated foreign workers quota increases, adding that the obtained quota could not be fully met due to a falling number of workforce who finds work conditions in Croatia acceptable.