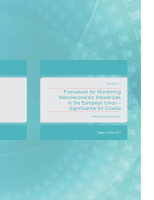 A package of legislation aiming at enhancing the resilience of the EU economy to future financial crises entered into force in the European Union in December 2011. One of the most important elements of the new economic governance framework is the establishment of the Macroeconomic Imbalance Procedure (MIP). The MIP is created to complement the system of surveillance of Member States' economies because enhanced surveillance in the existing framework existed only in the area of fiscal indicators, in accordance with the provisions of the Stability and Growth Pact. Since there was no surveillance mechanism for other variables, Member States that recorded other types of macroeconomic imbalances were not obliged to conduct any corrective measures with regard to the identified imbalances. The establishment of the MIP should thus improve the resilience of the EU economy since its consistent implementation would decrease the probability of unwanted events of the kind that occurred after the last financial crisis. A total of 11 indicators are monitored within the MIP and they assist in identifying macroeconomic imbalances. In addition to indicators of external vulnerabilities and internal imbalances, the MIP encompasses also indicators that can imply the weakening of the competitiveness of an economy. When an excess over the threshold for a certain indicator is identified for an individual Member State, the European Commission initiates an in-depth review of its economy in order to identify possible macroeconomic imbalances, and if there are some, assesses whether they are excessive or not. Starting with the MIP for 2014 Croatia is also covered by this monitoring of macroeconomic imbalances in the EU, so this paper serves to further assess Croatia's performance with regard to individual indicators, and it discusses the possible consequences of participation in such a procedure for the Croatian economy.