Exposure of the Private Non-financial Sector to Interest Rate Risk: Analysis of Results of the Survey on Interest Rate Variability 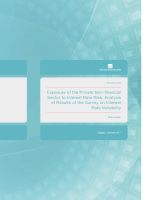