What Has Been the Impact of Foreign Banks in Croatia? 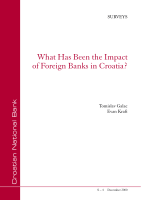