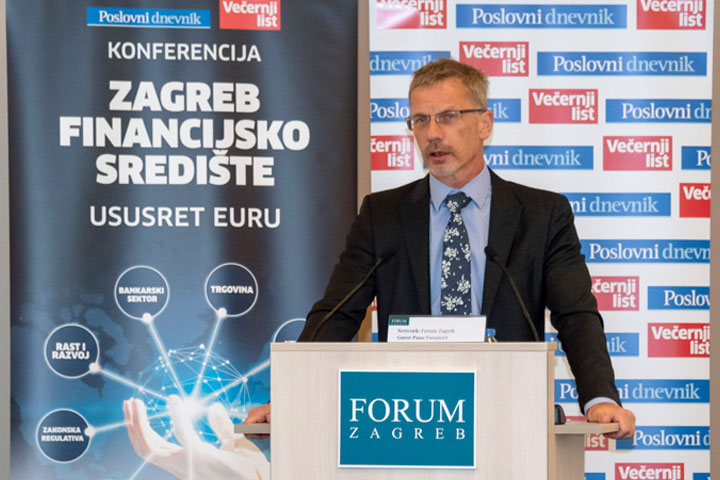 Benefits of euro adoption significantly outweigh the costs, emphasized Boris Vujčić, the Governor of the Croatian National Bank, at the presentation given at the conference "Zagreb as the financial centre and its pathway towards the euro", organised by the Croatian dailies Poslovni dnevnik and Večernji list and held on 30 October this year in Zagreb.

Over the course of the past year, since the Eurostrategy was presented to the public, the Croatian National Bank has held a public consultation within a series of professional presentations and debates, and today we are strongly supported by the professional public and the business world, the Governor continued. In terms of population and GDP, Croatia is the smallest country among the EU member states that have not introduced the euro yet, but at the same time, it is the most euroised member state outside the euro area, which makes the benefits of euro adoption even greater.

Negotiations with the European Commission and the European Central Bank are currently underway, and we are preparing the letter for the participation in the ERM II exchange rate mechanism, which we plan to send next year. We are also preparing to fulfil all obligations arising from the process.

We need to use the period preceding euro adoption, which will surely last several years, as an impetus to implement structural reforms, because they are the best guarantee for Croatia's successful participation in the euro area, the Governor said. Favourable current trends seen in macroeconomic indicators, such as falling unemployment and decreasing external and public debt, need to be sustained in order to improve Croatia's review results with regard to excessive macroeconomic imbalances. At the same time, numerous structural reforms have to be continued. Although not all of them can be implemented in the short term, some of them, such as the tax reform, have been implemented already, while some are currently undergoing public consultation or are being implemented, such as the reforms of the pension system and the primary and secondary education system.

Although potential GDP growth will increase after Croatia joins the euro area, euro area membership alone is neither a guarantee of an economy's success nor an umbrella protecting countries from bad economic policies. It is rather something that a country may use provided it has the right, clever policies in place, the Governor noted.

As a part of the preparations for euro adoption, Croatia will apply for entry into the mechanism of close cooperation with the European Central Bank with the aim of becoming a member of the banking union upon the entry into the ERM II. The banking union is an ongoing project consisting of three pillars: the Single Supervisory Mechanism, the Single Resolution Mechanism and the single deposit guarantee scheme. Reminding that banks in Croatia will, prior to joining the banking union, once more have to undergo the asset quality review (AQR), the Governor expressed his firm belief that the review will be successful and confirm the high capitalisation of Croatian banks, satisfactory liquidity and the overall health of Croatia's banking system, proving its readiness to enter the banking union.

No problems are expected with regard to fulfilling the Maastricht criteria, which will be met for the third consecutive time this year, the Governor concluded.

Euro adoption does not require the implementation of any reform that we would not otherwise need, Vicegovernor of the Croatian National Bank Michael Faulend said at the panel discussion concerning the advantages and disadvantages of euro adoption.

Although the general public perceives euro adoption as a cause of significant price increase, analyses have shown that euro adoption caused only a negligent one-off price increase of 0.23 percentage points, Vicegovernor Faulend stressed. There are mechanisms that may be used to prevent unfounded price rounding, he explained. One of the mechanism is the dual display of prices in both the kuna and the euro. Furthermore, lists of retailers using unfair price rounding practices may be made and consumer protection associations may play a constructive role in the process. The most significant permanent benefit of euro adoption for Croatia will be the elimination of currency risk which is a considerable burden for the Croatian economy.

Macroeconomic indicators show that the trends have turned and that economic imbalances are continuously decreasing in Croatia. However, in order to improve the economic situation and reduce vulnerabilities to possible shocks, structural reforms are needed. We have witnessed improvement in terms of tax reform, tax disburdening, and the initiation of the pension and curricular reform. Although we would like to see higher rates of growth in Croatia, the current ones are sustainable and rest on healthy foundations, Vicegovernor Faulend added.