The Croatian Bureau of Statistics (CBS), in cooperation with the Croatian National Bank, developed a house price index (HPI) for Croatia. This index will be published on the website of the CBS on a quarterly basis starting with 20 January 2016. It will replace the hedonic real estate price index (HREPI) in Eurostat's database which has so far represented the developments of housing prices in Croatia. At the same time, up to the second quarter of 2015, the Croatian National Bank will cease with the construction and publishing of the HREPI.

The methodology and the obligation to develop and implement the index are defined by the Commission Regulation (EU) No 93/2013 of 1 February 2013 laying down detailed rules for the implementation of Council Regulation (EC) No 2494/95 concerning harmonised indices of consumer prices, as regards establishing owner-occupied housing price indices.

The new HPI and the old HREPI are very similar in terms of methodology - both are based on hedonic regression models as the methodology recommended by Eurostat for the development of such an index. The main difference among the indices is in the data sources on basis of which the indices are calculated. While HREPI was based on actual price movements of the sample of transactions collected by Real Estate Association, HPI is based on a significantly more detailed and comprehensive database which covers transactions in the trading of real estate on the territory of the Republic of Croatia that have been registered on the basis of applications of real estate transactions in the Tax Administration of the Ministry of Finance. The good properties of the database underlying the calculation of the HPI, first of all its scope and extensiveness, enable the construction of the index that credibly reflects the dynamics of the actual real estate prices in Croatia from the existing HREPI.

A good feature of the old HREPI is the time period on which it was constructed – from 1997 to 2015. At the time when the National Bank began creating the HREPI in 2007, the Real Estate Association database was the only one that had the transactions from a sufficiently long period of time (ten years) at its disposal, where for each property, apart from achieved and realized prices, it also included the necessary information about their attributes, which was needed to create a hedonic model. On the other hand, the data of the Tax Administration are only available from the fourth quarter of 2007 and therefore the values ​​of the HPI were calculated for that period. The possibility of building an index for the period before the fourth quarter of 2007 is being analyzed. In case that the data of the Tax Administration for the period prior to the fourth quarter of 2007 become available, the index would be extended backwards by including this data in the calculation. Alternatively, if such data are not available, the value of the index at that early stage would be extrapolated backwards using the dynamics of the corresponding sub-components of the HREPI.

HPI is based on a different stratification of the sample from that used in the calculation of the old HREPI considering that, according to the Commission Regulation No 93/2013, the HPI is defined so as to include the categories of expenditure at the level of the Republic of Croatia and separate categories for new and existing dwellings. HPI for the whole of Croatia is in that way calculated from the movement of six sub-indices of real estate prices which follow the trend of prices for new and old dwellings for three ad-hoc defined geographical areas of the Republic of Croatia – the City of Zagreb, the Adriatic coast and the rest of Croatia ("Other"). The next level of aggregation is the new and the old (existing) dwellings for the Republic of Croatia from which, ultimately, the aggregate HPI for the whole of Croatia is constructed. On the other hand, due to the availability of data, the HREPI is constructed on only two strata – the City of Zagreb and the Adriatic coast. Details of the stratification of the sample as well as the methodology of developing the new HPI and the database used will be published subsequently in a separate document.

Because of differences in the stratification and the difference between the data used, the comparability of the new HPI and the HREPI is limited. HPI is constructed using a database covering all transactions on the territory of the Republic of Croatia registered with the tax authorities. On the other hand, HREPI is constructed on the basis of a sample of sales of real estate acquired by the Real Estate Association mainly in the city of Zagreb and the Adriatic coast. The relative importance of these areas in the two indices is very different; while Zagreb was represented by a weight of approximately 70% in the HREPI, with HPI this number is significantly lower and is currently around 30%. Since the movement of the HREPI for Croatia is predominantly determined by the prices of the old (existing) dwellings in the City of Zagreb, its dynamics are more similar to those of the old dwellings in the Zagreb area according to the new HPI than according to the total HPI aggregate for the entire Republic of Croatia.

Since the HPI is based on a new data source which is being used for the purposes of official statistics for the first time, it should be noted that the HPI will be published less regularly compared to the HREPI. 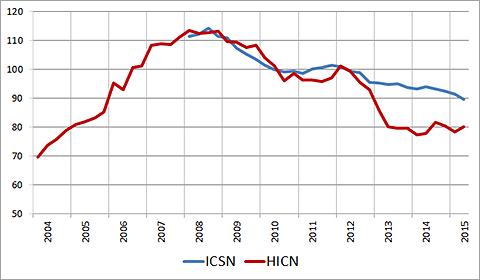