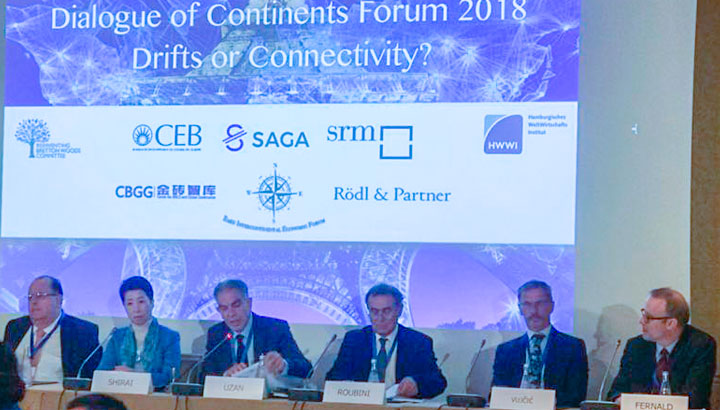 The Central and East European Countries have seen a significant improvement in their macroeconomic and financial conditions, said the Governor of the Croatian National Bank, Boris Vujčić in his address on 5 September 2018 at The Dialogue of Continents Forum held in Paris, organised by the Reinventing Bretton Woods Committee and the Hamburg Institute of International Economics.

Governor Vujčić spoke about the situation in CEE countries, explaining that the region is generally in good shape to withstand the impact of normalisation of the monetary policy. CEE countries, although a heterogeneous group, are well positioned for a significant change of financial conditions. Namely, the level of foreign debt in the region is not very high and has not grown during the unconventional monetary policy era, as opposed to the general debt growth trends; fiscal position is relatively stable, although without much fiscal room, while balance of payments flows are mostly sustainable without the substantial external imbalances of the pre-crisis period, said the Governor. The markets have recognised this strengthening of fundamentals and the reduction in the vulnerability of CEE countries, which have in this way started to be different and diverge from other emerging markets.

Participating in the panel discussion New Age of Monetary Policy: The Global Financial Cycle Normalization and Implications for Financial Stability together with the CNB Governor, Boris Vujčić, were Sayuri Shirai (PhD, Keio University and former Management Board Member of the Bank of Japan), John Fernald (Professor of Economics at INSEAD), Julio Velarde (Governor of the Central Reserve Bank of Peru), Angel Estrada (Executive Co-ordinator of DG International Affairs at Banco de España) and Nouriel Roubini (Professor of Economics and International Business at NYU Stern School of Business, and chairperson at Roubini Macro Associates).

In addition to the mentioned panel, seven other panel discussions were held, in which panellists were eminent international professors and scientists, and representatives of numerous international financial institutions and central banks.

New Age of Monetary Policy: The Global Financial Cycle Normalization and Implications for the Financial Stability – the presentation given by Governor Vujčić at The Dialogue of Continents Forum may be downloaded here.