Measuring the Similarities of Economic Developments in Central Europe: A Correlation between the Business Cycles of Germany, Hungary, the Czech Republic and Croatia 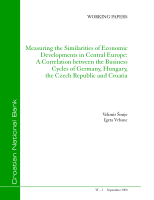 Following the research by Laurence Boone and Mathilde Maurel (1998, 1999) on the monetary union of the Central European countries with Germany and the European Union, scholarly curiosity has led us to investigate the relationship between the Croatian and German economies, as well as between the Croatian economy and the average European Union economy. Boone and Maurel (1999) concluded that the benefits of a common monetary policy for transition countries outweigh its costs. This paper determines the relationship between the Croatian and German economies and compares the Croatian economy with the economy of two advanced transition countries. The authors compared the economies by comparing business cycles illustrated by unemployment cycles in selected countries. Using the Hodrick-Prescott filter to detrend the time series of unemployment in Germany, Hungary, the Czech Republic and Croatia, the authors showed that there is a close correlation between cyclical unemployment fluctuations in all these countries and cyclical unemployment fluctuations in Germany. They also showed that there is a similarity between business cycles responses in three selected countries during the 24 months following the initial shock coming from the German economy and even more similarity between their responses to the shock during the first 12 months. The authors were cautious in drawing the conclusions that the results show that the selected countries are the optimum currency area as defined by Mundell. They warn about the possibility that cyclical coordination is endogenous, i.e. that it is the consequence of the implicit or explicit pegging of the exchange rates of advanced transition countries to the German mark exchange rate during a major part of the analyzed period (1992-1999). However, the importance of the results on cyclical coordination in considering the optimal exchange rate regime is not denied in this paper. The most important achievement of this research is that findings regarding Croatia, which showed a close convergence between Croatian and German unemployment, are added to the already known results on the close convergence of cyclical fluctuations in Central Europe.