Foreign Banks in Croatia: Another Look 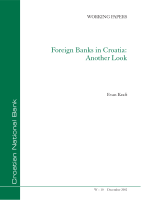 After a period of entry mainly through greenfield investment, foreign banks purchased several of the largest Croatian banks in late 1999 and 2000. This paper follows a previous study completed in early 2000 and reviews the effects of foreign entry on the Croatian banking market, using the results of written and oral interviews and balance sheet data. The main findings are that foreign banks have played a major role in increasing competition, bank efficiency and the quality of banking products and services. In addition, regression analysis shows that de novo foreign banks founded through greenfield investment have significantly better asset quality than other banks, and have increased overall lending as well as lending to households and lending to enterprises more rapidly than other types of banks.