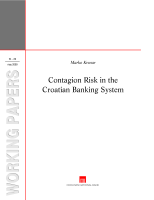 This paper explores systemic risk in the Croatian interbank market, focusing on interbank credit risk. In theory, bank contagion depends on the size and structure of the interbank market. It is found that the dimension of the Croatian interbank market is small and that it can be described as a multiple money centre structure, with bilateral exposures concentrated on a few big banks. In order to assess contagion risk in the banking system, simulations of idiosyncratic bank failures and macroeconomic shocks were performed. Because of the shallow domestic interbank market, the first order requirement for bank contagion due to an idiosyncratic failure is not fulfilled. This requirement is also not satisfied in the case of the exposures to foreign banks, although they five times exceed the level of the domestic interbank market. Bank contagion stemming from macroeconomic shocks, although theoretically possible, could only materialise in highly improbable scenarios.