How Competitive is Croatia’s Banking System? A Tale of Two Credit Booms and Two Crises 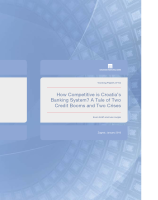 The paper provides an overview of competition in the Croatian banking market for the 1994-2016 period, updating some results from earlier work but also adding new estimates based on methodological improvements in the literature. While the CR(2) indexes of concentration remained fairly stable after 1998, privatization and acquisitions led to rapid growth of the three next largest banks, so that the CR(5) indexes rose. Other competition measures tend to mirror this, with competitive behavior falling somewhat, but not uniformly. We argue that the largest banks did not always take advantage of the market power they possessed for the purpose of increasing prices. Mark-ups estimated with the Lerner index increased, especially after the onset of the 2008 crisis, but increased margins were the result of marginal costs falling even faster than prices. We do find some association between higher mark-ups and greater inefficiency, creating some support for the “quiet life” hypothesis. However, the strong pace of marginal cost decreases and the passing on of lower costs (and better quality) to consumers, as well as the fact that prices already are at low levels, all temper this conclusion substantially.