We need to start adapting to new technologies right now 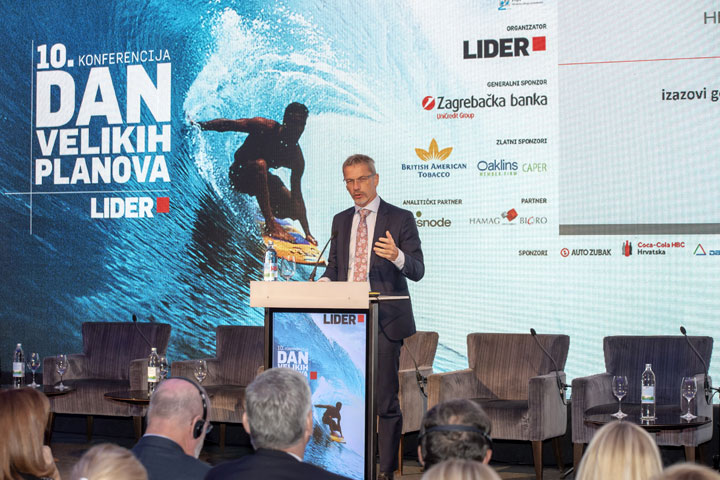 "We need to start adapting to new technologies right now. If we succeed at that, technology can help us solve the problems of population ageing and labour force deficit", said Boris Vujčić, the governor of the Croatian National Bank, at the 10th conference Dan velikih planova ("The Day of Great Plans"), organised by the business weekly Lider, held on 26 September 2018 in Zagreb.

GDP is expected to grow at a level slightly below 3% in 2019, with the highest rate of growth expected in exports, personal consumption and investments, Vujčić emphasised. Trade war and the slowdown in industrial production in Germany and Italy could have repercussions for Croatia, he added. The upward trend in employment continued in Croatia, while the Survey on the access to finance of SMEs conducted by the Croatian National Bank showed that labour force deficit is the second biggest problem faced by Croatian companies, the first still being the complicated and frequently changing regulations.

Inflation should remain at a level close to or below 2%. In addition, the balance of payments current and capital accounts are expected to remain in surplus, while the use of EU funds is expected to increase. Indicators of indebtedness, external and public debt, which affect the country's rating, are continuously declining.

Monetary policy is greatly determined by the substantial surplus in the balance of payments current and capital accounts, the governor explained. Since surplus is expected in the following year as well, monetary policy will have to respond by a vigorous purchase of foreign exchange, which will result in an increase in the central bank's reserves and a rise in the structural liquidity surplus in the market. Liquidity surplus contributes to low interest rates and a healthy growth in the banks' lending activities.

Nevertheless, we should not be complacent about Croatia's rates of growth, Governor Vujčić warned. Croatia was among the EU countries with the slowest growth rates in total production in the pre-crisis period as well, which suggests that there are considerable structural problems present in the economy. Demographic trends and population decline and ageing will contribute to a decrease in the contribution of labour to GDP and a drop in the number of working-age people. This will lead to additional pressures on the pension and healthcare system.

Croatia is one of the countries with the lowest investments in research and development and the weakest innovation systems. Croatia's investments in education are only slightly lower than the peer countries' average, but the students' results are relatively weaker. A reform is therefore essential, not only in primary and secondary education, but in higher education as well, the governor noted.

The governor also elaborated on the growing significance of intangible assets, as such investments result in higher productivity growth rates. They also carry greater risk, which is why they are more frequent in larger companies that can afford such a risk more easily.

New technologies can boost productivity and enable a better allocation of resources on a global scale as well as improve the quality of life and extend life expectancy. However, they have disadvantages as well: they reduce the demand for certain professions and increase inequality among enterprises based on their ability to introduce new technologies and invest in intangible assets. In addition, new technologies, business automation and artificial intelligence development may render certain professions obsolete. It is therefore necessary that the society prepares itself. An education encompassing the development of skills unattainable by machines, the adoption and implementation of new technologies and interdisciplinarity is key for the future.