What can CNB do for consumers – credit institutions' clients? 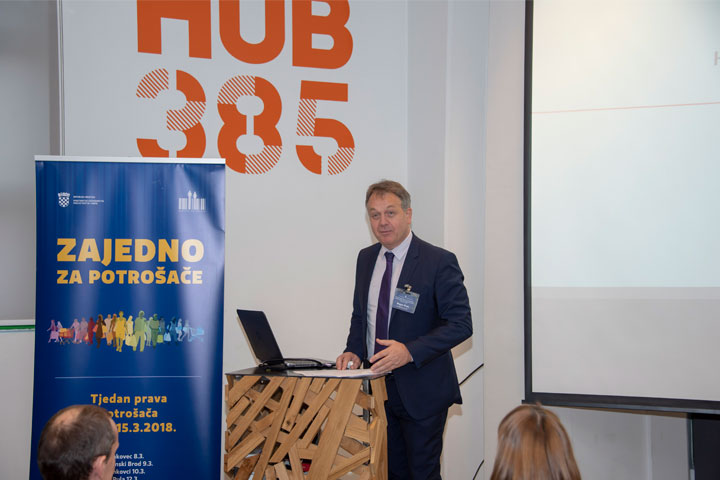 "CNB's continuous activities aimed at improving the quality of protection of consumers: banking and financial services users, payment services users and electronic money holders contribute to the preservation and strengthening of trust in the financial system, thus improving and maintaining its overall stability," said the CNB Vicegovernor Bojan Fras during the Interdepartmental Discussion on the Improvement of Consumer Rights Protection Policy in the Republic of Croatia, organised by the Ministry of Economy, Entrepreneurship and Crafts on 12 December 2018.

"Consumer protection is a relatively new area of central banking, which started to come into focus after the great financial crisis in 2008. In order to satisfy the newly-arisen requirements, the CNB in 2011 set up an organisational unit dedicated to consumer protection monitoring," said Vicegovernor Fras, adding that the CNB besides that conducts a whole range of consumer protection related activities, both including those that directly derive from its legal powers and those that, while not specifically prescribed, complement the CNB's function and role as a central bank.

Speaking about CNB's activities carried out under its legal powers, Vicegovernor Fras pointed out the CNB's supervision of credit institutions, which includes the verification of their compliance with internal bylaws, contracts with consumers, laws and subordinate legislation. When divergent practices are established, the CNB takes appropriate measures. Its legal powers also include acting on consumer complaints so that each complaint is addressed and appropriately processed. In the period until November 2018, the CNB received 630 consumer complaints, which is an increase compared with 604 in the previous year, while the highest number of complaints was recorded in 2015 (2,605) and 2016 (1,370) due to the conversion of Swiss franc loans.

The CNB also reviews the practices of service providers and enhances the regulatory framework. The related actions include the adoption of five laws in the last two years, which have improved the regulatory framework for consumer protection falling within the central bank's scope of responsibility. Furthermore, the CNB issues recommendations, such as the Recommendation to mitigate interest rate and interest rate-induced credit risk in long-term consumer loans, adopted in the previous year, and publishes information, explanations, answers to frequently asked questions and warnings to consumers at its website.

Vicegovernor Fras mentioned one more central bank's activity: increasing service provision transparency, e.g. by means of the information list with the offer of loans to consumers and the comparison of bank fees for the most often used payment services, which are available at the CNB website and on the mobile application mHNB. The CNB has a long tradition of organising training on financial and economic topics and puts a special emphasis on the education of young people, primary and secondary school students, who are yet to make their financial decisions. The lectures held at the CNB in the previous two years were attended by over 5 thousand participants. In 2018, until the end of November, the CNB organised training in the area of finance for 1,056 participants, while 1,817 pupils and students attended lectures on topics related to the central bank's scope of responsibility. In 2017, the CNB organised training for 2,679 participants, 909 of which attended lectures on financial literacy.

In addition to stepping up financial education activities, a special focus should be given to a balanced approach to the further upgrade of the regulatory framework so as to prevent its reducing the accessibility of banking products and services to consumers. Also, with the potential for consumer protection in the form of new regulations used up to a considerable degree in the last few years, special attention should be directed to raising the awareness of consumers on the need to get timely information and assume responsibility for their own choices and actions. Vicegoverner Fras announced the CNB's plans to use education channels that represent a novelty in a central bank setting, including video materials and animation videos on financial literacy and emphasised the need to include financial education topics into education curriculums. Central to this aim are the education of educators programmes, already commenced at the CNB.

The activities of their institutions in the area of consumer protection were presented by Tugomir Majdak, the State Secretary of the Ministry of Agriculture, Monika Udovičić, the Assistant to the Minister of Tourism, Lidija Kralj, the Assistant to the Minister of Science and Education, Tomislav Ridzak, a Member of the Board of the Croatian Financial Services Supervisory Agency, Miran Gosta, the Director of the Croatian Regulatory Authority for Network Industries and the numerous representatives of Croatian consumer protection associations.

The State Secretary of the Ministry of Economy, Entrepreneurship and Crafts, Nataša Mikuš Žigman, stressed in her opening remarks the importance of interdepartmental cooperation in the area of consumer protection and presented the activities conducted by the Ministry in cooperation with other ministries, regulatory authorities, agencies and associations.